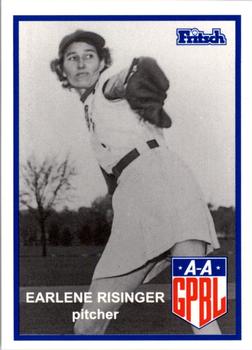 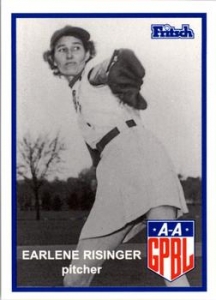 The Racine Belles kicked off their road trip in Grand Rapids with an early-summer heat wave lingering over Michigan in June 1949.1 In the series opener, the Belles and Chicks were locked in a 2-2 tie when the game was called after 15 innings because of the All-American Girls Professional Baseball League’s (AAGPBL) 11:30 P.M. curfew.2

The next day, June 30, the mercury rose to 92 degrees, and the two teams surely were hoping for a regular nine-inning affair that evening. Instead, the sweltering middle game of the series lasted two innings longer than the opener.

The three-game set featured a matchup between the two pennant winners from 1948, both of whom were upset in the second round of the playoffs. The 1949 season had started off much better for Grand Rapids than Racine. The Chicks came into the second game of the series in third place with a 23-15 record, 4½ games behind the first-place Rockford Peaches. The struggling Belles were languishing in sixth place with a 16-23 mark, although they still held a one-game lead over the Muskegon Lassies for the final playoff spot.3

The starting pitchers in the second game, Earlene “Beans” Risinger and Erma Bergmann, knew each other well, as both had toiled for the Springfield Sallies in 1948. Because of poor attendance and community support, the Sallies had been turned into a road team in mid-June,4 and their players spent the last 2½ months of the season living out of their suitcases. Since the Springfield and Chicago squads were turned into developmental teams for the 1949 season, the pair were subject to reassignment by the league. Consequently, Risinger was allocated to Grand Rapids and Bergmann was sent to Racine.5

Bergmann, a former outfielder, came into the contest with a 3-6 record for the Belles.6 The 25-year-old right-hander had been converted into a pitcher in 1946, with impressive results.7 Bergmann used a side-arm delivery to toss a no-hitter in 1947 en route to helping the Muskegon Lassies win the pennant.8

Risinger used an overhand delivery with a three-quarters arm slot.9 The 22-year-old Oklahoma native was coming off a mediocre rookie campaign with Springfield. After picking up several key pitching tips from Johnny Rawlings while on a winter tour of Central and South America,10 Risinger was enjoying a much-improved 1949 season.

The 6-feet-2, 137-pound righty was one of the tallest players to ever play in the AAGPBL. With her high leg kick,11 Risinger was an imposing figure on the mound, especially when the pitching mound was still only 50 feet from home plate in June 1949.12 “Beans was fairly tall with those long arms and legs,” recalled Doris Sams, one of the AAGPBL’s all-time greats. “So when she started to pitch and uncoiled and hit her stride, the batter was darn near shaking hands with her.”13

Risinger used an overpowering fastball along with a curveball and changeup to keep hitters off balance.14 “I could throw the ball past most of them, but I got accused of pitching high and tight,” she explained. “When my fastball went in really good, it tailed in toward the right-handed batters.”15 Although Risinger didn’t always have great control, she was what twenty-first-century commentators called “effectively wild.”16

Racine scored against Risinger in the top of the second without the benefit of a hit. Madeline “Maddy” English walked and stole second and third.17 She scored when Margaret “Marnie” Danhauser (later Brown), who was hitting a feeble .116, laid down a successful squeeze bunt.18

In the bottom of the fourth, Grand Rapids right fielder Connie Wisniewski singled, stole second, and advanced to third on an error by Sophie Kurys. Wisniewski scored on Doris “Sadie” Satterfield’s long fly ball,19 and the game was tied, 1-1.

The teams exchanged single runs in the sixth inning. In the top of the frame, Racine left fielder Edie Perlick (later Keating) walked, stole second, and advanced to third on an opposite-field single by English.20 The Belles pulled ahead, 2-1, when they executed an electrifying double steal, with Perlick stealing home and English advancing to second.

Grand Rapids got that run back in the bottom of the inning. Wisniewski walked, stole second, and scored on a single by Inez “Lefty” Voyce.

The score stayed tied, 2-2, for the next 10½ innings, as Risinger and Bergmann settled into a lengthy pitchers’ duel. The next great scoring chance came in the bottom of the 14th, when Grand Rapids loaded the bases with one out. But Alma Ziegler got trapped off third on an attempted squeeze play, and Doris Neal flied out to end the Chicks rally.

Grand Rapids center fielder Dorice “Dorrie” Reid was still in search of her first hit of the game when she led off the bottom of the 17th.21 She beat out an infield hit near the mound, and when Bergmann threw wildly to first, Reid advanced to second base.

The error by Bergmann proved costly. Reid went to third on an infield out by Risinger for the first out of the inning. The next batter, Marilyn “Corky” Olinger, hit a fly ball to deep center field, allowing Reid to tag up and trot home with the winning run. Risinger and her Grand Rapids teammates had come away with a gutsy 3-2 victory.

In an impressive feat of endurance, Risinger and Bergmann had gone head-to-head for 17 innings in a heat wave. While pitch counts were not available, it is likely that they each threw more than 200 pitches in the game.22 The Grand Rapids Herald reported that “Beans entered the marathon looking trim and slim. At the finish she looked even slimmer.”23

Even more remarkable was the stamina shown by Grand Rapids catcher Lavonne “Pepper” Paire (later Davis). The 25-year-old backstop had caught all 15 innings of the first game, followed by another 17 innings the next night. Paire handled nine more innings in the series finale, giving her 41 innings behind the plate in roughly 50 hours. She had a forgettable series with the bat, but her defense was impeccable: 24 chances, no errors, no passed balls, and one double play.24

The Belles’ heartbreaking loss would come back to haunt them. The race between Racine and Muskegon for the final playoff spot went down to the final day of the season, with the Belles finishing up with a doubleheader in Kenosha and the Lassies in Grand Rapids for a twin bill against the Chicks.25 The Belles appeared to be a shoo-in for the playoffs, since they held a two-game lead over Muskegon with two games to play and the Lassies had lost 10 of their 14 games against Grand Rapids up to that point in the season. One Racine win or one Muskegon loss would qualify the Belles for the postseason. Racine fans were stunned when the Belles dropped both games to Kenosha and the Lassies swept the doubleheader against Grand Rapids, giving Muskegon the final playoff spot by 2 percentage points in the standings.26

The Racine Journal-Times called the Belles’ campaign “the most disastrous season in their seven-year history.”27 The 1950 season was even worse for the Belles, as they missed the playoffs for the second straight time and attendance plummeted to only 29,000 fans.28 After three years of financial losses, the franchise was moved to Battle Creek, Michigan, for the 1951 season.29

Grand Rapids finished in third place in 1949 with a 57-54 record, 18 games out of first place. The Chicks defeated Fort Wayne and Muskegon in the first two rounds of the playoffs before dropping the best-of-five championship series to Rockford in four games. It was the second of three consecutive league championships for the powerful Peaches.

Her best season came in 1953 when she recorded a 1.75 ERA and was one of four pitchers named to the league’s all-star team.

Although her 17-inning victory over the Belles was an impressive achievement, it wasn’t the highlight of her career. That came when Risinger won the clinching game of the 1953 championship series over the Kalamazoo Lassies.30 Nursing a one-run lead with the bases loaded and two outs in the final inning, Risinger faced Sams, a two-time winner of the AAGPBL’s Player of the Year Award. The hard-hitting outfielder, who had homered in her previous at-bat, was confident as she stepped into the batter’s box. Risinger reared back and struck her out on three straight fastballs, ending the series. “She really turned loose with those [pitches],” said Sams. “I don’t remember even seeing those go across the plate.”31

Thanks to Cassidy Lent of the Giamatti Research Center in Cooperstown for providing a copy of Earlene Risinger’s Hall of Fame file. This story was fact-checked by Kurt Blumenau and copy-edited by Len Levin.

In addition to the sources cited in the Notes, the author consulted AAGPBL.org and The All-American Girls Professional Baseball League Record Book. Standings were referenced in the Kenosha Evening News, South Bend Tribune, and Racine Journal-Times. Box scores for the entire Belles-Chicks series were found in the Racine Journal-Times.

3 The league scrapped the divisional structure in 1949 when it contracted from 10 to 8 teams. The 1948 season was the only one in the league’s 12-year history that featured two divisions. Six of the eight teams qualified for the playoffs in 1949.

12 On July 16, 1949, the pitching mound was moved from 50 feet to 55 feet away from home plate. That same day the league began using a ball with a 10-inch circumference and red seams. It replaced the previous ball that was 10⅜ inches in circumference and had white seams. “AAGBL Adopts Smaller Ball, Sets Post Season Playoffs,” Racine Journal-Times, July 12, 1949: 11; “Sox vs. Chicks at Playland with New Ball,” South Bend Tribune, July 22, 1949: 29.

14 Marilyn Jenkins, “A Memorable Game,” clipping in Risinger’s file at the Baseball Hall of Fame.

21 The author deduced that Reid led off the inning. Risinger made the first out of the inning and Marilyn “Corky” Olinger ended the game with a fly ball. There were no other baserunners in the inning.

22 Since Risinger gave up eight hits, walked seven, and struck out nine, it is highly likely that she threw over 200 pitches. An average of 12 pitches per inning works out to 204 pitches in a 17-inning game. Bergmann may have also broken the 200-pitch mark, since she gave up nine hits, walked four, and struck out three.

24 Paire was on the tail end of a double play with center fielder “Dorrie” Reid in the series opener.

26 The Belles finished with a 45-65 record. The Lassies had a 46-66 mark. Racine played two fewer games because of rainouts that were not rescheduled. “Lassies Beat Belles Out of Playoff Spot by .002.”