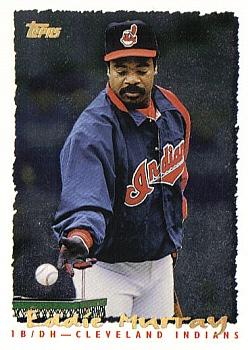 It is one of the gold standards of major-league baseball: the 3,000-hit club. More than 16,500 players have participated in at least one major-league game. Of those, only 19 players had exceeded more than 3,000 hits in their career. On June 30, 1995, Eddie Murray became the 20th member to become immortalized on that coveted list. (As of 2018, the list has grown to 32 players.)

Murray was as accomplished a player as there was in major-league history. Beginning in 1977, when he was named AL Rookie of Year while with Baltimore, Murray was the epitome of both greatness and class in his 17-year career before joining the Cleveland Indians in 1994. His defense was flawless; he won the Gold Glove Award three years in a row (1982-1984). Murray’s durability was his calling card: He played in more games at first base (2,413) than any other player in the major leagues. He was recognized twice by The Sporting News as its first baseman on their postseason All-Star Teams (1983, 1990). Murray was the power that drove the Baltimore Orioles to a world championship in 1983. He led the team in homers (33) and RBIs (111). You won’t find his name among the yearly league leaders in offensive categories too often. Yet, when Murray retired after the 1997 season, he was second all-time to Pete Rose in hits (3,255) by a switch-hitter, and one of only three players to total 500 home runs and 3,000 RBIs (Willie Mays, Hank Aaron).

But he was a leader between the lines and in the clubhouse. The Indians signed Murray and his former Baltimore teammate, pitcher Dennis Martinez, in late 1993 to instill some leadership in the young Tribe players. In 1995 they signed Dave Winfield and Orel Hershiser, again emphasizing what it takes to win from two more proven stars.

For the Cleveland Indians, they were enjoying life in the penthouse. They sported a 19-7 record in the month of May and coming into the last day of June, they were 19-8 for the month. They led the majors with a 40-17 record and led the Kansas City Royals by nine games in the American League Central Division. There were no serious contenders to challenge them for the division title. The Indians were playing downhill on most evenings, surely a different sight for Cleveland fans.

As the countdown began to the magical number of 3,000, the Indians were catching the fever. Murray, who had little to say to the media, did not comment on the streak as it built to a climax. That didn’t stop his teammates from marveling at his accomplishment. “This is exciting,” said Charles Nagy. “It’s something you’ll remember being a part of for a long time. With the exception of Dave Winfield, probably none of us have seen this. And it’s neat because Eddie is such a good guy, and a good team guy.”1

As Cleveland and Minnesota got ready to tangle in the second game of a four-game set at the Hubert H. Humphrey Metrodome, the focus naturally shifted to Murray. The Indians’ designated hitter for the evening was sitting at 2,999 hits. It was only a matter of time before he joined two Indians legends who had each attained their 3,000th hit in an Indians uniform, Nap Lajoie (1914) and Tris Speaker (1925).

Cleveland and Minnesota each scored a run in the third inning. Martinez, the Cleveland starter, was off to a great start in the season with a record of 6-0. Minnesota starter Mike Trombley was at the opposite end of the spectrum; he came into the game with a 0-2 record. But both pitchers battled to a 1-1 tie through five innings.

Albert Belle led off the sixth inning with a double to left field. Into the batter’s box stepped Murray. He had walked and lined out to center field in two previous plate appearances. On a 0-and-1 fastball from Trombley, Murray lined a single between first and second base into right field. He had his 3,000th hit. The Indians dugout emptied as Murray’s teammates rushed to first base to congratulate him. The Metrodome scoreboard showed a video of his career. Murray tipped his batting helmet and cap to the crowd of 27,416, who cheered wildly.

When the game resumed, Jim Thome struck out. Manny Ramirez’s grounder forced Murray at second base, but Belle scored on the play for a 2-1 lead. Wayne Kirby added a run with his first home run of the season in the seventh inning and Cleveland won, 4-1. Martinez raised his record to 7-0, striking out seven in eight innings. José Mesa came on in the ninth to save his 20th game in as many opportunities.

“I enjoyed it,” said Murray. “We’ve had a lot of fun in Cleveland. This is the wildest group of guys I’ve ever played with. The music in the locker room, the jokes we play on each other, the reporters who come into our locker room must think we’re crazy.”2

Murray met with the media after the game. When he returned to the locker room, most of the players were on the bus waiting to return to the hotel. “I’m happy for him,” said Omar Vizquel. “I think it was a lot of pressure on him. I think all this publicity bothered him a little bit and I’m pretty sure he wanted to have that over.”3

The Indians went on to win the Central Division and snap a 41-year postseason drought. They marched through the AL playoffs but lost to Atlanta in the World Series.

Eddie Murray played two more seasons. He was elected to the National Baseball Hall of Fame in 2003. “He was the best clutch hitter during the decade that we played together, not only on our team, but in all of baseball,” said Mike Flanagan.4