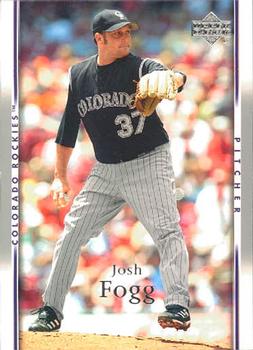 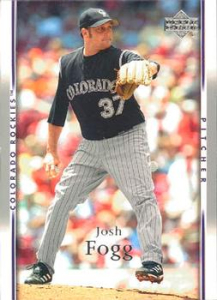 The host Mariners were ending their best month in three years, a June that had seen them climb to 41-39, only two games behind the Oakland A’s in the American League West. Their opponent for the Friday night interleague game, the Colorado Rockies, were contenders in the National League West, sitting only one game back behind the division-leading Padres.

The fans were treated not only to a terrific pitching duel, but to the fastest game in the history of Safeco Field, and the briefest nine-inning game in the Rockies’ 14-year history.

The two starting pitchers were both in the midst of fairly middling seasons. The Rockies’ starter, Josh Fogg, was 5-5 in his first season with Colorado. The Mariners countered with 43-year-old Jamie Moyer, who had been a mainstay of the Mariners rotation since 1996, but was only 5-6 at the midpoint of the 2006 season.

Both pitchers would go the distance “by pitching and not by being overpowering,” wrote Tacoma News-Tribune reporter Darrin Beene. “Neither threw a pitch over 90 mph but each tied their opponents into knots by changing speeds and locations.”1

Moyer started the evening by striking out Jamey Carroll, but then got into trouble by walking Clint Barmes and Todd Helton. But Moyer fielded a comebacker from designated hitter Matt Holiday and threw to second baseman Jose Lopez to start a double play and erase the scoring threat.

Fogg also encountered some minor trouble in the bottom of the first. After leadoff hitter Ichiro Suzuki flied out to left, Adrian Beltre singled. But the Rockies starter induced Jose Lopez to ground to second as the Rockies also ended the first with a double play.

Both pitchers then settled in nicely for the next three innings. Moyer allowed two hits and a walk but was again helped by a double play in the second, while Fogg pitched three perfect innings to keep the game scoreless after four innings.

In the fifth the Rockies broke the tie with some traditional small ball. Brad Hawpe led off the inning with a walk, Yorvit Torrealba sacrificed him to second, and after a groundout by Choo Freeman, Rockies leadoff hitter Jamey Carroll stroked a single to left field to bring home Hawpe with the game’s first run.

Moyer set down the Rockies in order in the sixth, but when Hawpe batted again in the seventh with two outs, the Rockies right fielder launched a solo home run over the center-field fence to add to the Colorado lead. A single by Torrealba followed but Moyer got Freeman to fly out to Suzuki, then set down the final six Rockies batters in order to finish the game even stronger than he’d started.

Throughout, though, the Mariners could not solve Fogg. Seattle got the leadoff man aboard in the fifth and sixth innings, and both times saw any scoring opportunity vanish when the second batter in each inning grounded into a double play.

Fogg recorded his only strikeout of the night in the eighth inning when Raul Ibanez was called out to start the frame. The Rockies starter was perfect over the final three innings to complete the 2-0 Colorado victory.

Thanks to the three double plays turned by the Rockies, Fogg faced the minimum number of batters and threw only 91 pitches in the game as he and Moyer combined to complete the contest in a snappy 1 hour and 52 minutes.

Fogg “threw breaking balls when fastballs were expected and the other way around,” noted Seattle Times reporter Greg Bishop, “He threw about 84 in the first four innings and about 88 mph thereafter.”2 For Fogg, it was only the second complete game and first (and only) shutout of his major-league career. The Rockies starter finished the season with the best record of his career (11-9).

The veteran Moyer certainly was no slouch that night either. He threw 116 pitches in his complete-game loss, which dropped his record to 5-7 despite a 3.39 ERA. “Jamie was outstanding,” said Mariners skipper Mike Hargrove. “I would take that every outing. We just could not get anything going.”3

The Rockies took two of the three games in the weekend series. Both teams entered July and the second half of the season on an optimistic note, but both fizzled down the stretch and fell out of contention. After this game, they played under .500 the rest of the year. The Mariners went 37-44 the rest of the way to finish 78-84, 15 games behind the AL West champion A’s. The Rockies stumbled even worse, going 35-48 for the remainder of the season to finish the season tied for fourth with the Diamondbacks in the NL West, 12 games behind Padres.

As the Mariners slid out of contention, Moyer was traded to the Philadelphia Phillies on August 19 for two minor leaguers. He pitched well down the stretch for the Phillies, going 5-2 in eight starts, although he was unable to help the Phillies catch the NL East champion Mets.

What I remember from this game at the 2006 SABR convention in Seattle is the presence of a number of Japanese fans among the 31,612 there to cheer on Mariners right fielder Ichiro Suzuki. The All-Star (a 2001 Rookie of the Year and AL MVP) went hitless in three at-bats that evening. He had six putouts in the field. Suzuki went on to lead the AL in hits for the 2006 season, which began a streak of five consecutive years leading the league in that category. He also won his sixth Gold Glove Award.

With the game ending before 9:00 P.M., the skies in Seattle were still not dark. The early conclusion of the game created a bit of a vacuum in the SABR convention schedule. I recall attendees making their way back to the hotel lobby by bus or by foot, with a large crowd standing around wondering how to fill the remaining hours of the evening. I ended up with a group that retired to a local brewpub for a few more hours of baseball talk as we continued to marvel at the thought of completing a twenty-first-century major-league game in under two hours.

The author would like to thank fellow SABR member Stan Opdyke for providing a game account from the Tacoma News-Tribune.