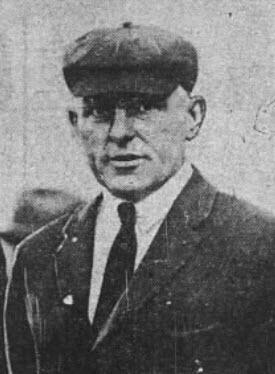 The Syracuse (New York) Stars, managed by Burt Shotton, were off to a splendid start to the 1927 season and were sitting atop the International League standings with a 32-17 record through games of June 3. They hosted the Rochester (New York) Tribe, managed by George Stallings, in a four-game series at Star Park in Syracuse and won two of the first three games of the series. The Tribe, with a 21-22 record, was tied for fifth place in the eight-team league.1

In the final game of the series, on Saturday, June 4, both managers chose a southpaw as their starting pitcher, Bill Hallahan for the Stars and Milt Shoffner for the Tribe. The Stars were clear favorites to win the contest. Hallahan led the league in strikeouts, and each of the first seven men in the Stars batting order had a batting average above .320.2

The umpires for the game were Gerald Hayes, Lee Fyfe, and Bob Clarke. The 52-year-old Hayes,3 the home-plate umpire, had more than 20 years of experience umpiring in the minor leagues. In 1925, while working in the American Association, he was traded to the International League for umpire Doll Derr, proving that even umpires can be traded.4 According to the Minneapolis Star Tribune, Hayes was a “colorful little fellow” who was “popular with players and fans alike.”5

The players, managers, and umpires, and the 2,500 fans who attended the game, were chilled by “freakish high winds, reaching hurricane intensity,”6 accompanied by intermittent rain. The game began at 3:00 P.M. despite the inclement weather. The Tribe scored a run in the first inning aided by an “impossible gale,” as both Rabbit Maranville and Eddie Murphy hit windswept doubles.7 The visitors tallied a second run the next inning, on a base on balls given to Doc Silva and a double by pitcher Shoffner.

Wild Bill Hallahan was true to his nickname. He walked two more batters in the third inning, and after allowing a run-scoring single to Joe Manger, he was replaced on the mound by right-hander Allyn Stout. Silva’s sacrifice fly then brought in the Tribe’s fourth run of the game.

The Stars fought back with three runs in the bottom of the fourth. Joe Brown singled to center field, Louis Benson doubled off the left-field fence, and Bob Morrow also doubled to deep left, scoring Brown and Benson. Stout followed with a single that sent Morrow home.

Both teams scored three times in the fifth. Manger slugged a three-run homer over the right-field fence in the top of the inning. In the bottom half, Don Hurst singled up the middle with one out and went to third base on Brown’s single to left center. Benson also singled, scoring Hurst, and Morrow doubled to deep right to drive in Brown and Benson. Gus Mancuso, pinch-hitting for Stout, doubled to the left-field fence, but Morrow was thrown out at the plate. After five innings, the score was Rochester 7, Syracuse 6.

Paul Kinney, a right-hander, replaced Stout and pitched a scoreless sixth inning for the Stars. But after he walked the first two batters in the seventh, he was replaced by another right-hander, Hal Haid, who was able to get out of the jam.

Meanwhile, Shoffner continued to pitch for the Tribe. With two outs in the bottom of the eighth, Harry Layne singled off him and Homer Peel followed with a long home run, “a terrific clout over the fence in deep left,”8 to give the Stars an 8-7 lead.

The rain now came down especially hard, and the Syracuse players and fans pleaded with umpire Hayes to call the game. But Hayes allowed it to continue, and Rochester came to bat in the top of the ninth trailing by a run.

Murphy led off with a single. Lee Head tapped a slow roller to Benson at short, who threw to second baseman Carey Selph for a force out at second base (the high throw prevented a double play). Eddie Onslow’s grounder to Selph looked like a game-ending double play, but it got past Selph and went into right field, allowing Head to advance to third base. Manger then drew a walk to load the bases.

The rain drenched the players and umpires, and those fans sitting in the uncovered sections of the ballpark. With the bases loaded and one out, Edward Kunesh, the son of a Slovakian tailor,9 stepped to the plate to face Haid. In the seventh inning, Haid got Kunesh to ground into a double play. This time Kunesh came through with an RBI single. Haid struck out the next two batters, and the game moved to the bottom of the ninth deadlocked at 8-8.

Suddenly, the rain stopped and “the sky cleared and brightened.”10 Shoffner retired Benson and Morrow, and had two quick strikes on Haid. The next pitch appeared to be low and wide, but Hayes called it strike three, declared the game over, and sprinted toward the clubhouse.

The crowd had endured the wind and rain for nine innings, “refusing to allow any of the elements to drive it away from the excitement,”11 but now, with clear skies, there would be no resolution to the battle. The final score was Rochester 8, Syracuse 8. An angry throng descended onto the field and “swarmed threateningly” around Hayes.12 Three policemen escorted him to the dressing room, as the mob hurled insults and pop bottles.

Manager Shotton, along with Warren C. Giles, the Stars’ 31-year-old president, went to Hayes and protested his decision, but Hayes “was adamant and refused to go back on the field,” saying that he did not want to stay out there and catch cold.13 That evening, Giles wrote a letter complaining about Hayes to John Conway Toole, president of the International League. But the next day, the Syracuse American admitted that the game “should never have been attempted in the first place” and described the damage caused by the storm:

“Five names are on the casualty list, many others had narrow escapes, thousands of dollars damage to crops and buildings was done and business and traffic in the city was demoralized during a high windstorm. … A majority of the baseball fans were forced to walk to [and from] the park … as [fallen] trees and lack of power hampered [electric trolley] service. … For several hours the meter at the [weather] station showed the south wind maintained a velocity of 40 miles an hour although in some sections it appeared gusty and was estimated to reach at least 60 miles an hour.”14

Game coverage in the June 5, 1927, issues of the Syracuse American and Rochester Democrat and Chronicle.