(game forfeited to Rangers due to on-field riot) 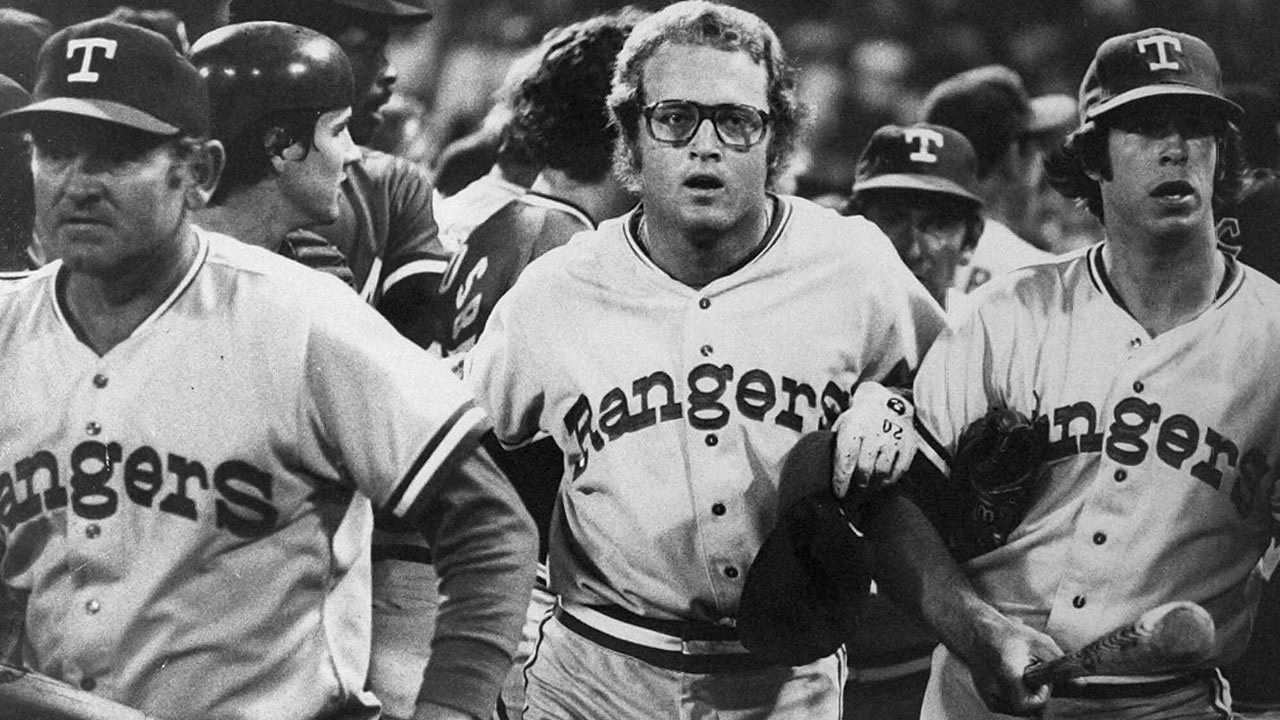 Fans of baseball in the 1970s surely recall the jingle that touted, “Baseball, hot dogs, apple pie, and Chevrolet, they go together in the good ol’ USA.”1 That memorable advertising campaign debuted in 1974, the same year that a number of major-league clubs believed that beer also mixed so well with baseball that it should be offered for 10 cents per cup on select occasions. When a commonsense limit of two beers per person was set and fans were given chips that were good for the purchase of their discounted beers, as was done by the Minnesota Twins and Milwaukee Brewers, then 10-Cent Beer Night was simply a nice price break for fans.2 However, when a six-beers-per-purchase limit, without any oversight to keep fans from returning repeatedly, was instituted, the result was an all-out riot in the ninth inning of the Cleveland Indians’ game against the Texas Rangers at Cleveland Stadium on June 4, 1974.

To place the Cleveland riot in full perspective, it is helpful to know of events from the Rangers’ own 10-Cent Beer Night in Arlington, Texas, on May 29, in which the Indians were the opponent. In the bottom of the fourth inning of that game, Texas’s Lenny Randle “slammed his shoulder into the midsection of Jack Brohamer,”3 Cleveland’s second baseman, in an attempt to break up a double play. Indians reliever Milt Wilcox retaliated in the eighth inning with a pitch “that actually passed about six inches behind Randle’s head.”4 Randle laid down a bunt on the next pitch and intentionally collided with Wilcox as he ran up the baseline; for good measure, he also “tried to butt first baseman John Ellis square in the nuts,” at which point fisticuffs ensued.5 Once order was restored on the field, some overly zealous Rangers fans showered the Indians’ players and manager Ken Aspromonte with food and beer as they returned to their dugout.

Since the Rangers were due to play in Cleveland a mere six days later, reporters asked Rangers manager Billy Martin if he was concerned that the Indians’ faithful might respond in kind. Martin joked, “They don’t have enough fans there to worry about.”6 That was certainly true on an average night in Cleveland in 1974 as “85 percent of the seats at home games went unsold,” but June 4 would be different.7 In response to the Texas fans’ action and Martin’s insulting quip, Pete Franklin, host of Cleveland’s “Sportsline” program, “spent an entire week on the radio whipping Cleveland fans into a frenzy” against the Rangers.8 To that recipe for retaliation, the Indians’ top brass added 10-cent beer, which attracted 25,134 spectators.

The six-beer limit fell by the wayside early as demand exceeded supply at the concession stands and the decision was made to allow fans to have their cups filled directly from the beer trucks that were parked behind the outfield fences.9 A significant number of the fans quickly became inebriated, and their actions soon overshadowed those of the players on the field. This fact became evident after the Rangers’ Tom Grieve opened the scoring with a one-out solo home run off Fritz Peterson in the top of the second inning. As the next batter, Jim Fregosi, stood at the plate, a woman ran into the Indians’ on-deck circle, bared her breasts to the crowd, and then attempted to kiss crew chief Nestor Chylak, who was umpiring at third base.

The Rangers took a 2-0 lead in the top of the third on consecutive one-out doubles by Jim Sundberg and César Tovar, with the only disruptions being occasional firecrackers that were set off throughout the game. However, the fourth inning and the Rangers’ third run spurred on more fan nudity. Grieve belted his second homer and, as he rounded third base, a naked man ran onto the field and slid into second.

Although exhibitionism was becoming a theme, the only hostility the crowd had displayed through the first 3½ innings was to boo every Rangers player who came to bat. The first sign that the mood was turning ugly occurred in the bottom of the fourth inning when Leron Lee laced a liner back toward the mound that hit Texas starter Ferguson Jenkins in the stomach. As Jenkins lay on the ground in pain, Cleveland fans began to chant, “Hit him again, harder!”10 Jenkins remained in the game, but he gave up singles to the next two batters, Charlie Spikes and Oscar Gamble, that resulted in Lee scoring the Indians’ first run. Lee had made it to third on a close play on Spikes’ single, and Martin had come out to argue the call. The fans, emulating their peers in Arlington, pelted him with their beers as Martin, who was never one to back away from confrontation, “blew kisses into the stands.”11

Neither team scored in the fifth inning, but two men jumped the outfield wall, dropped their pants, and mooned both the crowd and the Rangers’ outfielders. Eventually, “the stadium people had [Indians radio] announcer Herb Score implore the fans not to run on the field,” but his pleas fell on deaf ears as fans continued to run across the outfield.12

In the sixth inning, Toby Harrah tripled to drive in Grieve, who had singled, and Fregosi, who had doubled, sending Grieve to third. This gave the Rangers a 5-1 lead. The Indians set about recouping those two tallies in the bottom of the frame. Brohamer led off with a double and scored when Lee was safe on first baseman Mike Hargrove’s fielding error; Lee advanced to second base as the run scored. Jenkins retired Spikes but then was accidentally spiked by Lee in a play at third base on a Gamble groundout. Jenkins’ injury forced him from the game, and Steve Foucault took the mound. George Hendrick singled against Foucault to bring Lee home and cut the margin to 5-3.

The next time Hendrick came to bat, in the bottom of the ninth, he started a game-tying rally with a one-out double off Foucault. Aspromonte sent three consecutive pinch-hitters to the plate — Ed Crosby, Rusty Torres, and Alan Ashby — and each registered a base hit, with Hendrick scoring on Crosby’s single. John Lowenstein lofted a sacrifice fly to center field that tied the game, and the Indians had the potential winning run on second base with two outs. At that point, it became obvious that many of the fans cared more about carousing than about the game.

Once more, two men ran onto the field, and one of them attempted to take right fielder Jeff Burroughs’ cap. Burroughs kicked at the man and stumbled to the ground. Martin thought that Burroughs had been knocked down, and he led the Rangers out of their dugout, bats in hand, to come to his player’s rescue. As the Rangers charged, so did hundreds of fans, and the melee was on. Aspromonte now led the Indians into the fray to help the Rangers fend off the beer-emboldened masses. As the situation worsened, Chylak declared the game a 9-0 forfeit to the Rangers.

The security force of 50 stadium officers and two off-duty Cleveland policemen was overwhelmed by the flow of fans and had to call for assistance; 20 additional patrol cars responded.13 In the meantime, players and fans alike were being pummeled. Cleveland pitcher Tom Hilgendorf suffered the worst injury of all the players when his head was cut by a metal folding chair that was thrown at him. Burroughs jammed a thumb, and Chylak also was hit by a chair and received a cut on one hand. Frank Ferrone, the chief of Cleveland Stadium security, said that 12 people were arrested and put the scale of the riot in perspective by asserting, “We would have needed 25,000 cops to handle this crowd.”14

Chylak was irate after the game, claiming, “They [fans] were uncontrolled beasts. I’ve never seen anything like it, except in a zoo.”15 Martin extolled the Indians’ actions, asserting, “I am very proud of the Cleveland players. They saved our lives.”16 He added, “Those fans just couldn’t control themselves after drinking that beer,” apparently unaware of the irony that such a statement would emanate from him.17

The game marked the first forfeit in the major leagues since September 30, 1971, when fans had stormed Robert F. Kennedy Stadium during the Senators’ last game in Washington, D.C., before they moved to Texas and became the Rangers; the New York Yankees had been the beneficiary in that game. Both the Rangers’ Harrah and the Indians’ Dick Bosman had been with the Senators at that game, and Bosman contrasted the events, saying, “The fans in Washington were not mean. ... They were only looking for mementos. This was a mean, ugly, frightening crowd.”18