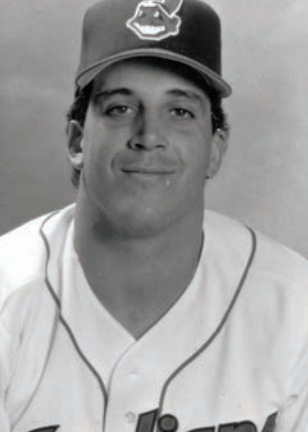 The Cleveland Indians were feeling pretty good about themselves. They had won six of their last seven games and were atop the American League’s Central Division, five games ahead of Kansas City. Among those six victories was a sweep over Chicago. The White Sox were thought to be the Indians’ biggest obstacle to a division crown in 1995. But at the moment, Chicago was 10 games off the pace.

Cleveland and Toronto split the first two games of the three-game set at Jacobs Field. Al Leiter shut out the Indians, 5-0. Dennis Martinez came back the next day to raise his record to 5-0, shutting out the Jays, 3-0.

Toeing the rubber for the visitors in the third game was David Cone, the reigning Cy Young Award winner in 1994. Pitching for his hometown team, the Royals, Cone posted a 16-5 record with a 2.94 ERA in the strike-shortened season. But on April 6, 1995, just after the strike was settled, Cone was dealt north to the Blue Jays. Moving Cone and his $5 million salary was not a surprise. The Royals were dumping high salaries; a day before trading Cone, they sent center fielder Brian McRae to the Chicago Cubs. The Cone deal was a lopsided one for sure, as it brought utilityman Chris Stynes and two players who never made it to the big leagues to K.C. The change in scenery did not deter Cone, who was 4-3 with a 3.12 ERA in the rather young season.

Cleveland countered with Jason Grimsley. Grimsley, who was from, of all places, Cleveland, Texas, was a spot starter who had bounced between the Indians and their affiliates over the last few years. Grimsley might be best known for deception, and not while he was on the mound. On July 15, 1994, White Sox manager Gene Lamont was tipped off that Indians slugger Albert Belle was using a corked bat. In the first inning, plate umpire Dave Phillips confiscated Belle’s bat and it was placed in Phillips’ locker in the umpires’ dressing room. Since all of Belle’s bats had cork in them, Grimsley grabbed a Paul Sorrento model, doctored it some and crawled his way above the ceiling tile from the Indians’ clubhouse to the umpires’ room. Grimsley crawled around the cinder block, through a maze of air-conditioning units, and wires using a flashlight to make the switch. It took him over an hour and a half and 5½ innings to make the round trip. The break-in and the heist were immediately detected by the White Sox officials. Eventually, the Indians handed Belle’s bat over to the umpires. Belle’s bat was taken, x-rayed, cut open, and cork was found. Belle was suspended seven games for his actions. Grimsley was not fined or suspended, and it was five years before his caper came to light.

Toronto, which had won back-to-back world championships in 1992 and 1993, was indeed a formidable outfit. The 41,688 folks who crammed into Jacobs Field that day were believers from the get-go. Grimsley walked the first three Blue Jays he faced in the first inning and Toronto sent 11 men to the plate, scoring seven runs. Former Indian Joe Carter drove in a pair and Shawn Green followed with a three-run round-tripper. Grimsley lasted a mere third of an inning as the Jays kicked sand in the Indians’ faces. “If I had gone around and taken a poll with Cone on the mound for the Blue Jays, I would’ve said the game was over,” said Tribe skipper Mike Hargrove.1

Chad Ogea relieved Grimsley. The teams each scored a run in the third inning, and Toronto led 8-1. The tally by the Jays was the only blemish on Ogea’s stat line for the afternoon.

The Tribe started to mount a comeback in the fourth and fifth innings. Kenny Lofton singled home two runs in the fourth, while Eddie Murray hit a two-run homer, his seventh of the season, in the fifth.

Belle singled home another run in the sixth, and with the score 8-6, Cone was done for the day. He was relieved by Tony Castillo, who shut the Tribe down over the next 2⅔ innings. “I just couldn’t stop the bleeding,” said Cone. “There were a couple of turning points to the game. Lofton’s two-out hit and Murray’s two-run homer got them back in the game. I couldn’t really negotiate my split-finger, and I threw a lot in the dirt. … It’s a shame to waste that lead.”2

Toronto’s 8-6 lead held until the bottom of the ninth, when Carlos Baerga led off for Cleveland. He was thrown out on a bunt attempt by Castillo. Jays skipper Cito Gaston then summoned right-hander Darren Hall into the game. Hall had led the Blue Jays in saves with 17 in 1994, and he was expected to pick up where Castillo had left off. It was not to be.

Belle singled and took third base on Murray’s hit to right field. Alvaro Espinoza ran for Murray, but was erased on a fielder’s choice, Belle scoring on the grounder by Jim Thome. On a first-pitch fastball by Hall, Paul Sorrento smacked a home run to right field, the baseball landing several rows deep. The Indians dugout emptied out on to the field in celebration. It was Sorrento’s 12th home run of the season and capped the comeback by the Tribe, their seventh such victory so far in the season. “Someday, the comebacks are going to stop,” said Hargrove. “But this has been going on for a year and a half.”3

Sorrento was the hero of the hour, but it was Ogea holding the Blue Jays at bay for 6⅔ innings that allowed the Indians to creep back into the game. He was followed by Julian Tavarez, who pitched two innings of one-hit ball to claim the win. “When I first hit it, I thought it was way out,” said Sorrento. “But the wind kind of swirls. It’s kind of weird. I looked out, and I had to start running a bit.”4

The win catapulted the Indians to win their next five games, and nine of their next ten. They were on their way.