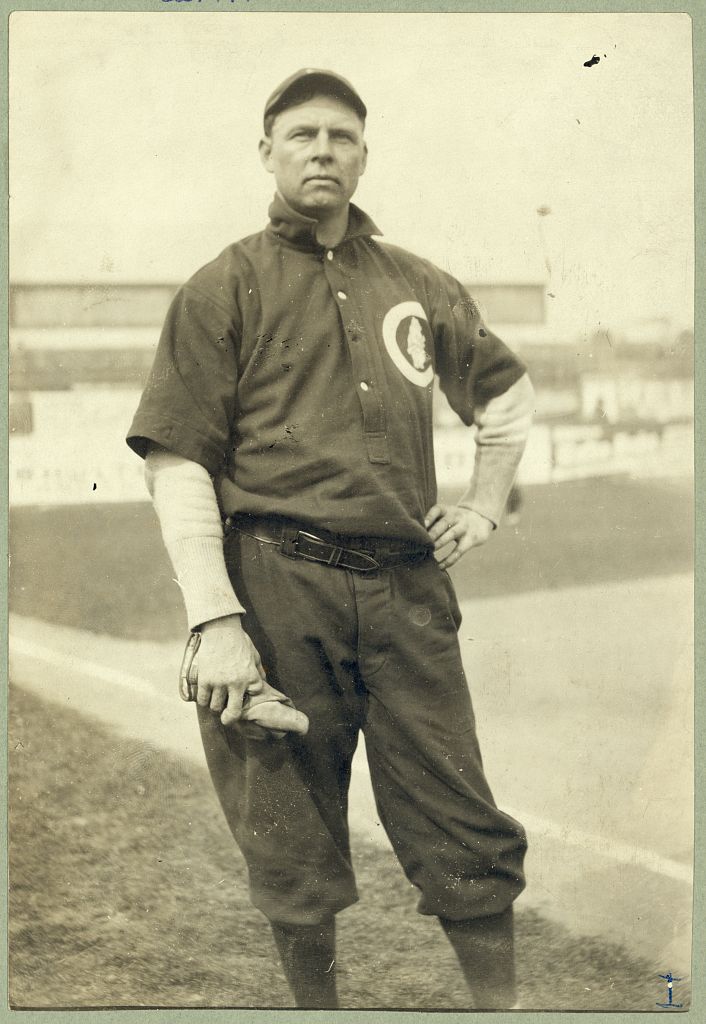 The New York Giants and Chicago Cubs were “red-hot rivals for National League supremacy.”1 The Giants won the NL pennant in 1904 and 1905, but in 1906 they finished in second place behind the pennant-winning Cubs. Now, through games of June 4, 1907, the teams were neck-and-neck in the standings, the Cubs in first place with a 31-9 record and the Giants 2½ games back at 28-11.

The Giants arrived in Chicago for a much-anticipated series with the Cubs at the West Side Grounds. In the first game, on Wednesday, June 5, 1907, the teams’ aces would duel: right-handers Christy Mathewson for the Giants and Mordecai Brown for the Cubs. Mathewson won 30 or more games each season from 1903 to 1905. Brown, nicknamed “Three Finger” for his deformed right hand, won 26 games in 1906 with a microscopic 1.04 ERA.

“The local rooters … mobbed the gates of West Side Park … in their anxiety to get inside to reach points of vantage.”2 When the teams began their preliminary practice “the field was encased with wave after wave of howling, yowling fans.”3 The attendance was reported to be 22,000 in a ballpark with a seating capacity of 16,000.4 Thousands stood along the perimeter of the field. Nonetheless, “[G]ood order was maintained, aside from a few lemons tossed” at John McGraw, the Giants manager.5

Before the game, 19 yellow balloons were released into the air, in honor of the Cubs’ 19-0 drubbing of the Giants a year ago, and a kite was flown carrying an effigy of McGraw “to the immense gratification of the fans.”6 Meanwhile, devoted Giants fans gathered at the Manhattan Theatre in New York to follow the game on an electric scoreboard.7

The Cubs fans razzed Giants catcher Roger Bresnahan about his “shin guards.” The contrivances looked strange, but he predicted that the day would come “when all catchers will use shin guards, and they will be as much a part of the catcher’s outfit as his mask and his chest protector.”8 Cubs catcher Johnny Kling admitted that he, too, would wear them if he could get up the nerve.9

The Giants scored twice in the top of the first inning. Spike Shannon led off by drawing a walk. George Browne rapped a single into center field; Shannon reached third base on the hit while the speedy Browne went to second base on the throw to third. Art Devlin bounded a ball over the head of Cubs third baseman Harry Steinfeldt to bring home Shannon and Browne.

The Cubs got one run back in the bottom of the first. Leadoff man Jimmy Slagle singled to left field, moved to second base on Joe Tinker’s sacrifice bunt, and scored on Jimmy Sheckard’s single to center field.

Devlin seemed to have no trouble with Brown’s offerings. He smacked a double to left-center with one out in the third inning. Cy Seymour grounded the ball up the middle, but shortstop Tinker raced over to get it and threw to first base in time to get him. If the ball had got past Tinker, Devlin would have scored; instead Devlin remained perched on third base as Bresnahan drew a walk and Dan McGann was hit by a pitch to load the bases. Brown breathed a sigh of relief when Slagle caught Bill Dahlen’s “scorching drive” in center field to end the threat.10

The Cubs tied the score in the bottom of the fifth. Kling led off with a single to left field, and Brown, attempting to sacrifice, placed a perfect bunt along the third-base line and beat it out for an infield hit. Mathewson fanned Slagle, but Tinker’s single into center field loaded the bases. Sheckard flied out to George Browne in right field, deep enough to allow Kling to tag up and score.

In the bottom of the sixth, Steinfeldt singled to center field, advanced to second base on Solly Hofman’s sacrifice bunt, and reached third on an infield single by Johnny Evers. The hit by Evers bounced over Mathewson’s head; “the big pitcher twisted his ankle going after it, but was able to continue after a few minutes’ rest.”11  Kling’s grounder was captured by shortstop Dahlen, who threw home. Steinfeldt slid into Bresnahan’s shin guards (or “top boots,” as the Chicago Tribune called them) and was declared out.12  Without this protection, Bresnahan might have been spiked.

The Cubs broke the game open in the seventh. With one out, Tinker singled to left field and Sheckard reached on a bunt single. Frank Chance, the Cubs manager and first baseman, drove the ball into the standing-room crowd in right field for a ground-rule double, scoring Tinker. Steinfeldt followed with a single to left field, scoring Sheckard and Chance, and came home on Kling’s ground-rule double into the left-field crowd. The Cubs now led 6-2. Perhaps Mathewson’s ankle was troubling him; in this inning, he was merely “the ghost of the once great twirler.”13

Chicago’s defense kept Brown out of trouble. Devlin led off the top of the eighth with a hot shot to third base, but Steinfeldt made “an extraordinary stop” and threw him out.14  Seymour sent a long fly into the crowd in left field and deserved a ground-rule double, but the fans got out of the way so that Sheckard could make the catch. It was a home-field advantage — they would not help a Giants outfielder.

The Cubs added two more runs in the eighth inning. Tinker drew a walk, Sheckard hit a ground-rule double into the right-field crowd, and both men scored when Chance’s “easy grounder” trickled through the legs of second baseman Tommy Corcoran.15

The Giants got singles in the bottom of the ninth from McGann and Corcoran, but failed to score. The final tally was Cubs 8, Giants 2.

The Cubs won the next two games of the series and widened their lead over the Giants to 5½ games. The Cubs went on to win 107 games, the 1907 NL pennant, and the World Series. The Giants finished in fourth place, 25½ games back.