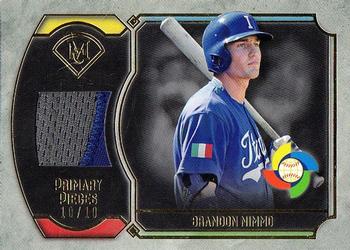 Excitement was building for the Mexican hosts of the 2017 World Baseball Classic, the fourth iteration of the 16-team, two-round international baseball tournament. The WBC is sanctioned by the World Baseball Softball Confederation and is operated as a joint venture between Major League Baseball and its Players Association.

Mexico had reached Round Two in the first two WBCs, held in 2006 and 2009, but was eliminated in Round One in 2013. Italy scored two runs in the top of the ninth to beat Mexico in the opening game in 2013; Mexico recovered to beat the United States, but lost to Canada, and was eliminated from the tournament.

As a result, Mexico had to play in a qualifying tournament in 2016. Wins over the Czech Republic and Nicaragua earned a spot in the 2017 WBC and, along with a 2016 Caribbean Series championship, fired up the national fan base.

The first game of the 2017 WBC in Pool D was a rematch between Mexico and Italy. In the 2006 and 2009 WBCs, Italy had been easily eliminated, so it was a surprise to many that it defeated both Mexico and Canada and moved on to Round Two in 2013, where it lost to eventual champion Dominican Republic and runner-up Puerto Rico.

Preparations were underway at Estadio de Béisbol Charros de Jalisco in Zapopan, in the state of Jalisco, Mexico. Estadio Béisbol Charros de Jalisco was built in 2011 for the Pan-American games. This was the first time the WBC was held there. For the 2017 Classic, the capacity was increased to 16,000, and new artificial turf was installed on the field and warning track. Every surface of the ballpark was given a fresh coat of paint, including the perimeter grassy areas.

While the Mexican national anthem (the last to be performed) was played, the young woman holding the Venezuelan flag fainted. The Venezuelan color guard saved the flag while the Mexican players tried to break her fall. Medical personnel and a cart came onto the field as the anthem continued. When the anthem ended, the players from Italy and Mexico came together for handshakes, carefully avoiding the woman who was being helped up onto the cart.

The aficionados (fans) from Mexico were excited for a rematch with Italy. Adrian Gonzalez, who entered 2017 with 308 career home runs in 13 major-league seasons and four consecutive postseason appearances with the Los Angeles Dodgers, was the biggest name on Mexico’s team. Like his brother and team manager Edgar Gonzalez, Adrian was born in California.1 Players from Mexico on the squad included Yovani Gallardo, Roberto Osuna, Oliver Perez, Sergio Romo, and Joakim Soria, in addition to coach Fernando Valenzuela.

Italy had established itself as one of the top European teams in international play and was led by Marco Mazzieri, a longtime manager of Italy’s national teams. Its standing made it the home team.2 The WBC squad was bolstered by a number of major leaguers of Italian descent including Drew Butera (son of Italy coach Sal Butera), Francisco Cervelli, Brandon Nimmo, Daniel Descalso, and Gavin Cecchini. Former Seattle outfielder Alex Liddi was one of the players who was born and raised in Italy, as was Alessandro Maestri, the team’s starter in the first game.

Esteban Quiroz homered to left off Maestri on a 3-and-1 pitch to start the game, which brought the Mexican aficionados to their feet. Many were dancing el terremoto (the earthquake) in the aisles, a dance that requires one’s entire body to shake. Between the music, shouting, clapping, frenzied dancing, and fireworks, one could easily believe there was an earthquake.

In the bottom of the first, John Andreoli tied the score with a homer off Gallardo and quieted the fans, but not by much.

Sabastian Elizalde reached on a throwing error by shortstop Cecchini to start the third. Elizalde scored on a one-out double by Quiroz, who was thrown out trying to stretch his hit into a triple.

Tiago Da Silva relieved Maestri with one out in the top of the fourth, and Japhet Amador, Mexico’s designated hitter listed at 6-foot-4 and 300 pounds, greeted him with a line-drive homer to left. Da Silva gave up a single to Efren Navarro, hit Luis Cruz with a pitch, and then allowed a run-scoring single by Elizade, which put Mexico ahead 4-1.

In the bottom of the inning Rob Segedin hit a two-run homer to right. One out later, Chris Colabello homered to right and the game was tied, 4-4.

Switch-pitching Pat Venditte relieved for Italy in the fifth. His request to have his pitch limit separated for left- and right-handed throws had been turned down.3 3 Venditte faced eight batters, pitching left-handed to left-handed hitters Quiroz, Alex Verdugo, Gonzalez, Navarro, and Elizade and right-handed to right-handed hitters Laird, Amador, and Cruz. He hit Quiroz with a pitch, allowed singles to Verdugo – a 20-year-old Dodgers farmhand who entered 2017 as Baseball America’s 58th-ranked prospect in baseball – and Amador, walked Navarro with the bases loaded, and gave up a two-run double to Cruz. The onslaught broke the tie and left Mexico leading, 7-4.

Fernando Salas took over for Gallardo, the Mexico starter, in the fifth and got two strikes on Butera, who lined the next pitch to left for a home run. Cecchini hit a ground-rule double to left-center. Vidal Nuno took over for Salas and got out of the inning with Mexico still up by two runs at 7-5.

With a two-out, two-run single by Elizalde in the seventh, Mexico increased its lead to 9-5.

Leading off the ninth against Osuna (one of the majors’ top closers), Cervelli hit a grounder to left-center and legged it to second when the Mexican outfield was slow in fielding the ball. Colabello doubled off the fence in left-center. Sebastian Pomo, running for Cervelli, held up to make sure the ball was not caught and stopped at third.

Liddi grounded a double inside the third-base line, scoring two. The score was 9-7 with no outs.

Butera hit a grounder to the right of Cruz at shortstop. Liddi, on second, broke for third. Cruz, possibly thinking about throwing out Liddi, booted the ball for an error, allowing the tying run to reach first.

Andrew “Drew” Maggi walked, and the bases were loaded for Nimmo. Southpaw Oliver Perez, heading for his 15th major-league season and pitching in his fourth WBC, came in to face the lefty. Nimmo – who had made his major-league debut with the New York Mets in 2016 – hit a drive to right-center. For a moment it appeared that a lunging Verdugo had caught the ball, but he could not hold on. Liddi scored to cut the lead to one run; the bases remained loaded.

Andreoli hit a grounder toward the hole in right. Second baseman Luis Urias, playing in, dived for the ball, only to have it bounce off his glove and roll into right. Urías raced after the ball and threw home, but it was too late to get Maggi as two runs scored on the play to end the game with Italy winning, 10-9. Triple-A reliever Jordan Romano pitched a scoreless ninth inning to earn the win.

Mexico had requalified for the WBC but lost again to Italy. For their second games in Pool D, Mexico played Puerto Rico, and Italy faced Venezuela.

For security reasons, the main press box was used for government officials and dignitaries. This resulted in the official scorer – or anotador ofícial – sitting in the control booth on the first-base side, with the personnel who controlled the scoreboard and music, while the rest of the press were up a level. This created a challenge as there were no direct communication wires from the official scorer to the throng of reporters covering the event.

The fix was to have an assistant to the official scorer sitting with the press, equipped with a radio, microphone, and local speaker. The official scorer made the hit or error call and relayed this information to the assistant, who then made the announcement to the press in English and Spanish. The author handled press box announcing in English and Spanish after getting the information from the anotador oficial, who is also her husband.

When, for example, Sabastian Elizalde reached on Gavin Cecchini’s throwing error in the third, “Error six,” said the official scorer into his radio. “Error seis,” said the assistant in Spanish, but this could barely be heard over the noise of the fans.

The information in this article primarily came from the author’s scorebook and memories from her role as press-box announcer, as well as notes and the scoresheet from the official scorer, the author’s husband, SABR member Stew Thornley. Some of the information came from the 2017 World Baseball Classic media guide. The author also consulted Baseball-Reference.com and Retrosheet.org for relevant information.

1 The tournament features the best players from around the world competing for their home countries and territories. Players are qualified if they previously appeared on the final roster of a Federation Team, if the player is a citizen of or is eligible for a passport from the team’s country or territory, if the player is a current resident of or has one parent who was born in that country or territory.

2 The Pools in Rounds One and Two are designated by letters. In the 2017 WBC Pool A was in Seoul, Pool B was in Tokyo, Pool C was in Miami, and Pool D was in Jalisco. Teams are assigned to Pools based on their current world standings as determined by the WBSC. These standings also determined who would be the home team, which is why Italy was the home team in this game.