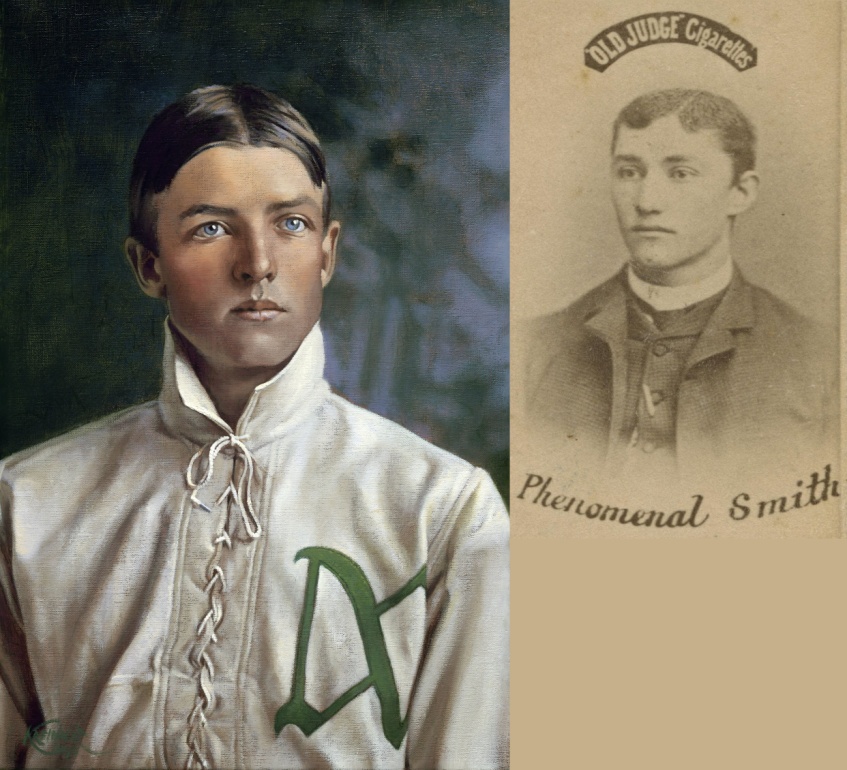 Early in his career, John Francis Smith was a pitcher of great promise. As a 20-year-old in 1885, the southpaw struck out 147 batters in 11 games for the Newark team of the Eastern League, and he became known as Phenomenal Smith.1 A clever hurler who mastered a variety of deceptive curveballs,2 he pitched for several major-league teams, going 54-74 with a 3.89 ERA in 140 games, before his arm gave out in 1891.3

The end of Smith’s pitching career was the beginning of his second career, as a minor-league outfielder and manager. He was a superb hitter. His .405 batting average in 1896 was second only to Nap Lajoie’s .429 mark in the New England League; and three years later, at age 34, Smith led that league with a .382 average.

Smith was then hired as playing manager of the 1900 Norfolk team of the newly formed Virginia League, and his team was nicknamed the Phenoms. He brought with him a half-dozen players from the Portland (Maine) Phenoms, the team he had played for and managed in 1899.

Also recruited by Smith was a 19-year-old pitcher named Christy Mathewson, who had posted a dismal 2-13 record for the 1899 Taunton, Massachusetts, team, between seasons as a football star at Bucknell University. On August 23 of that year, Smith’s Portland squad had pounded Mathewson’s deliveries for 24 hits and 35 total bases in a 19-11 victory over Taunton.4 Yet Smith saw potential in Mathewson, a tall, hard-throwing right-hander who might thrive under his tutelage.

Norfolk’s twin city, Portsmouth, also joined the Virginia League in 1900, fielding a team called the Boers, named for South Africans who were at the time fighting the British. Both the Norfolk Phenoms and Portsmouth Boers used League Park in Norfolk as their home ballpark.

They began the 1900 season by playing each other in a six-game series at that venue, alternating as the home team. In the opener, the Phenoms were designated as the home team and Norfolk Mayor C. Brooks Johnston participated in the pregame ceremony. The next day the Boers were the home team and Portsmouth Mayor J. Thompson Baird was featured.

Enthusiastic fans turned out to see these teams. Attendance was estimated to be between 3,500 and 4,000 for the first game of the series5 and 2,500 for the second contest.6

Young Mathewson pitched the final three innings of the opener on April 30, in the Phenoms’ 10-9 triumph.7 Smith tabbed him to start the second game, on Tuesday, May 1, and Portsmouth manager Pete Weckbecker chose John Leonard to pitch for the Boers.

Portsmouth batted first and Mathewson nervously walked the first three Boers without throwing a strike. Billie Kemmer followed with a triple to center field. The next batter made the first out, and then Win Clark singled to drive in Kemmer. After another out, Charlie Luskey tripled, and just like that, Portsmouth had put five runs across. Years later, Mathewson recalled the moment:

“The Norfolk fans were yelling to Smith to take me out, and I, of course, thought he would, but that is just what he did not do. Instead of chasing me to the bench, he put his hand on my shoulder and said, ‘Christy, you have got the stuff, but you are a little nervous. You are going to get over that in an inning or so, and I am going to leave you in till the finish if Portsmouth gets a hundred runs.”8

Mathewson settled down after Smith’s reassurance and did not allow another run in the game.

The Phenoms scored three more runs in the second inning, tying the game, 5-5. The exact manner was not explained in the newspaper account of the game, but it was reported that Mathewson contributed a single to the rally.10

Norfolk took the lead in the sixth inning when Jim Smith tripled with two men on base. One of those men was Mathewson, who had reached on an error by Clark, the second baseman.

Held scoreless since the first inning, the Boers threatened in the seventh. Will Kohnle led off by drawing a walk from Mathewson, and Harry Longley smacked a single to left field. But Mathewson escaped the jam impressively by fanning the next three batters.11

There was no further scoring in the game. The final tally was Norfolk 7, Portsmouth 5.

Three days later, Mathewson again defeated Portsmouth, and the Norfolk Virginian-Pilot declared that he “is certainly a comer.”13 Indeed he was – a phenom among the Phenoms.

By July, Mathewson had already compiled a 20-2 record for Norfolk, drawing interest from major-league teams. He was sold to the New York Giants and made his major-league debut on July 17, 1900. He went on to win 373 major-league games in his Hall of Fame career.

“I believe I owe my success as a baseball pitcher to Phenomenal John Smith,” said Mathewson in 1911. By leaving Mathewson in the game in his first start for Norfolk, after he had allowed five runs in the first inning, Smith instilled confidence in him. “Had he taken me out,” said Mathewson, “I believe I never would have amounted to anything as a pitcher, for without confidence a pitcher does not amount to much.”14

Even after losing Mathewson’s services just 2½ months into the season, John Smith’s Norfolk Phenoms finished 1900 with the best record in the Virginia League. For the next three years, Smith was playing manager of the Manchester, New Hampshire, team of the New England League. In 1902 he led Manchester to the pennant, and he led the circuit with a .369 batting average.

Game coverage in the May 2, 1900, issue of the Norfolk Virginian-Pilot.