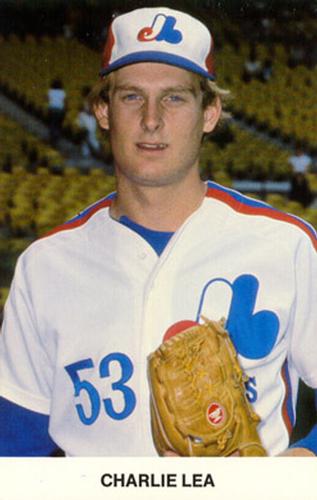 Montreal’s 24-year-old right-hander Charlie Lea was an unlikely candidate to toss the first no-hitter in the history of Olympic Stadium. Pounded in his first two starts in 1981 (nine runs in 6⅔ innings), Lea held the San Francisco Giants hitless on Mother’s Day. “I’m not the type of person who jumps up and down,” he said. “Everything fell into place. We had an excellent defense. It was a team effort.”1 Lea’s dominance was not lost on his batterymate, Gary Carter. “No one would have thought he’d do it,” said the NL’s best backstop. “He was getting his fastball over and he had command of all his stuff. He was just super.”2

On Sunday, May 10, the Expos arrived at Stade Olympique to conclude an 11-game homestand with a doubleheader. Skipper Dick Williams’s bunch had an impressive record (16-9) and was one game off the lead in the NL East; however, they had lost five of their previous eight games and had fallen out of first place. Manager Frank Robinson’s Giants were in fourth place in the NL West (14-16), six games off the pace, and had taken the first two games of the series.

A good crowd of 25,343 turned out for an afternoon of baseball, but had little to cheer about in the first game. Tom Griffin fired a four-hitter, and Enos Cabell and Darrell Evans belted home runs to lead the Giants to a 5-1 victory.

Given a spot start in the second game, the 6-foot-4, 200-pound Lea surprised everyone. One year earlier, Lea was burning up the Double-A Southern League, winning all nine of his starts for the Memphis Chicks. After two starts in Triple-A, he was summoned to the parent club in June during a heated, season-long pennant race. “He came in and pitched like hell when we needed him last year,” said pitching coach Galen Cisco of the rookie who went 7-5 with a 3.72 ERA in 104 innings.3 Despite Lea’s potential, Expos beat writer Ian MacDonald thought he’d be in Triple-A to start the 1981 season in light of the club’s signing of free agent Ray Burris. “Some of the people thought I was getting on Lea too heavily last year,” said Williams, whose hard-driving reputation was well-known. “I know he has the potential to be a big winner.”4 Given his 7.36 ERA in 11 innings thus far in 1981, Lea recognized that he was pitching to keep his spot on the team.

A popular player during his six-year tenure with the Expos, Lea was born in France to American parents stationed in the military. The family moved back stateside when he was three months old, and Charlie grew up in Memphis, Tennessee. He spoke with a pleasant Southern drawl, and made it known, “I don’t talk any French,” much to the dismay of the French-speaking Québécois.5 “I’m a Southern guy and yes, it was a different culture for me,” he said in retirement. “There were some different things there and French was the preferred language. But I never had any trouble communicating with anybody and everybody worked hard to make it a nice place to be and I enjoyed every bit of my time there.”6

On a cool, cloudy afternoon with the threat of rain looming, the second game shaped up as a classic pitchers’ duel. Lea faced the minimum number of batters through seven innings; he yielded only a leadoff walk to center fielder Bill North in the fourth, but the speedster was promptly thrown out by Carter in a steal attempt. The Giants’ 26-year-old righty Ed Whitson, an All-Star the previous season, held the Expos scoreless through six innings. The Expos loaded the bases with two outs in the second inning on a single, a hit batter, and a walk, but Whitson escaped the jam by inducing 21-year-old leadoff hitter Tim Raines, who entered the game batting .356, to hit a grounder and force out Darrell Evans at third base to end the inning.

The Expos scored all four of their runs in the seventh inning. Third baseman Tim Wallach clubbed Whitson’s first pitch for a home run. With right fielder Rowland Office on second via a single and Raines on first courtesy of an intentional walk, second baseman Rodney Scott smashed a two-out double driving in both of them. Andre Dawson followed with a run-scoring double to make it 4-0.

The Expos’ offensive outburst re-energized the crowd, which, according to the Montreal Gazette, had thinned out to about 8,000 with the “temperatures dropp[ing] markedly.”7 Shunning superstition, Lea talked about his no-no with teammates. “I knew it, and everybody in the ballpark knew, so there was no need to keep quiet.”8 Ian MacDonald reported that fans “cheer[ed] every pitch Lea fired from the eighth inning until the end” of the game.9

When Lea walked Darrell Evans and Larry Herndon to start the eighth inning, relievers Woodie Fryman and Elias Sosa began warming up. Lea got a big boost when second baseman Scott fielded catcher Milt May’s one-hop grounder to initiate a double play. “If that ball May hit is five feet right or left, it’s a hit,” said Lea after the game.10 Lea issued his third walk of the frame, to Dave Bergman, before Billy Smith flied out. “He was pumped up,” said Carter about Lea’s wildness in the inning.11 “I was tired because that’s the longest I’ve gone this year,” explained Lea honestly. “If they got a hit, then (Williams) would take me out.”12 Dick Williams looked at the situation in context. “There’s a natural letdown,” he said. “We were watching him closely. He regained control. Besides if we hadn’t scored those runs, maybe he wouldn’t have walked anyone.”13

Lea, who became known as an excellent curveball pitcher, relied on his heater with a four-run lead in the final two innings. “I was just laying the ball across the plate,” he said.14 After pinch-hitter Jim Wohlford grounded out for the first out in the ninth, Lea showed some signs of nervousness. He bounced the ball on the pitching mound, drawing the ire of Giants manager Robinson, who asked third-base umpire Ed Runge to check the ball. With a 3-and-0 count on North, Lea tossed “three straight strikes,” including a hotly-contested called third strike, for the second out. First baseman Enos Cabell hit a “soft fly ball to short center” to end the game.15 As Dawson caught the ball, teammates mobbed Lea on the mound. The New York Times reported that Robinson continued his argument with Runge after the game. “I felt the umpire should have taken the scuffed ball out of the game,” said Robinson. “But Runge told me that bouncing the ball on the turf is the same as batting the ball on the turf.”16

“(Lea) had some smoke in the ninth and he came through in tight situations,” said an ebullient Williams after the game. Lea whiffed a then-career-high eight to pick up his first win of the season. “I’ve had a lot of confidence in him,” said Cisco. “He has the arm and the know-how.”17 Lea’s no-hitter was the third in franchise history; Bill Stoneman tossed the other two, in 1969 (in Philadelphia) and in 1972 (in Montreal).

“We needed this,” said Lea. “I just want to sit back and let this sink in for a while.”18 In his first big-league complete game in his 22nd start since the beginning of 1980, Lea did not yield any hard-hit balls and was quick to credit his catcher for his success. “I didn’t have to shake off Gary once,” he said.19 His teammates seemed genuinely excited for his accomplishment, and gave him a “makeshift royal treatment” in the clubhouse by laying towels on the floor and lining up cans of beer beside his stool and locker instead of bottles of champagne.20

Notwithstanding his no-hitter, Lea was unsure when his next start would be. “I have no idea if this will get me back in the rotation,” he said matter-of-factly. “Maybe they’ll want me for long relief.”21 But Lea’s wait was short. Six days later, he tossed a four-hitter to blank the Giants at Candlestick Park as part of a career-high streak of 29⅓ consecutive scoreless innings. He was named NL pitcher of the month in May, during which he won four consecutive starts and yielded just one earned run in 35⅓ innings.

Lea’s once promising career was derailed by back and shoulder problems. After winning 43 games over a three-year stretch (1982-1984) and averaging more than 200 innings per season over that period, Lea missed the 1985 and 1986 seasons. He had an abbreviated comeback in the American League with Minnesota, and retired at the age of 31 in 1988.