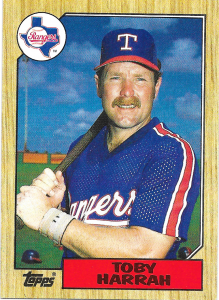 Two teams that were flying high ran into each other, and one got run over. As always, the complete randomness of the blowout was unpredictable.

The Texas Rangers had swept a doubleheader from the New York Yankees on Sunday for the first time ever. The two wins pushed them into a tie for first place in the American League West with a 15-13 record (ahead of the California Angels on percentage points). Meanwhile, the Cleveland Indians had come off a 10-game winning streak to lose three in a row at home to the Chicago White Sox and fall to third in the AL East with a 17-11 record.

The Rangers started their regular lineup, with the exception of first base, where Tom Paciorek was brought in to give Pete O’Brien a rest. The lineup was hitting well, especially DH Larry Parrish, who had hit three home runs in the three games against the Yankees. On the mound for the Rangers was Charlie Hough, making his second start of the season after suffering a broken finger in spring training. Hough had begun to earn a reputation as an Indians-killer, having beaten them in his last six starts.

The Indians began with their regular lineup and started Neal Heaton. Heaton, 1-1 with a 3.41 ERA, had thrown a complete game in his last start for his first win of the season. Despite being swept by the White Sox, the Indians had been competitive, losing two of the games by one run and the third in the 11th inning on an error, a wild pitch, and a two-run single off reliever Jim Kern, making his first appearance in 10 days after a pulled groin muscle injury.

The Monday night crowd of 9,354 saw things start slowly. In the top of the first the Rangers got two men on base, but both were thrown out by Indians catcher Andy Allanson at second. In the bottom half, the Indians took the lead when Brett Butler doubled and later scored.

Controversy erupted in the top of the third inning after a dubious call. With runners on first and second and one out, Scott Fletcher grounded to third. The Indians attempted to turn a double play, but umpire Drew Coble said that second baseman Tony Bernazard was off the bag, so they got only the out at first. After first baseman Pat Tabler had caught the ball, he flipped it to first-base umpire Mike Reilly, thinking it was the third out. Paciorek, running from second, went home to score while Reilly held the ball. The umpires huddled and decided that time was out and sent Paciorek back to third. Rangers manager Bobby Valentine argued that the rules said play should not have stopped just because the umpire had touched the ball. He played the rest of the game under protest, which was dropped when the Rangers won.

In the fourth the Rangers tied the game when Paciorek singled home Gary Ward, but it took until the sixth for things to explode. Pete Incaviglia singled, Ward walked, and then Parrish drove a home run to deep left. “It seemed like everything we did after that was right,” Parrish said about his home run.1 When the next batter singled, Indians manager Pat Corrales had had enough, removing Heaton for Kern. “I got them out for a while, but it ended up not mattering, because we got crushed,” said Heaton.2

Kern gave up four hits and a walk in the inning, and by the time a double play ended it, the Rangers had added five more runs for a 9-1 lead. “All of a sudden, we started finding holes, and we got on a roll,” Paciorek said.3 The Indians got one back, but the Rangers lit up Kern again in the top of the seventh. By the time he was pulled he had given up three more runs and got just one out.

Kern allowed eight runs (seven earned) in 1⅓ innings. As he left the field the mood was ugly, and someone threw a glass bottle that landed on the ground near him. Kern and other players and coaches stared into the crowd for a while, but soon went back into the dugout.4 “It got so bad that they told the guys sitting on our dugout steps to get back inside. They were afraid the people would throw things at them,” Butler said.5 “I really didn’t see it,” Corrales said. “I can understand the fans getting mad, but it shouldn’t get to the point where somebody wants to do Jim bodily harm. Hell, I was mad at him.”6 Kern was unapologetic. “There’s not much to say,” he said. “I’m out there working my rear end off, and everything they hit drops in. It’s not like I was slopping it up there.”7

The Rangers replaced Hough with the game well in hand, bringing in Mickey Mahler to get the three-inning save. On the other side, reliever Jamie Easterly didn’t do any better than Kern as he was left in to take his lumps and finish the game. “It didn’t matter who we sent out there,” Corrales said. “They were swinging their bats aggressively and were going to score some runs.”8 In the eighth the Rangers added four runs on four hits, and they plated two more in the ninth to run the final score to 19-2.

Happy with the score, the Rangers talked about the future. “Right now we’re swinging the bat real well,” Incaviglia said. “It’s a good feeling to see guys up and down the lineup hitting the ball. But we’ve got to forget this one now and think about winning tomorrow.”10 “It’s a long season,” said Hough. “If we can sustain the intensity, I don’t know if we can win it, but I think we’re going to be all right.”11

The Rangers also felt sorry for the Indians, knowing this was just a fluke score. “I know both of those pitchers well,” said Parrish. “When you’re scoring the 15th, 16th, and 17th runs, you start feeling sorry for them.”12

The Indians’ team ERA jumped from 3.29 (second in AL) to 3.81 (fourth). “We played ’em head-to-head for five innings, and then they kicked the (solid waste) out of us,” Corrales said.13 He also wasn’t too worried about his pitching staff. “They’ll be back,” Corrales said. “The bullpen’s been having a rough time, but we haven’t been swinging the bat, either.”14

Issues with fans were front of mind for the Indians. Apart from the bottle incident with Kern, a fan threw a foul ball back in the ninth, several fans threw oranges on the field, and there was ongoing booing and ironic cheers when the Indians got outs. Butler was mad after the game and ripped into the fans. “Obviously, our fans are front-runners. I thought we had a new beginning here. I thought we had a love affair going, but it’s obvious we don’t,” he said. “They’re not behind us. When we need them most, they’re not there. I’ll never forget this night. Never.”15 Referring to the recent performances, he continued to complain. “I know we lost four in a row, but did they forget we also won 10 in a row? Do they know how many other teams would love to be 17-12 right now?” he said.16

Meanwhile, Corrales ended the night philosophically. “Everybody has a nightmare like this once in a while,” he said. “It didn’t matter who pitched. Texas would’ve blasted Cy Young tonight.”17