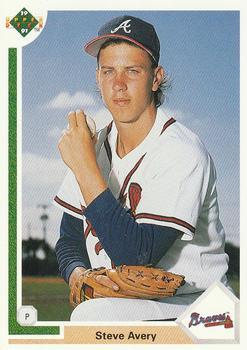 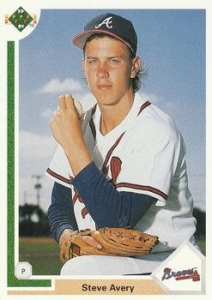 Propelled by rising youngsters and veteran newcomers, the Atlanta Braves emerged from six seasons of woebegone play to challenge for the National League West lead in May 1991. Left-hander Steve Avery, the vanguard of Atlanta’s youth wave at age 21, continued his early-season breakthrough in a 6-1 victory over the Pittsburgh Pirates on May 12 at Three Rivers Stadium, keeping the Braves in first place and foreshadowing his dominance in Atlanta’s National League Championship Series win over Pittsburgh that October.

The Braves selected Steven Thomas Avery, a Detroit-area high schooler and son of a former minor-league pitcher, third overall in baseball’s June 1988 draft.1 Atlanta’s draft position reflected its third straight season with 72 wins or fewer; the Braves were headed to an NL-worst 54-106 mark in 1988.2

Atlanta’s big-league struggles, broadcast nightly into America’s living rooms via owner Ted Turner’s superstation WTBS, continued through 1989 and 1990, while Avery rocketed through the farm system.3 He reached the majors in June 1990, two months after his 20th birthday.4

Avery remained in the Braves’ rotation for the rest of the 1990 season and finished with a 3-11 record and a 5.64 ERA. His top-prospect potential materialized in a handful of outings, including a shutout of young righty Greg Maddux and the Chicago Cubs in August.5

The Braves had a 65-97 record in 1990, their third season in a row in the NL’s cellar and sixth with a winning percentage below .450, but signs of better days were perceptible.6 Avery, left-hander Tom Glavine, and righty John Smoltz formed a talented group of young starting pitchers.7 Outfielders Ron Gant, who topped 30 home runs and 30 steals in 1990, and David Justice, named NL Rookie of the Year after a 28-homer season, were emerging offensive threats.8

Atlanta augmented its youthful core in the 1990-91 offseason, soon after hiring John Schuerholz as general manager.9 First, two-time Gold Glove third baseman Terry Pendleton, slowed by injuries with the St. Louis Cardinals, agreed to a four-year, $10 million free-agent contract that made him the highest-paid player in franchise history.10

But Atlanta’s blossoming youth and agate-print activity made only a mild impact on external expectations. The hometown Atlanta Journal-Constitution forecast a fourth-place finish for the 1991 Braves, observing, “[h]aving finished no higher than fifth since [1984], the Braves should be able to call the season a relative success.”13

Once the season opened, the Los Angeles Dodgers—fortified by free-agent signings Darryl Strawberry, Brett Butler, and Kevin Gross—and defending World Series champion Cincinnati Reds remained around .500, enabling Atlanta to stay in the race. Five wins in six games in early May left the Braves in first by percentage points on May 9.14

Avery went eight innings in Atlanta’s 9-2 win over the Cardinals on May 7. With three wins, he had matched his 1990 total.15

Though their record was modest at 13-11, the Braves held first place in May for the first time since 1984. They traveled to Pittsburgh for a three-game series with the Pirates, who were fresh off a sweep of the Reds and first in the NL East with an 18-9 record.16

Bream received a curtain call for his ninth-inning pinch-hit home run in the series opener on May 10, but by then the Pirates had a 5-2 win in hand.17 A night later, Gant’s two-run eighth-inning homer off reigning NL Cy Young Award winner Doug Drabek rallied Atlanta to a 3-2 win.18 The Braves occupied first for the third day in a row, heading into Avery’s Sunday afternoon start.

Pittsburgh’s Vicente Palacios had replaced an injured Bob Walk in the rotation in mid-April; through four starts, the 27-year-old native of Veracruz, Mexico, had a 2-0 record, including a shutout of the Expos on April 25, and a 1.52 ERA.19 Nixon dropped Palacios’ second pitch of the game into center for a single.

As the fleet Nixon, who finished in his league’s Top 10 in steals every season from 1988 through 1998, took his lead, Palacios switched to a slide-step delivery. He fired two high fastballs through Gant’s swing, then missed the strike zone with the next three pitches. Nixon ran on the 3-and-2 pitch, but Gant fouled it off.

After Palacios stepped off the rubber to check Nixon, he threw another high fastball. This time Gant connected, driving it off the concrete wall behind the left-field fence for his second two-run homer in two at-bats. The Braves led, 2-0.

Jay Bell had a one-out single in the bottom of the first, but Avery set down Andy Van Slyke and Bobby Bonilla on soft contact to end the inning. Avery went on to retire eight Pirates in a row, including strikeouts of Don Slaught, Curt Wilkerson, and Palacios.

Ineffectual in Avery’s first pass through the order, the Pirates remained out of gear the second time around. Two fourth-inning walks put runners on first and second with one out for Barry Bonds, the 1990 NL MVP. But Bonds chopped the first pitch off the plate, and Avery hustled to the bouncing ball and threw to Bream for the out. Slaught popped to Belliard, stranding the runners.

Pittsburgh stirred again in the fifth when Wilkerson smashed a one-out liner into the gap in right-center, picking up a double when Justice misplayed the high hop off the turf. Palacios’ groundout moved Wilkerson to third, and a walk to Gary Redus—playing first base in the Pirates’ righty-heavy lineup—put runners at the corners for Bell. Avery missed high with the first pitch, then received a mound visit from pitching coach Leo Mazzone. With the count 2-and-2, Avery fanned Bell on a curveball to end the inning.

Palacios had kept the Pirates in the game after the first, blanking the Braves on two hits over the next four innings. He ended the fifth by getting Gant to swing and miss at a full-count pitch with a runner on third.

But Pendleton led off the sixth with a single, bringing up Justice. Palacios had worked the inside of the strike zone in Justice’s first two at-bats, a strikeout and a popup. Justice now adjusted by opening his stance slightly. On the second pitch, he brought his hands inside and ripped an inside fastball over the right-field wall for a two-run homer. Atlanta’s lead was 4-0.

The Pirates attempted to rally once more in the sixth. Van Slyke’s check-swing grounder went through Pendleton’s legs for an error. The 6-foot-3, 210-pound Bonilla, on his way to leading the NL in doubles, surprised the Braves by bunting toward third.20 Pendleton and Avery had no play, Bonilla had a single, and Pittsburgh had runners at first and second with none out.

Past the 90-pitch mark, Avery still had enough to induce four groundballs in a row. After the Braves turned Bonds’ grounder into a force at second, Slaught’s infield single drove in Van Slyke, breaking the shutout and bringing the tying run to the plate. But two more harmless bouncers from Lloyd McClendon and Wilkerson preserved Atlanta’s lead.

Braves manager Bobby Cox pinch-hit Lonnie Smith for Avery in the seventh and turned the game over to Berenguer, who closed out the Pirates with three hitless innings.21 Atlanta added two more runs in the eighth, with top-of-the-order speed again a catalyst. Gant reached on an infield single, stole second, and came around on groundouts by Pendleton and Justice. Jeff Blauser’s triple then drove in Bream.22

“I think the Pirates were clocking his fastball in the mid-90s,” Mazzone said.23 “But again he wasn’t forced to narrow his pitches down to his fastball. He got ahead of almost everyone.”24

Winning their fourth road series in five tries, the Braves stayed in first for another day.

“They remind me of us so much, it’s incredible,” Bonilla said, remembering Pittsburgh’s emergence with young talent a few seasons earlier.26 “They remind me of us toward the end of ’87. You can see it. They look confident. They know they can win. They’re starting to make their move.”27

The Braves made their move after the All-Star break, going 55-27 from July 11 through October 5 to wrest the division from the Dodgers. Atlanta’s mix of youth and experience became the first National League team to finish in first after a last-place season.28

Avery contributed to the pennant push by winning his final five regular-season decisions to finish with an 18-8 record.29 He then spearheaded Atlanta’s NLCS upset of the Pirates with series-turning 1-0 wins in Game Two and Game Six, earning MVP honors with 16⅓ scoreless innings—an October run of excellence previewed on a May afternoon at Three Rivers Stadium.30

Violeta Chamorro, who had been elected president of Nicaragua in 1990, threw out the ceremonial first pitch before this game. She was in Pittsburgh to give the commencement address at Duquesne University’s graduation; her niece was a student at Duquesne at the time.31

This article was fact-checked by Bruce Slutsky and copy-edited by Len Levin. SABR members Jacob Pomrenke and Kurt Blumenau provided insightful comments on an earlier version of the article.

In addition to the sources cited in the Notes, the author consulted Baseball-Reference.com and Retrosheet.org for pertinent information, including the box score and play-by-play. He also used game coverage from the Atlanta Constitution, Pittsburgh Post-Gazette, and Pittsburgh Press newspapers; SABR Baseball Biography Project biographies of several players who played in the game, especially Jason Lenard’s biography of Juan Berenguer and Zac Petrillo’s biography of Terry Pendleton; and a YouTube video of WTBS-TV’s game broadcast, posted by This Is Where You Find Baseball and available at the link below.

20 Bonilla noted afterward that it was the second time in his career that he had bunted for a hit. “The other time was in St. Louis in a similar situation,” he told the Pittsburgh Post-Gazette. “We were down four runs [in that game] and we needed baserunners. Avery was throwing good. I was trying to break his rhythm, plus give Barry runners on first and second.” Paul Meyer, “Familiar-Looking Braves Smack Bucs, 6-1,” Pittsburgh Post-Gazette, May 13, 1991: 9.

21 Berenguer had the most effective season of his 15-year major-league career in 1991, posting a 2.24 ERA in 49 relief appearances and limiting opponents to a .189 batting average. In August, however, he suffered a stress fracture of his right arm while playing with his children and missed the rest of the regular season and all of the postseason. I.J. Rosenberg, “Clubhouse Confidential,” Atlanta Journal-Constitution, October 20, 1991: F5.

22 Blauser was filling in at second while Jeff Treadway recovered from a hamstring injury. I.J. Rosenberg, “Blauser’s Producing in Role as Part-Timer,” Atlanta Constitution, May 13, 1991: E6.

28 Jack Warner, “It’s Atlanta: City Goes Crazy Over Miracle Team,” Atlanta Journal-Constitution, October 6, 1991: A1. Coincidentally, the 1991 Minnesota Twins, who won the American League West after finishing last in 1990 and defeated the Braves in the World Series, were the first AL team to go from worst to first.