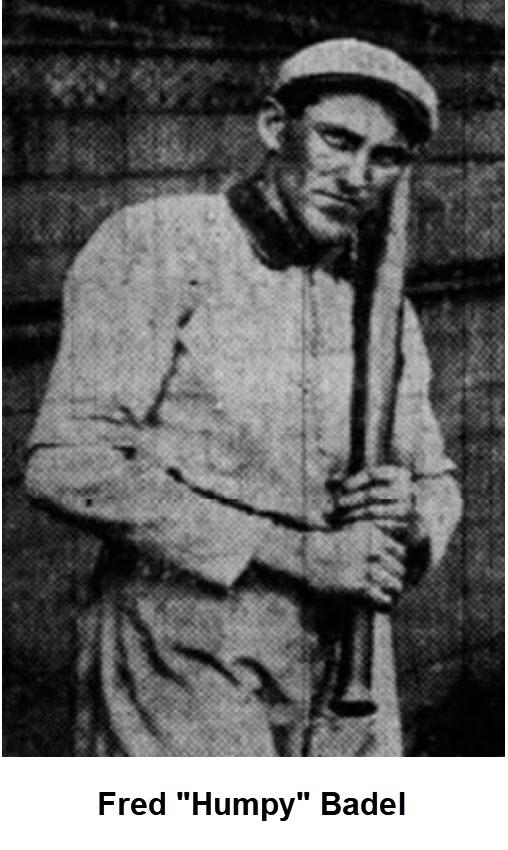 Under the leadership of manager George Stallings, the Buffalo Bisons won the Eastern League championship in 1904 but fell to fifth place in the eight-team league in 1905. Entering the 1906 season, fans were enthused about the Bisons’ chances after Stallings procured new talent for the team. Among his acquisitions were William Thomas, a pitcher from California, “said to be a second [Christy] Mathewson”1; George McConnell, a tall, rangy first baseman from Tennessee; and Fred Badel, a fleet outfielder from Pennsylvania who was born in Germany. Thomas had pitched in the Pacific Coast League for three seasons. McConnell and Badel were teammates on the 1905 Johnstown (Pennsylvania) Johnnies of the Tri-State League.

Afflicted with kyphosis, Badel was a “hunchback” with a noticeable hump on his back. It did not interfere with his ballplaying, but it attracted considerable attention, and he was nicknamed “Humpy” and “Humpty.” His teammates frequently patted his hump, believing it would bring them good luck. Badel was a natural comedian who kept his teammates in stitches with his humor; he “bubbles over with something original all the time.”2 The happy-go-lucky German “whistles and sings on and off the field and is continually putting in some German lines.”3

The Bisons began the 1906 season impressively, winning nine of 14 games on the road.4 But along the way, William Thomas was mysteriously lost. After the game in Providence, Rhode Island, on May 3, the team traveled overnight by steamship to New York City. Thomas shared a room on the ship with pitcher Joe Galaski. According to Galaski, they retired shortly after 10:00 p.m., and when Galaski awoke at 6:00 a.m., there was no sign of his roommate. It was surmised that Thomas went on deck during the night and either fell or jumped overboard.5 His body was not found.

The Bisons played their home opener on Monday, May 14, at Olympic Park against the Jersey City Skeeters. Led by John Powell’s 65th Regiment Band, the teams traveled by automobile in a grand parade through the streets of Buffalo. When they arrived at the ballpark, they were greeted by 11,836 fans, a “mass of humanity” that “filled every nook and cranny.”6 Fans who had arrived late “had to either stand or sit on house tops in order to witness the game, and many went so far as to even climb telegraph poles and sit on the raw edge of the fence.”7 The game-time temperature was about 58 degrees with a chilly wind, though “the sun was beaming joyously.”8 The grounds were wet from recent rains, and the grass on “the billiard-like field” was “greener than ever.”9

The visiting Skeeters, managed by Billy Murray, did their pregame warm-ups first, and then a gong sounded and a “herd” of Bisons took the field for their warm-ups amid “a mighty roar of cheering which lasted for several minutes.”10 The home team wore “dazzling” new maroon and white uniforms.11 Pinned to the left arm of each Bison was a “little black flag of mourning for Pitcher Thomas.”12 When the gong sounded again, the teams assembled in the infield with Buffalo Mayor James N. Adam and Bisons team President Jacob J. Stein. Mayor Adam made a short speech to the ballplayers and then tossed a new baseball to Bisons pitcher Rube Kisinger. (The crowd could not hear what the mayor said, “but he meant what he said, evidently, for his hand was clinched and his head shook, denoting emphasis.”13) Kisinger went to the pitcher’s box with a big grin as the band played “Reuben, Reuben, I’ve Been Thinking.” Count Campau, the sole umpire, “arranged his facial and body preservers”14 and shouted “Play ball!” and the game commenced at 4:15 p.m.

George Merritt, the “big auburn-haired twirler” of the Skeeters,15 dueled with Kisinger, and each pitcher allowed only one hit through 3½ scoreless innings; the sole Buffalo hit was Badel’s infield single in the first inning. Badel led off the bottom of the fourth by driving the ball into the crowd in deep right field for a ground-rule double, and he came home on McConnell’s rousing double.

Jersey City scored twice in the top of the fifth, on singles by Charlie Hanford, John Butler, and Walt Woods, and a ground-rule double by Joe Raidy. The Bisons responded with two runs in the bottom half. Rabbit Nattress singled with one out, and Bobby Wood drew a walk after fouling nearly a dozen balls out of the ballpark. It was comical to see, as umpire Campau, “custodian of the white sphere,” tossed each new ball to Merritt, who rubbed it in the dirt before delivering it to the plate.16 Perhaps worn out from the effort, Merritt threw a wild pitch to Kisinger, and both runners moved up a base. Nattress scored and Wood moved to third on Kisinger’s fly ball, which was caught by Hanford in short right field. Badel doubled down the third-base line — his second double of the game — and Wood trotted home.

In the top of the sixth, the Bisons’ second baseman and captain, George Smith, stopped a hot shot off the bat of Wally Clement for the first out. Kisinger fanned the next two Skeeters, Joe Bean and Pete Cassidy, and both men complained uninhibitedly to Campau. The stern umpire threw Bean out of the game for using “insulting and vile language.”17 Bean, who was the Skeeters second baseman and captain, was replaced by Bill Keister at second base.

The Bisons added a run in the bottom of the sixth by some clever baserunning. Jim Murray led off with a single to right field. McConnell followed with a well-placed sacrifice bunt that traveled about 20 feet down the third-base line. As McConnell was thrown out at first, Murray scampered all the way to third base, catching the Skeeters off-guard with his daring. Murray then scored on Hunter Hill’s sacrifice bunt to the right side of the infield. The Bisons scored again in the eighth inning, as Jake Gettman doubled to right field, stole third base, and came home on Murray’s infield out.

The Skeeters were unable to mount a comeback against Kisinger’s fine pitching and the solid Buffalo defense. The final out of the game was “a spectacular, one-handed, diving catch by McConnell, of Hanford’s fly near the right field crowd.”18 The final tally was Buffalo Bisons 5, Jersey City Skeeters 2. A disgruntled Cassidy of the losing team followed Campau after the game and “shoved him several times.”19

With the victory, the Bisons took sole possession of first place in the Eastern League. The Buffalo press heaped praise on Badel, McConnell, and Kisinger. Badel is “the one with a hump, and why not, if he be a true Bison,” quipped the Buffalo Evening News.20

The Buffalo Bisons won the 1906 Eastern League pennant (the Jersey City Skeeters finished second, 3 ½ games back), and the Bisons defeated the Columbus (Ohio) Senators, champions of the American Association, in the Little World Series. But they did it without Badel, who jumped his contract in July and returned to the Johnstown Johnnies. It is unknown why Badel left the Bisons, but a letter to the Buffalo Times by a writer identified as “M.D.P.” offers a possible explanation:

“The unthinking and unfeeling element of this city no sooner set eyes on this man, whom an unkind Nature had deformed, than it immediately dubbed him ‘Humpy’ Badel. During the progress of the games played at home this title was handed out to him in various forms. That it must have been galling to his sensibilities is beyond question. The crowd, however, never could be brought to see it in that light, but in its brutality kept reminding the poor fellow of his physical misfortune.”21