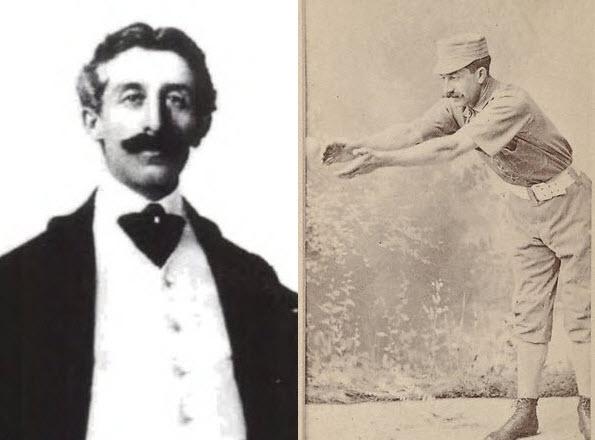 In a career that spanned from 1885 to 1905, Count Campau demonstrated power at the plate, grace in the outfield, and exceptional speed. He was an itinerant minor-league star who played for teams in at least 19 cities, including three stops in the majors. A respected and effective leader, Campau served as the captain or playing manager on many of his teams. He was given his unusual nickname because he resembled an Italian nobleman.

Charles Columbus Campau (pronounced “Com-po”1) was born on October 17, 1863, in Detroit. He was descended from a prominent Detroit family of French ancestry. His father, Charles F. Campau, was a real-estate agent in Detroit.

Young Charles played baseball while attending the University of Notre Dame, and in 1884 he played right field and third base for the Cass Club, one of the best amateur teams in Detroit. Among his Cass teammates were future major leaguers Al Buckenberger, Bob Leadley, John Rainey, and Rasty Wright.2

Campau’s professional career began on an Erie, Pennsylvania, team in the Interstate League in 1885. After the team disbanded in July, he finished the season on a London, Ontario, club. The following year he played center field for the Guelph (Ontario) Maple Leafs, an independent team managed by Buckenberger.3 The Maple Leafs reportedly won 53 of 62 games.4

In 1887 Campau’s work in the Southern League was remarkable: a .393 batting average with 17 home runs, a league-leading 18 triples, 133 runs scored, and 100 stolen bases in 113 games. He began the season with Savannah and moved to New Orleans when the Savannah team disbanded at the end of May. Campau quickly impressed the New Orleans fans. He homered twice against Nashville on June 6 and three times the next day.5 To show their appreciation, the fans gave him $57 and two hats.6 With his help, the New Orleans Pelicans won the 1887 Southern League championship.

Campau began the 1888 season with the Kansas City Blues of the Western Association and was hitting only .227 when he was acquired in early July by his hometown Detroit Wolverines, the reigning National League champions. He served as a temporary replacement for Detroit’s injured right fielder, Sam Thompson. Campau went hitless in his major-league debut on July 7; his first major-league hit came two days later, a single off Washington’s Jim Whitney.7 Facing Pittsburgh’s Ed Morris in the first game of a doubleheader on July 24, Campau hit his first major-league home run, “a splendid drive to right center,” and “galloped around the bases like a race horse.”8

In his first 23 games for the Wolverines, Campau hit .274 and made only one error in right field,9 but he averaged only .168 and made seven errors in his next 47 games. Altogether, he stole 27 bases in 70 games, and after the season a Detroit jeweler awarded him a silver-ball trophy as the best baserunner on the team.10 The fleet Campau had reportedly one of the best “feet-first” slides in the game, “and should the ball go wide he is up in a twinkling and on his way to the next base.”11

The Wolverines finished in fifth place and dissolved after the season. Years later, Campau praised the valuable mentoring he received from two of his Detroit teammates, first baseman Dan Brouthers and catcher Charlie Bennett. Brouthers was like a father to him, he said, and Bennett was “the greatest catcher the game has ever seen, bar none.”12

In 1889, the Wolverines re-emerged as a minor-league team under manager Bob Leadley, and the team won the International Association pennant. Campau hit .285, scored 111 runs, and stole 69 bases in 112 games. On September 17, he hit for the cycle in an 18-7 rout of Hamilton (Ontario).13

Campau stood out from other ballplayers. He was “graceful and distinguished looking,” and handsome with his dark complexion and “luxuriant” mustache.14 Fans could hear his “deep, resonant voice” when he coached his teammates from the sideline.15

After beginning the 1890 season with the Wolverines, Campau returned to the major leagues in late June when he was acquired by the St. Louis Browns of the American Association. He was immediately installed as captain of the Browns and led the team to victory in 27 of 36 games. From July 5 to July 23, he made at least two hits in 15 consecutive games, establishing a major-league record that still stands (through 2017). His batting average during the streak was .522.16 But after a string of five losses and one tie, he was replaced as captain.

Though Campau played in only 75 of the Browns’ 139 games in 1890, he led the league with nine home runs. Among these were two grand slams, the first on July 8 off Dan Casey of Syracuse and the second on August 24 off Red Ehret of Louisville. After the second slam, the St. Louis crowd “yelled itself hoarse” and showered the field with cigars for Campau.17 He did not look like a home-run hitter; his height was reported to be 5-feet-10 or -11, and his weight ranged from 160 to 175 pounds.18 “Although slight in build, he seemed to get extraordinary power from his wrists and arms.”19

Campau’s .322 batting average ranked ninth in the American Association that year, and his .513 slugging percentage ranked second, but in a cost-cutting move, the Browns’ skinflint owner, Chris Von der Ahe, released him with two weeks remaining in the season. Von der Ahe then had the nerve to ask him to sign a contract for the next season. Campau declined.20

As captain of the Troy (New York) Trojans in 1891, Campau had an off-year, hitting only .236. The following season he joined the Columbus (Ohio) Reds of the Western League, and when the league disbanded in mid-July, he rejoined the New Orleans Pelicans in the Southern Association. He was captain of the Columbus and New Orleans squads, and instilled “a great deal of snap and go” in them, even coaching them in song.21 His lively work on the coaching lines was “in itself worth the price of admission.”22

Campau was a speedster and challenged all comers to race him in pregame 100-yard dashes, which he invariably won. And in the outfield, “he covers ground like an early frost,” noted one reporter.23

The 1893 Southern Association season ended in August due to a yellow-fever scare; Campau departed New Orleans and finished the year on the Wilkes-Barre (Pennsylvania) Coal Barons of the Eastern League. He signed a contract to play for the Washington Senators in 1894, but by agreement with the Senators, he began the 1894 season as playing manager of the New Orleans Pelicans. He was immensely popular in New Orleans and was a “great drawing card” in the Southern Association. He was in no rush to return to the major leagues.24

The Southern Association season ended prematurely in early July of 1894; Campau led the league with 11 home runs and 50 stolen bases in the shortened season. In July he played two games for the Senators and two games for the Milwaukee Brewers, and finished the year with the Detroit Creams of the Western League. The next season he hit .359 for the Detroit team, now known as the Tigers.

Campau’s travels continued. He began the 1896 season as manager of the Seattle team in the New Pacific League and hit .403 with 13 home runs in 32 games before the league disbanded in mid-June. He joined the Kansas City Blues of the Western League in late June, and as a member of the Blues, he returned to Detroit and homered off Jack Fifield of the Tigers on July 31.25 The game was played at Detroit’s new Bennett Park, named for Campau’s mentor, Charlie Bennett. On September 24, Campau umpired a day-night exhibition doubleheader at the ballpark between the Tigers and Cincinnati Reds. The night game was quite a novelty, illuminated by electric lights.26

Campau played for the Rochester (New York) Bronchos, managed by Al Buckenberger, in 1899 and 1900, and helped the Bronchos win the 1899 Eastern League title. In 1901 and 1902, Campau played first base and managed the Binghamton Bingoes of the New York State League; in both seasons his team finished a close second behind the Albany Senators.

Every offseason since 1893, Campau resided in New Orleans and worked in various capacities at the New Orleans horse-racing track. He considered New Orleans to be home, and he accepted the opportunity to manage the 1903 New Orleans Pelicans and become part-owner of the team. But the Pelicans struggled, and he resigned at the end of June with the team in last place.27 He returned to Binghamton in July and managed the Bingoes with little success until he was let go in July of 1905.

For the next two years, Campau tried his hand at umpiring, in the New York State League, Eastern League, and Southern Association, but he grew tired of the abuse he received from players and fans. He spent the remainder of his career as an employee of horse-racing tracks in diverse locations: Florida, Illinois, Louisiana, Maryland, South Carolina, Texas, Utah, Wyoming, Ontario, Quebec, and Cuba. The Count never stayed in one place for long.

On April 3, 1938, Campau died of pneumonia in New Orleans at the age of 74. He left behind a widow, the former Corinne Young.28 They are interred at the Metairie Cemetery in New Orleans.

This biography was reviewed by Len Levin and checked for accuracy by the BioProject fact-checking team.

16 Computed by the author from box scores in Sporting Life.