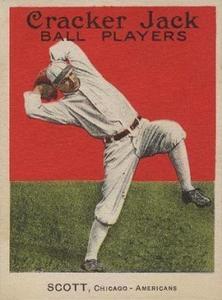 The year 1914 is defined by the beginning of World War I as well as the completion of the Panama Canal. It was also the third year that Griffith Stadium had been open, and on May 14, 1914, the stadium was host to one of the most amazing games in the history of baseball. The Washington Senators, led by Clark Griffith, played host to the Chicago White Sox, who were managed by Jimmy Callahan. It’s no surprise that a game between these two teams finished with such a low score. In that season both the Senators and White Sox had excellent pitching staffs. Chicago had the fourth-best team ERA of the 24 big-league teams (including the eight in the inaugural season of the Federal League) and the Senators were just one spot behind them. A lot of the Senators’ pitching success was due to Walter Johnson. He earned his nickname, the Big Train, for being one of the most dominating pitchers of his era, earning two MVP awards as well as the ERA title in five seasons. In 1936 he was a part of the inaugural class of inductees into the Hall of Fame.

However, on May 14, 1914, the fans at Griffith Stadium were treated to a pair of stellar pitching performances not from Johnson, but from the opposing moundsmen. The starting pitcher for the visiting Chicago White Sox, Jim Scott. Scott pitched a no-hitter for nine innings, but gave up two hits in the 10th and lost the game, 1-0. Scott, who grew up in Wyoming and acquired the nickname Death Valley Jim, was a hard-luck pitcher. Each year of his major-league career he posted an ERA well under 3.00, and at 2.30 is ranked 19th all-time in lowest career ERA, but he had a winning record in only two of his nine seasons in the big leagues and finished with a 107-114 slate.  Scott’s major-league career ended when he enlisted in the military to fight in World War I after the 1917 season.1 Scott had an astonishing career but somehow never received any form of recognition for his performance. After returning from the war, Scott had a nine-year career in the minors, winning 125 games, but with markedly higher ERAs.

The Senators starter, Doc Ayers, didn’t disappoint either that day, giving up just three hits in 10 innings pitched. Ayers, who picked up his nickname because he had been a medical student in Virginia, won 64 games and lost 78 in a nine-season career with the Senators and the Detroit Tigers, and had a career ERA of 2.84.

The Washington Post wrote of the Scott-Ayers pitching duel, “There has never been a greater ball game staged in this city.”2

After pitching nine brilliant innings, Scott had a disastrous 10th. He surrendered a leadoff single to Chick Gandil. Then on a 1-and-2 count, Howie Shanks smacked a ball into right field where Ray Demmitt made a diving attempt, only to miss the ball. Gandil scored and the game was over. Sportswriter Stanley Milliken of the Washington Post described Shanks’s hit as “like a thunderbolt out of clear sky.”3 The game had changed so quickly. Scott went from not allowing a hit for nine innings to surrendering two hits that dealt him the loss. It was a marvelous performance, but an unfortunate ending. The Chicago Livestock World described Scott’s experience as “only to be robbed of the fame and the feel of victory because the White Sox could not make one little run for him out of several good chances.”4

As for Ayers, he gave up a two-out triple in the first inning to first baseman Hal Chase, but then retired the side. In the second inning Chicago’s Ping Bodie led off with a single and Scotty Alcock reached on an error by Senators second baseman Ray Morgan. Ayers escaped the jam by getting a double-play ball. After that no one reached base until the sixth inning when Demmitt hit the ball to center field. The Post’s Milliken wrote, “Then came one of the best plays of the contest. [Clyde] Milan sprinted toward the scoreboard in right-center and picked up Demmitt’s drive with one hand. The runner tried to go to second but his life was snuffed out.”5

In the White Sox’ 10th, Senators third baseman Eddie Foster made a wild throw on a ball hit by Ping Bodie. Ayers walked the next batter, Alcock (the only walk he gave up). But Ayers escaped a jam yet again, and Scott was undone in the bottom of the inning.

Each pitcher struck out two batters. Scott walked two Senators; Ayers walked one. Milliken noted that the game “was replete with sensational plays not only in the infield but the outfield as well.”6

This game was the highlight, so to speak for both teams, in their 1914 season. The White Sox (70-84) ended up in seventh place while the Senators (81-73) took third place, though 19 games behind the Philadelphia Athletics. Washington’s bright spots were 28-game winner Johnson and Foster, who finished seventh in MVP voting. This game is one to be remembered as one of the greatest pitching duels ever to be hosted at Griffith Stadium.