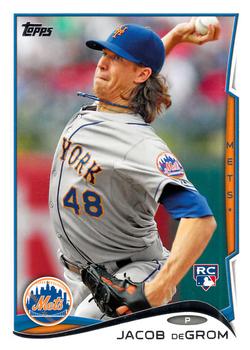 In the ledger of “unlikely multiple Cy Young Award winners,” Jacob deGrom might be near the top of the list. He was taken in the ninth round1 of the 2010 draft out of Stetson University, where he was primarily a shortstop, albeit one with an arm good enough to occasionally pitch for the Hatters squad during his junior year. The New York Mets selected him intending to turn him into a full-time pitcher.

Baseball America, a well-respected source for prospect rankings, didn’t think much of the 6-foot-4, 185-pound righty at first. In its 2011 “Prospect Handbook,” his was the last name of 15 on a ranked list of Mets right-handed starting-pitcher prospects.2 Sidelined for all of 2011 after Tommy John surgery, deGrom missed the cut for BA’s list of Mets top 30 overall prospects in 2012.

That 2012 season saw deGrom make 19 starts at two levels of Class A, yielding just under one baserunner per inning pitched (0.997 WHIP), with 96 strikeouts and 91 hits allowed in 111⅓ innings. Scouts and analysts noticed; prior to the 2013 season deGrom debuted on Baseball America’s Mets prospect list at 11th. Responding favorably to BA’s vote of confidence, deGrom pitched his way up from Class A to Triple A in 2013 and survived his first go-round in the offense-stacked Pacific Coast League, striking out 63 in 75⅔ innings there. He was added to the Mets’ 40-man roster after the 2013 season.

Baseball America moved him up to 10th in its organizational list prior to 2014, writing:

“DeGrom succeeds by pounding the zone and showing a clean arm action and bulldog mentality. … He sits at 92-94 mph with plus sinking life, and he can rear back for 98 when he needs it. DeGrom made progress with a straight changeup this season, giving him a good weapon against lefties, though he misses more bats against righties with a fastball and slurvy breaking ball. He’s working on improving the rotation and bite of his breaking ball. … He has a ceiling as a No. 4 starter or better.”3

At Triple A to begin the 2014 season, deGrom toyed with the PCL during seven starts, compiling a gaudy (by PCL standards) 2.58 ERA with 29 strikeouts against 10 walks in 38⅓ innings. The 25-year-old native of Florida got the call he had been waiting for in mid-May, as an injury replacement for reliever Gonzalez Germen. He had pitched in relief during spring training, and New York had planned on using him in that role for his debut appearance,4 as he reported to the team in time for the second game of the Subway Series at Yankee Stadium on Tuesday, May 13.

DeGrom wasn’t summoned to the mound that Tuesday night. Instead, an injury to starting pitcher Dillon Gee led manager Terry Collins to plug in deGrom as the starting pitcher two nights later at Citi Field, against those same Yankees. With a sizable crowd of 40,133 looking on, the lithe, shaggy-haired hurler toed the rubber against a Yankee squad with a composite .266 team batting average coming into the game.5

It was a veteran-laden lineup manager Joe Girardi sent out to face the rookie, but the savvy and experience of that crew might have been nullified by the “past-prime” status of some players. Seven members of the lineup were over 30. Longtime shortstop Derek Jeter turned 40 years old the following month and was batting .262/.340/.317 coming into the game. Right fielder Alfonso Soriano was 38 and second baseman Brian Roberts was 36. (Roberts and Soriano would be off the roster and out of baseball by the end of July, and the future Hall of Famer Jeter retired after the season.)

DeGrom’s first batter was left fielder Brett Gardner, who fouled off enough 94-mph fastballs and 85-mph changeups to see nine pitches, and on a 3-and-2 count lofted a fly ball to deep right for the first out. Jeter grounded out to short on deGrom’s first pitch to him, but Jacoby Ellsbury fought back from a 0-and-2 count to lace a line-drive double to right. DeGrom finished the inning with his first big-league strikeout, throwing a 95-mph four-seam fastball past Mark Teixeira for strike three.

Brian McCann opened the Yankees second with a single, but deGrom fanned Soriano swinging and induced a double-play grounder from Yangervis Solarte. After needing 21 pitches to get through the first, the rookie retired the side on only 13 pitches in the second. Another 13 pitches completed the third, aided by a line-drive double play.

DeGrom, a .214 batter in Triple A that year, collected his first big-league hit on a single to center with one out and one on in the third. It happened to be the first hit by any Mets pitcher in 2014. (They had been a record-setting 0-for-64 to start the season).6 He needed only seven pitches to get through a one-two-three fourth, and racked up two more strikeouts (Soriano and Solarte, both looking) in the fifth.

While deGrom was holding the potent Yankee lineup scoreless, his opponent on the mound and fellow June 2010 draft selection, Chase Whitley, was matching deGrom zero-for-zero in his own major-league debut. The Mets were failing to cash in on their few opportunities to dent the scoreboard against Whitley. They had first and third with one out in the third and couldn’t capitalize, and when they placed runners on second and third with two out in the fifth against Whitley, Dellin Betances relieved and got Eric Young Jr. to ground out to third to end the inning.

A 10-pitch sixth inning for deGrom netted two more strikeouts (one swinging, one looking), and with only 78 pitches thrown and him not scheduled to bat the next inning, he was sent back out for the seventh. His fastball had lost a couple of ticks from the start of the game, now coming in at 91 to 92 mph, and he was now mixing in a curveball more to go with his slider and changeup.

Ellsbury flied out to left for the first out in the seventh, but Teixeira walked on five pitches. With a shifted infield for the lefty McCann, deGrom got him to ground to second baseman Daniel Murphy, who flipped to third baseman David Wright, covering the bag at second, for the force. It should have been a double play, but Wright’s relay to first baseman Lucas Duda – an unusual throw for a longtime third baseman – bounced in the dirt and McCann was safe. That would cost deGrom one batter later.

DeGrom got ahead of Soriano with a slider, but the Yankee right fielder was ready for the next slider and whacked it for a double to center field. McCann, not fleet afoot, managed to score on the play because of a poor relay throw from second baseman Ruben Tejada to catcher Juan Centeno, giving the Yankees a 1-0 lead. DeGrom steadied himself and got Solarte to line out hard to Murphy to end the threat. With that, deGrom’s night was done. His final line: seven innings, four hits, one run, two walks, and six strikeouts in an efficient 91 pitches.

As would so often be the case in his career,7 the Mets wasted a sterling deGrom pitching performance; they mustered only three hits and three walks against a quartet of Yankee hurlers. DeGrom, pitching in front of his parents and fiancée, took the tough-luck 1-0 loss.

After the game, Wright praised the rookie: “It’s amazing. … deGrom’s performance tonight was spectacular. Some of the [Yankees], when they got on third were very complimenting. …”8

“The first inning, I was nervous, but I settled down after that and I felt good out there,” said deGrom. He added, “It was awesome facing those guys. I watched [Derek] Jeter growing up. I couldn’t ask for a better team to make my debut against. … It makes you feel good when you go and your debut is good. It’s a feeling I’ll probably never have again. It was really cool.”9

The baseball world would soon learn of deGrom’s coolness, as he stayed with the Mets for the rest of the season, going 9-6 with a 2.69 ERA in 22 starts, striking out 144 against 43 walks in 140⅓ innings. He garnered 26 of the 30 first-place votes to secure the NL Rookie of the Year Award, and his career took off from there … with four All-Star selections and two Cy Young Awards through the 2021 season.

1 DeGrom’s 43.4 career Wins Above Replacement (WAR) through 2021, as determined by Baseball-Reference.com, is the highest for a ninth-round pick since Mark Teixeira (1998) accumulated 50.6 WAR. Besides deGrom, Whit Merrifield (17.0 WAR through 2021) is the only other player selected in the ninth round in 2010 to accumulate more than 1.3 career WAR through 2021.

2 Three of the Mets’ top four right-handed starting pitching prospects on that list eventually made their major-league squad. Jenrry Mejia (ranked first), Matt Harvey (second), and Dillon Gee (fourth) all logged significant innings for the team, though Mejia was eventually shifted to the bullpen, and then ended up permanently suspended by MLB for repeated steroid use violations. Harvey has battled various injuries and endured major surgeries (Tommy John and Thoracic Outlet Syndrome) which short-circuited a very promising start to his big-league career, but he was still pitching as of 2021. Gee started 110 games for the Mets between 2010 and 2015 before being dealt to the Royals.

7 Through 2021, deGrom had been supported by an average of 3.7 runs per start during the innings he pitches, a half-run lower than the league average. So while he had garnered a quality start (six or more innings with three or fewer runs allowed) in an amazing 74 percent of his starts (league average is 43 percent), he had been saddled with 27 losses in those quality starts. His career record of 77-53 understated his brilliance, as he’d been the victim of 68 no-decisions in his 198 career starts. During his Cy Young campaign in 2018, he compiled a 1.70 ERA, but went only 10-9 due to getting no more than three runs of support in 21 of his starts.