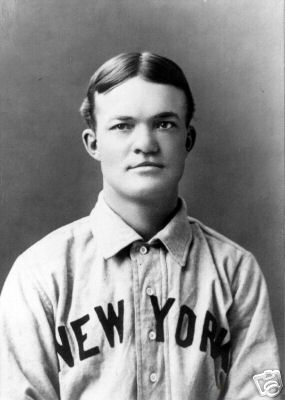 May 16, 1902, is noted for an occasion that has never since been duplicated: a major-league game in which two deaf players faced each other as opponents. Luther “Dummy” Taylor was a pitcher for the New York Giants. The team was visiting Cincinnati for a weekend series against the Reds. The hometown club’s roster included a veteran center fielder named William “Dummy” Hoy.

In the early part of the twentieth century, the derogatory moniker “Dummy” was commonplace, as were similar stereotypes assigned to different groups of athletes. Despite the reluctance of some coaches and players to accept deaf athletes on the diamond, Taylor and Hoy were both blessed with talent. Both possessed a fierce determination to play at the highest level of baseball; it enabled them to succeed at their positions and to command the respect of their teammates. Taylor, commenting years later on the dummy label said, “It didn’t hurt us. Made us fight harder.”1

When Luther Taylor and William Hoy met on the diamond that day, they were at nearly opposite points in their careers. Taylor was still in his early stages, having started with the Giants in 1900. He became known for his unorthodox corkscrew windup2 and “the best drop ball delivered across the plate by any pitcher.”3 Hoy was in what would be the last season of a fourteen-year run in four major leagues, including the American and National League, the Players League and the American Association. Hoy was forty years old. He was still a leadoff hitter, still playing center field, and widely respected by his peers for his competitiveness.

That Friday, May 16, 1902, was also a special day for the hometown Cincinnati fans: it had been chosen as Dedication Day,4 in honor of the brand-new ballpark built in time for the 1902 season. The new field, Palace of the Fans, cost $30,0005 and was built to replace League Park II. Unique for its time, the ballpark featured a concrete and iron grandstand with columns modeled with ancient Greek and Roman motifs.6 There were some odd dimensions. The right field foul line measured 450 feet, the distance decreasing to 375 in right center. Straightaway center field was 400 feet, increasing to 418 feet in left-center and decreasing again to 360 feet in left field.7 Over the next decade, only 15 balls would be hit on a bounce or directly over the fences at the Palace of the Fans. The ballpark was the site of 130 inside-the-park homeruns.8

On behalf of Reds’ owner John T. Brush and the Cincinnati Baseball Club, local Judge Howard Ferris presented the new facility to Mayor Julius Fleischmann and the 5,000 to 10,000 fans — depending on sportswriters’ estimates — present. Judge Ferris concluded with “I now turn over to you forever the Palace of the Fans.”9

The starting pitchers for the game were Taylor for the Giants and Frank “Noodles” Hahn, for the Reds. The left-handed Hahn had led the National League in strikeouts the previous three seasons and led the league in innings pitched and complete games in 1901. He retired the Giants in the top of the first inning, stranding a runner at first base.

The historic moment that pitted Hoy against Taylor in the Cincinnati half of the first inning passed uneventfully. Hoy was the Reds’ leadoff batter. Both players took a moment to recognize each other. Hoy paused for moment to sign, “I am glad to see you” and to give Taylor a friendly greeting.10 Taylor acknowledged Hoy’s gesture, before Hoy drove a single past shortstop Joe Bean to center field.11

The Reds’ next batter, John Dobbs, bunted, but Taylor fielded the ball and threw it to Bean to force Hoy at second. Taylor got out of the inning when Jim Jackson caught Tommy Corcoran’s fly ball to deep center. From that point the game continued as a scoreless contest until the bottom of the eighth inning.

The Giants had mounted a threat in the fourth inning. Billy Lauder and Jim Jones reached base on misplays by shortstop Corcoran. Jack Doyle’s grounder forced Jones at second. Lauder attempted to score on the play and was thrown out at home. Doyle stole second but Bean flied out to Dobbs to end the threat.12

In top of the fifth, Frank Bowerman reached third base with a triple for the Giants, but was stranded there.13 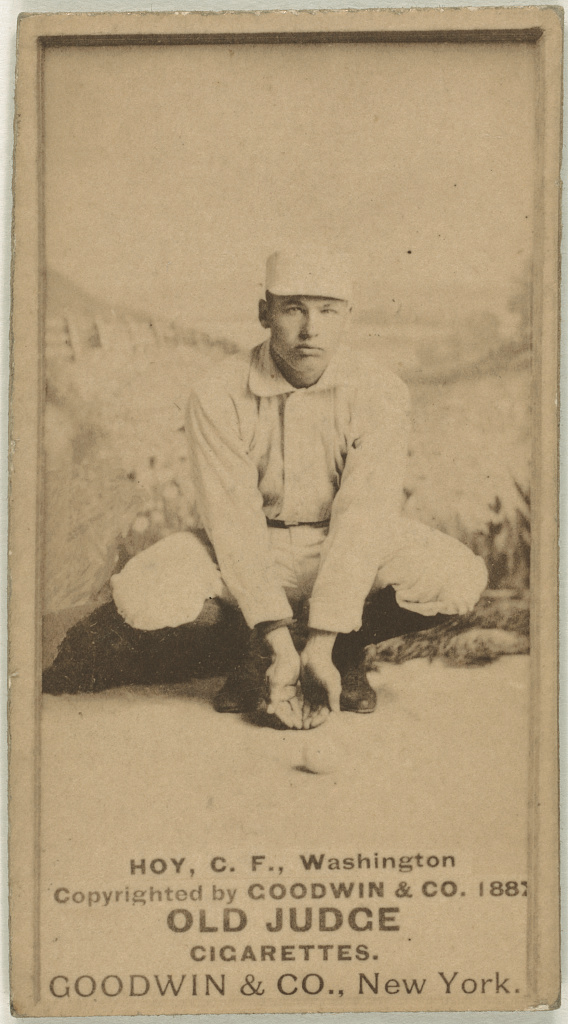 The scoreless duel ended in the bottom of the eighth inning, with the help of the Giants’ Taylor himself. Hoy led off with an infield single, his second hit of the game. Taylor, known for reading baserunners’ intentions and then picking them off base, attempted to pick off Hoy at first base. The pickoff throw was wild, allowing Hoy to reach third base.14 After Taylor hit the next batter, Dobbs, Jake Beckley lined out to George “Rip” Van Haltren in center, far enough to allow Hoy to score the first run of the game. Sam Crawford flied out. Taylor threw a wild pitch allowing Dobbs to advance to second. George Magoon’s single to center scored Dobbs. Magoon reached second on the throw home.

The Giants continued being charitable to the Reds’ offense when Corcoran hit a high fly to shortstop Bean, for what should have been the third out, but Bean dropped the ball. The error permitted Magoon to hustle around third base and score the Reds’ third run. Harry Steinfeldt grounded out to end the eighth inning.15

Given Hahn’s pitching success to this point, the Reds entered the ninth inning with a comfortable 3-0 lead.

The euphoria that engulfed the hometown fans anticipating a sure victory was short-lived. The Reds could not hold the lead. Hahn quickly found himself in trouble when the Giants loaded the bases on two singles and a walk. Hahn struck out Bean, but then yielded a single to Jackson, a double to Bowerman, and a single to George Yeager, batting for Taylor. Before the inning was over, the Giants had scored five runs. Tully Sparks came on in relief of Taylor. He gave up a leadoff single to Heinie Peitz, but retired the next three Reds hitters in order, including a groundout by Hoy,16 who finished two for four, a walk and a run scored.

A column in the next day’s Cincinnati Enquirer piled on the criticism, stating in large type, “Tornado hits Reds in the Ninth,” followed by “Slaughtered in the Eleventh Hour” and “A Sorrowful Finish on Dedication Day” and concluding with “Pitchers’ Duel Transformed into a Massacre.”17

The New York Times, striking a more positive tone than the Reds’ press, wrote, “The New York baseball team kept their surprise until the ninth inning of today’s game with Cincinnati, and then fell on the delivery of pitcher Hahn with such ferocity that five runs were chalked to their credit before the required three were out.”18

While the Giants and Reds played each other 19 more times in 1902, Taylor and Hoy never faced each other again. Taylor pitched twice more against the Reds, but Hoy was absent from the lineup both times.19  He was released by the Reds in mid-season.

For baseball history, deaf athletes playing against one another marked a special moment; through 116 succeeding seasons this meeting of Hoy and Taylor hasn’t been repeated. Hoy and Taylor remained friendly long after their baseball careers were over. More than 40 years later, on August 29, 1942, the two men were batterymates in a softball tournament in Toledo, Ohio.20

And the Palace of the Fans hardly lasted forever, as Judge Ferris had prophesized. It was taken down in 1912 and replaced on the same grounds by a new ballpark called Redland Field.21 That ballpark was renamed Crosley Field in 1934.22

A digitized box score for this game is not yet available on Retrosheet.org or Baseball Reference.com. The following box score appeared with a summary of the game contemporaneously published in the Detroit Free Press: “Shattered Red Hopes,” Detroit Free Press, May 17, 1902: 10. 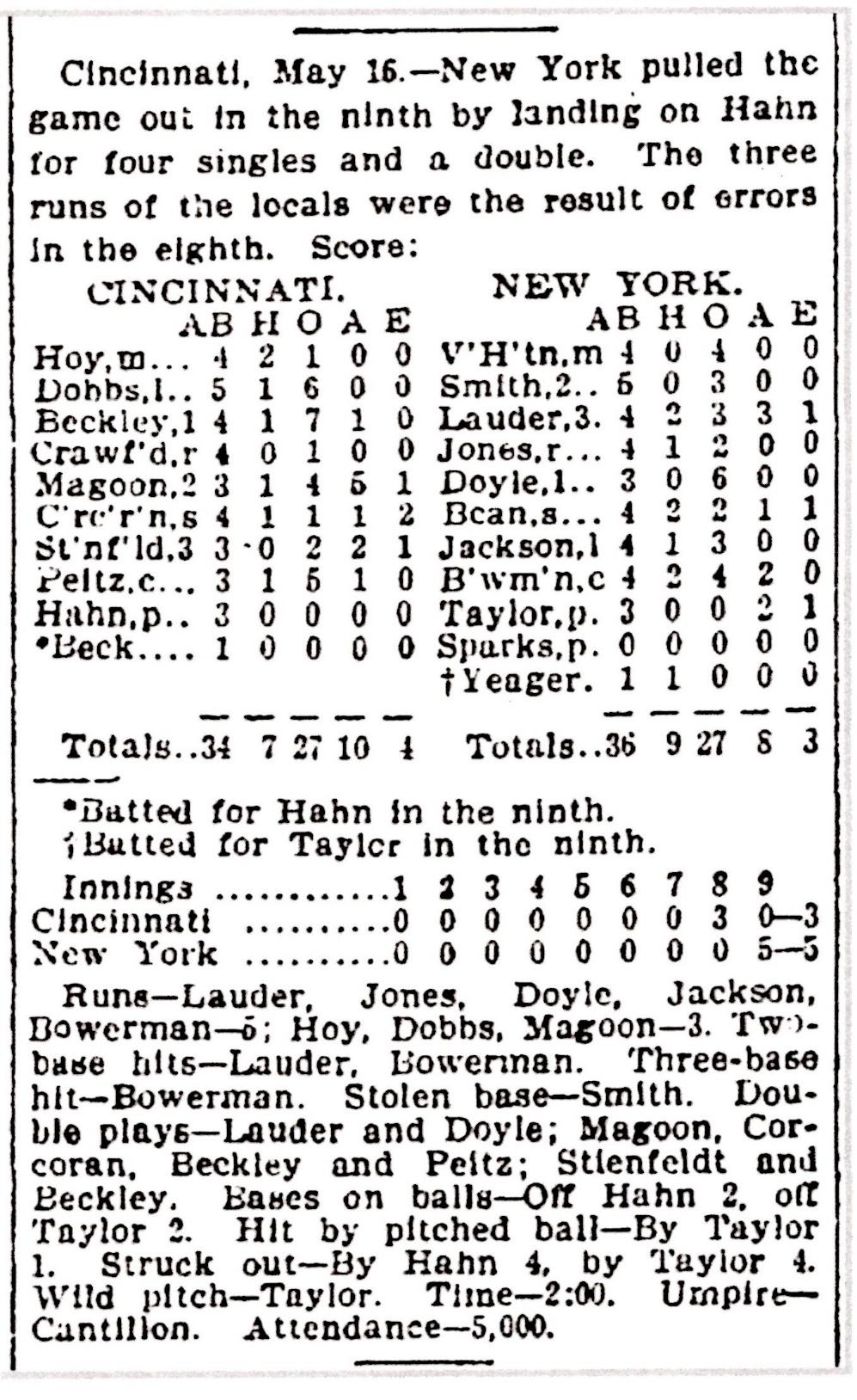 7 Ronald M. Selter,Ballparks of the Deadball Era: a Comprehensive Study of Their Dimensions, Configurations and Effects on Batting, 1901-1919 (Jefferson, North Carolina: McFarland & Co., 2012), 75.

21  Cincinnati’s Crosley Field: The Illustrated History of a Classic Ballpark, 40.