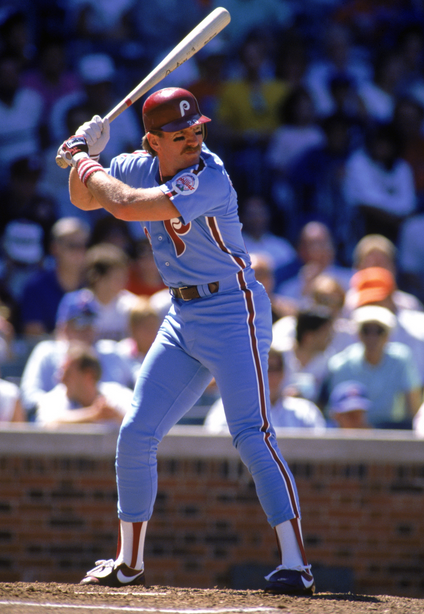 In what could be billed as one of the wildest games in major-league history, the Philadelphia Phillies and Chicago Cubs met on a Thursday afternoon in front of 14,952 fans at Wrigley Field. The wind was blowing out at 18 mph.1 A little more than four hours later, the Phillies emerged victorious, securing a 23-22 victory in 10 innings. The game featured 45 runs, 50 hits, 11 home runs, 127 batters, 11 pitchers, 15 walks, and 37 players. The visiting Phillies were paced by Mike Schmidt and his two home runs, including the game-winner. On the Chicago side, Dave Kingman smashed three home runs.

The Phillies had scored 13 runs against the Cubs the day before as Steve Carlton shut out Chicago, so their bats were warm. Their pitchers’ arms were also warm; the Phillies’ rotation and bullpen had the best earned-run average in the National League (2.91). Chicago batters had mustered only three hits against Carlton, but they exploded in this game.

Randy Lerch started for the Phillies and Dennis Lamp got the nod for the home team. Philadelphia wasted no time in jumping on Lamp and Chicago, sending 10 batters to the plate. Schmidt and Bob Boone hit three-run homers. Lamp retired only one of the seven batters he faced. (Bake McBride was gunned down at home plate on a Pete Rose comebacker to the mound.) With the score 6-0, Cubs manager Herman Franks pulled Lamp in favor of Donnie Moore. Moore struck out Rudy Meoli but gave up a solo home run to Lerch before McBride was retired. Philadelphia had seven hits in the inning.

Larry Bowa, the Phillies’ shortstop, told reporters, “Whenever Lerch pitched, we never scored any runs for him. We got those early ones and said to him, ‘Okay, there’s your runs.’ But you could tell it wasn’t going to be enough.”2 Lerch pitched to six batters in the bottom of the first, and five of them got hits. The first three Cubs batters singled, scoring one run, and then Kingman launched a three-run blast. With one out, Jerry Martin doubled to right field, and Lerch was sent to the showers by skipper Danny Ozark. Doug Bird relieved and allowed two more runs on a single and triple. The Cubs’ seven hits accounted for six runs.

Thirteen Phillies faced Cubs pitching in the third inning, and eight of them scored. Willie Hernandez relieved Moore after six batters had reached and four runs had scored. Again the Phillies had seven hits in the inning, including a three-run homer by Garry Maddox off Hernandez, but they also had two walks and a hit batsman. Hernandez also pitched the fourth and fifth innings, allowing two runs in the fourth and four in the fifth. In the bottom of the fourth, Kingman connected with his second blast, a two-run homer, and Steve Ontiveros sent a solo shot over the wall. By the time the Cubs came to bat in the bottom of the fifth, Philadelphia had its largest lead of the game, 21-9. It would not hold. Bowa later commented archly, “When we got up by 12, I figured we could win if we could hold them under two touchdowns and could block a couple of extra points.”3

Tug McGraw, the third Phillies hurler, started the bottom of the fifth. Barry Foote greeted him with a single, Ted Sizemore reached on an error by Schmidt, and pinch-hitter Steve Dillard, batting for Hernandez, walked to load the bases. McGraw walked Ivan de Jesus, forcing in a run. After Mike Vail flied out to center, Bill Buckner launched a grand slam. Kingman drew a walk, and an out later, Martin followed with a two-run homer. Foote doubled, and Ozark brought in Ron Reed to relieve McGraw. Reed got Sizemore to ground out to short to end the inning, but the Cubs had put a big dent in the Phillies’ lead.

McGraw recalled, “I gave up seven runs in one-third of an inning. It took me the rest of the year to get my ERA back into [three] digits.”4 Only four of the runs were earned.

Chicago’s Bill Caudill and Ray Burris, who had both pitched the day before, combined for three innings from the top of the sixth through the top of the eighth. Chicago scored three more runs off Reed in the bottom of the sixth, as the Cubs scored two on groundouts and Kingman hit his third homer. Suddenly the Phillies’ lead was down to two runs, at 21-19. Boone doubled in Greg Gross in the Phillies’ seventh to make it 22-19, but Chicago engineered three more runs in the eighth on RBI singles by Buckner, Martin, and Foote off Reed, and the game was tied, 22-22.

Bruce Sutter became the Cubs’ sixth pitcher in the top of the ninth inning, and he retired the Phillies, allowing only a walk to Meoli. The Phillies countered with Rawly Eastwick in the bottom of the ninth, their fifth pitcher of the game. He pitched a 1-2-3 inning and the game went into the 10th.

Sutter was perhaps the best reliever in baseball at the time. When he delivered a 3-and-2 split-fingered fastball to Schmidt with two outs in the top of the 10th, and Schmidt sent it deep into the left-field bleachers, the pitcher did not move. Afterward he commented, “I didn’t even turn around to look at it. I knew exactly where it was going.”5 Of Wrigley Field, Schmidt said, “Ballplayers often will say that you never can get enough runs to win in this park, but they always say it sarcastically. After today, they can forget the sarcasm.”6 The Phillies third baseman had gone 2-for-4 and walked four times in the game. Cubs manager Franks, “with 20-20 hindsight after the game, sighed and said he wished Schmidt had walked again.”7

Eastwick, in his second inning of relief, set the Cubs down in order in the bottom of the 10th and picked up his first win of the season. He was the only pitcher to retire the side in order; in fact, he retired all six batters he faced.

The two teams were 17-for-44 with runners in scoring position. The Phillies left 15 runners on base; the Cubs stranded only seven. The Phillies’ Bowa was 5-for-8 and teammate Maddox was 4-for-4 with four RBIs. Boone was 3-for-4 with two walks and five runs driven in. All 16 starting position players got at least one hit. Had Chicago won the game, Buckner would have made headlines with his 4-for-7 performance and 7 runs batted in. Kingman was 3-for-6 with 6 RBIs.

The two home-run sluggers in the contest did not shine afield. Schmidt made two errors at third for the Phillies, and Kingman made one in left field for the Cubs. Bowa summed up the experience as follows: “It was the wildest game I ever participated in. From a personal aspect, I was thinking late in the game, ‘My God, I’ve already got five hits, and we might end up losing.’”8 His manager, Ozark, said, “After this one, I guess we proved the National League can get by without using a designated hitter!”9

The other four National League games this day produced a total of 28 runs. The National League record for most runs overcome in winning a game was 11, set on April 17, 1976, by the Phillies against the Cubs in Chicago. Philadelphia also won that game in the 10th inning, 18-16, on Mike Schmidt’s fourth home run of the day, a three-run blast. On this day, the Cubs had erased a 12-run deficit, but still ended up one run short of victory.

This was the second time in history that the Cubs had allowed 23 runs to the Phillies. Fifty-seven years earlier, on August 25, 1922, the Phillies and Cubs played at Cubs Park in Chicago and combined to score 49 runs on 51 hits.10 That game still (as of 2016) held the record for most runs in a game by two teams.

10 In that game the Cubs scored 10 runs in the second inning and 14 runs in the fourth, but allowed 14 runs in the final two innings to barely hold on for the win. The Cubs hit three home runs; the Phillies had 20 singles. There were 21 walks and nine errors. For more information, read the SABR Games Project article about it.