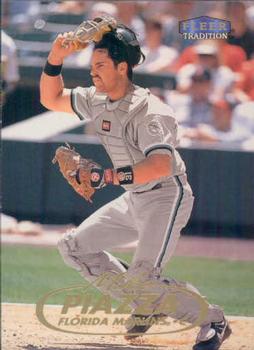 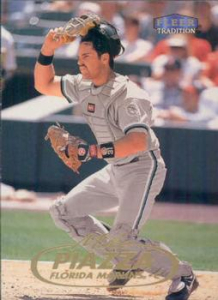 On the first full day of his Florida Marlins layover in May 1998, after the blockbuster deal that sent him from the Los Angeles Dodgers into an unknown future, Mike Piazza prepared for his first start with his new team. No one, from sportswriters to the Marlins to Piazza himself, believed the All-Star catcher making $8 million in the final year of his contract would remain with Florida a day beyond the 10 weeks between the trade from the Dodgers and the July 31 trading deadline.1

But Piazza insisted that he wouldn’t treat his time in black and teal as a stopover on his way to a big-market contender. “I don’t know what my situation will be [in the future], but I can honestly say while I am here I will give 150 percent to the Florida Marlins,” he said at his introductory press conference when he joined the team on May 16, in the middle of their series in St. Louis.2

After a pinch-hit sacrifice fly in his debut a day earlier, Piazza was in the starting lineup for the Sunday matinee, batting fourth as the Marlins faced St. Louis Cardinals left-hander Kent Mercker. St. Louis was Mercker’s fifth-major league team in an 18-season career that eventually took him to nine clubs.

Florida got to the 30-year-old hurler almost immediately. John Cangelosi popped out leading off the game, but Edgar Renteria walked on four pitches and Mark Kotsay singled through the hole between first and second, sending Renteria to third.

Piazza singled between third and shortstop, driving in Renteria with his second RBI in as many plate appearances with the Marlins. Florida led, 1-0.

Todd Zeile, who had come with Piazza in the trade that sent Gary Sheffield, Manuel Barrios, Bobby Bonilla, Jim Eisenreich, and Charles Johnson from Florida to LA, stepped up for his first at-bat with his new team and flied out to left. A strikeout by Derrek Lee ended the inning.

Chris Hammond – like Mercker a left-hander whose big-league career spanned many seasons (14) and organizations (seven) – got the ball for the Marlins, his third major-league start after beginning the season in Triple A. He retired the first two Cardinals before pitching around Mark McGwire and walking him on four pitches.

Cleanup hitter Brian Jordan, who had won the game the night before with a seventh-inning home run, connected again, giving St. Louis a 2-1 lead with his eighth homer of the season. On the next pitch, Hammond got Gary Gaetti to pop out to third for the final out.

Hammond’s two-out single was the only thing that kept Mercker from a perfect second inning, and Florida’s 32-year-old southpaw retired the Cardinals in order in the bottom of the frame.

The Marlins jumped on Mercker again in the third. Singles by Renteria and Kotsay put runners on first and second for Piazza – but he popped out to right field, not deep enough to advance the runners. After a Zeile fly out, Renteria stole third, and the 22-year-old Lee, who had joined the Marlins in another post-championship trade of a veteran star, the December 1997 deal sending pitcher Kevin Brown to the San Diego Padres, singled up the middle to tie the game, 2-2. John Wehner grounded out to end the inning.

Hammond struck out Mercker to start the bottom of the third, but Royce Clayton and Ray Lankford singled to put runners on the corners for McGwire. The big first baseman worked the count full, but Hammond caught him looking for the second out. Jordan and Gaetti then delivered consecutive two-out RBI singles, scoring Clayton and Lankford, for a 4-2 Cardinals lead.

Mercker pitched around a pair of two-out singles in the top of the fourth, and the Cardinals opened their half of the inning with base hits by Tom Pagnozzi and Delino DeShields. Mercker sacrificed them along, and Florida manager Jim Leyland ended Hammond’s day after 3⅓ innings.

Rob Stanifer, a 26-year-old right-hander, came out of the bullpen and walked Clayton on five pitches. With the bases loaded, Lankford doubled in two for a 6-2 lead, closing the book on Hammond.

Now with runners on second and third, McGwire grounded to third and Clayton broke for the plate on contact. Zeile threw to Piazza, who tagged Clayton for the second out. But Jordan delivered again, lining a two-out RBI single to center, scoring Lankford for a 7-2 lead.

Piazza led off the fifth, falling into an 0-and-2 hole before popping out to the shortstop. Zeile again flied out to left, and Lee grounded out for a one-two-three inning.

St. Louis continued to pour on runs, scoring for the third straight inning in the bottom of the fifth. Pagnozzi hit a one-out double ahead of DeShields, who slugged his first of seven home runs in 1998, extending the lead to 9-2.

Mercker retired the first two Marlins in the sixth, but Ryan Jackson, pinch-hitting for Stanifer, singled and Cangelosi doubled, putting runners on second and third. Renteria walked, and Kotsay’s single to center drove in Jackson and Cangelosi to cut the deficit to 9-4.

With Piazza due up and runners on second and third, John Frascatore relieved Mercker and got Piazza to line out to center, ending the threat.

“If [Piazza] gets a hit or you pitch him the wrong way and he hits one out of the ballpark, they’re right back in the game,” Frascatore said later. “That’s the last thing I want for Mercker.”3

Donn Pall pitched a scoreless sixth and seventh for Florida, hitting a batter and allowing two singles and a walk. Frascatore was even better, retiring the Marlins in order in the seventh and eighth for a perfect afternoon.

The Cardinals closed out the scoring in the bottom of the eighth. Left-hander Kirt Ojala came on to pitch for the Marlins and walked Lankford to start the inning. After McGwire popped out, Jordan doubled, putting runners on second and third. Gaetti was walked intentionally. Instead of hitting into a double play, John Mabry was hit by a pitch and St. Louis’s 10th run scored. Ojala struck out Pagnozzi on three pitches, but David Howard capped the Cardinals’ outburst with a bases-clearing triple for a 13-4 lead.

With Kent Bottenfield on the mound for St. Louis in the ninth, Renteria led off with a single and Kotsay flied out to left. Piazza came up for the fifth time. He popped out to the third baseman in foul territory, ending his first full Marlins game 1-for-5 with an RBI. Zeile made the final out of the game – a fielder’s choice to third base, with Renteria forced out at second – to wrap his Marlins debut at 0-for-5.

Hammond, who took the loss for Florida, was demoted to Triple A three days later with a 6.59 ERA in 13⅔ innings. He refused to report, instead asking for his release, which was granted.4 Once he was released, Hammond retired, preferring to spend time with his family on his ranch in Alabama and be with his wife, who was going through a difficult pregnancy.5 He remained out of professional baseball for three years, returning to action in the minors in 2001, then resurfacing in the majors with the Atlanta Braves in 2002 and pitching for four more teams through his age-40 season in 2006.

“I thought I’d had a five-hit game before,” the former NFL defensive back said. “But I guess that was football.”7

1 Five days later, on May 22, the Marlins traded Piazza to the New York Mets for Geoff Goetz, Preston Wilson, and Ed Yarnall.