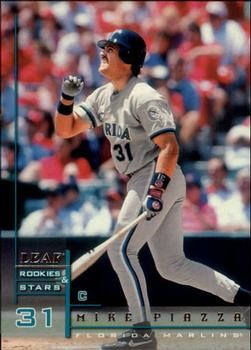 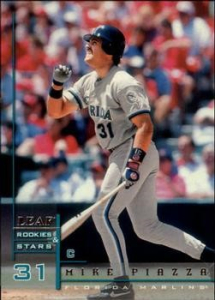 Home runs came frequently in Mike Piazza’s career, resulting in 399 homers as a catcher, a major-league record, and 427 homers overall. Triples were much rarer; in 16 big-league seasons, the lumbering Piazza had three separate droughts of at least 487 games without a three-base hit and wound up with a total of eight triples.

But there was a quirk in Piazza’s extra-base-hit distribution. He suited up for five teams on his way to the Hall of Fame: the Los Angeles Dodgers, Florida Marlins, New York Mets, San Diego Padres, and Oakland A’s. He slugged homers for only four of those clubs (all but the Marlins) but tripled in all five uniforms—including odds-defying three-baggers during his 126-game stint with the Padres in 2006, an 83-game appearance with the A’s in 2007, and a 5-game stop with the Marlins in 1998.

Piazza’s triple with the Marlins came in his third game with the team, in a sweltering, breezy Monday matinee in St. Louis. Florida was looking for a split of the four-game series to salvage an eight-game road trip in which they were 1-6 so far. St. Louis, which had gone 16-11 through the end of April, had started May with only three wins in its first 12 games, losing the series opener to Florida before winning the next two to climb back above .500 at 21-20.

The pitching matchup pitted two young Dominicans—and friends. St. Louis’s Manny Aybar, who had turned 26 two weeks earlier, was in his second big-league season. This was his first appearance with the Cardinals after an 8.46 ERA in five April starts led to a demotion to Triple A. Jesús Sánchez, a 23-year-old rookie obtained in a February 1998 trade that sent Al Leiter to the Mets, was making his sixth start for the Marlins, having posted a 3.65 ERA in 11 appearances overall.

“I’ve known him for seven years,” Aybar said of Sánchez. “He’s my friend. I knew when I first saw him he would be a very good pitcher.”1

Marlins shortstop Edgar Renteria, who had been feasting on Cardinals pitching all series, got things going with a one-out single off Aybar in the top of the first and stole second. Mark Kotsay’s 11th double of the season brought Renteria home for a 1-0 lead. Piazza’s first at-bat resulted in a fly out to deep center field, and Cliff Floyd grounded out to end the inning. Aybar got through the next two innings allowing just a walk in the second.

Sánchez faced four batters in each of his first three innings, working around one-out walks in the first and second and Royce Clayton’s two-out single in the third.

Piazza led off the top of the fourth with a single through the hole into left field, just his second Marlins hit in eight plate appearances. Floyd followed with an opposite-field single to left. Todd Zeile—the Marlins’ other acquisition along with Piazza in the swap that sent Gary Sheffield, Manuel Barrios, Bobby Bonilla, Jim Eisenreich, and Charles Johnson to the Dodgers on May 14—notched his first hit for Florida, a single to center that scored Piazza for a 2-0 lead.

Derrek Lee walked to load the bases, and Craig Counsell dropped a double into short left field, near the foul line, to score Floyd and Zeile and move Lee to third. Aybar fanned his friend Sánchez for the first out of the inning, but Todd Dunwoody lined a single to center to score Lee and increase the lead to 5-0.

Two days before this game, Mark McGwire had dented an advertisement in center field with a home run off Florida’s Liván Hernández, estimated at 545 feet, the longest in Busch Stadium history.2 Leading off the bottom of the fourth, McGwire turned on a 2-and-0 offering from Sánchez and sent it toward the sponsored Big Mac Land section in left field to get the Cardinals on the board. It was the 17th of his record-breaking 70 home runs in 1998. Estimates put the distance at 478 feet.3

“I didn’t think a human being could hit a ball that hard,” Piazza said. “You look up, and it looks like a golf ball coming off a driver. To have your ear two feet from his bat and hear that, it sounds like a cue ball.”4

Billiards wasn’t the only cross-sports reference Piazza made.

“It’s like Michael Jordan, people saying he’s the best basketball player who ever played the game,” he said after the game. “In my mind there’s no question you’re seeing the best power hitter in the history of the game.

“It’s hard to believe Babe Ruth could have hit them higher or longer than that. You see [McGwire] and it’s unbelievable where he hits them. It’s just unbelievable, to see a human being hit balls that far.”5

To his credit, Sánchez was unfazed, getting Brian Jordan, Gary Gaetti, and Ron Gant in succession to begin a run of nine Cardinals retired in a row to carry him through the sixth inning.

Piazza led off the top of the fifth against King, grounding out to the shortstop in a one-two-three inning. Florida came up empty again in the sixth against right-hander Juan Acevedo, who negated Clayton’s error on Lee’s leadoff grounder by picking the Florida first baseman off first.

In the top of the seventh, Renteria doubled with one out against St. Louis’s fourth pitcher of the day, right-hander Rich Croushore, and stole third. Kotsay walked to bring up Piazza. With three triples in 3,026 plate appearances in his career to this point—and only one since July 1993—Piazza drove a ball to deep left field, where it was destined to slam against the padded fence.

Had Gant, the Cardinals’ left fielder, played the carom off the wall, Piazza would’ve been held to a double, perhaps only one run scoring. But Gant leapt, his momentum carrying him into the wall, and the ball appeared to glance off his glove, deflect off the base of the wall, and roll into foul territory as Gant fell to the warning track. Renteria scored easily, Kotsay came around from first, and Piazza pulled into third with a stand-up triple and two RBIs for a 7-1 Marlins lead.6

That was enough Piazza speed for one afternoon, however. Floyd, the next batter, flied out to right field and Brian Jordan threw out Piazza at the plate for an inning-ending double play.

Jordan followed up his defensive highlight by doubling to lead off the bottom of the seventh and advanced to third on Gaetti’s fly out to center. Gant drove in the Cardinals’ second run with a groundout to third. After a walk, Sánchez struck out David Howard to complete seven innings.

The Marlins, despite two walks, did not score in the eighth, and Sánchez began the bottom half by allowing singles to Tom Lampkin (pinch-hitting for Croushore) and Clayton. After striking out Willie McGee, Sánchez was relieved by Jay Powell.

Charged with protecting a five-run lead with McGwire and Jordan due up, Powell was up to the task: McGwire flied out to right and Jordan popped out to first baseman McGwire in foul territory, the Marlins’ 7-2 lead intact.

Florida finally managed to cool off Jordan, who was named National League Player of the Week that day.7 From May 11 to 17, with the last three games in that stretch against the Marlins, Jordan hit .517/.533/.966, a 1.499 OPS on 15-for-29 hitting, with one walk and no strikeouts. He scored six runs; hit two doubles, a triple, and three home runs; and drove in 10 runs.

Cardinals closer Jeff Brantley came on to pitch the ninth, retiring the Marlins in order with Piazza flying out to right field for the third out. Powell stayed on for Florida in the ninth, working around a two-out, pinch-hit home run by Ray Lankford to finish off a 7-3 victory.

Sánchez improved to 3-1 after pitching 7⅓ innings, allowing two earned runs on five hits and three walks, with two strikeouts. He threw 94 pitches to 29 Cardinals batters. “I’d rather be catching him than trying to hit him,” Piazza said of his batterymate.8

“Sánchez did a great job,” Marlins manager Jim Leyland said. “That’s a tough club, top to bottom. There are no weak spots.”9

Piazza finished his second start for Florida 2-for-5 with a run scored, a triple, and two RBIs—and his first win, though that may not be what stood out to him when he looked back. “McGwire amazed me with another ridiculous blast and I did something even more incredible: hit a triple,” he wrote in his memoir. “We actually won. Afterward, headed home to Miami, we walked onto the bus for the airport and one of my young teammates got up to give me his seat. I didn’t know whether to feel flattered or old.”10