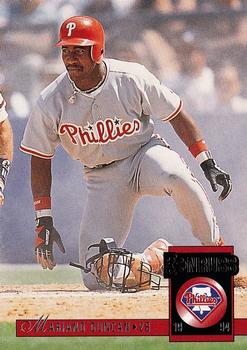 The San Diego Padres (7-18) and the defending National League champion Philadelphia Phillies (10-14) were both in last place in their divisions less than a month into the 1994 season when San Diego arrived in Philadelphia to open a three-game series on the first Monday in May. There may have been some lingering bad blood from a series on the West Coast eight days earlier. In the series finale at Jack Murphy Stadium on April 24, Phillies starter Curt Schilling had hit Tony Gwynn in the leg with a pitch in the first inning. Gwynn interpreted it as payback for what he described as a mistaken belief that he had been stealing signs the night before,1 not to mention that the HBP ended a string of six straight plate appearances with a hit by Gwynn.2

Nothing seemed amiss at the start of this series opener. Philadelphia left-hander Danny Jackson’s two first-inning strikeouts negated a two-out single by Derek Bell. In the bottom of the inning, San Diego right-hander Andy Ashby gave up a leadoff double to Lenny Dykstra, but stranded him and John Kruk (who walked with one out). Dykstra’s availability for this game wasn’t clear until he arrived at the ballpark that day. He’d suffered significant bruising in his back after slamming into the outfield wall attempting a diving catch the night before.3

After Jackson retired the side in order in the top of the second, Ashby again struggled against the Phillies. Wes Chamberlain was retired on a lineout to open the Phillies’ second, but Milt Thompson singled to center. Mickey Morandini walked, and Jackson sacrificed the runners to second and third. Dykstra opened the scoring by bringing both of them home with his second double in as many at-bats.

Up stepped Mariano Duncan, who was drilled near the left shoulder on a 1-and-1 count. Nothing came of the plunking; after a visit at home plate from the trainer and manager Jim Fregosi,4 Duncan took his place at first base and Kruk struck out to end the inning.

In the third, Jackson allowed a leadoff double to number-8 hitter Brad Ausmus. After Ashby bunted Ausmus to third, Bip Roberts’ groundout to shortstop plated the Padres catcher, cutting the Phillies’ lead to 2-1. After Gwynn singled, Bell struck out to end the frame.

Ashby again found himself pitching around baserunners in the bottom of the third but did not allow a run. Darren Daulton doubled with one out and Thompson was walked intentionally with two outs before Morandini grounded out to retire the side.

The Padres knotted the score in the top of the fourth, when Phil Plantier and Archi Cianfrocco opened with singles. Plantier scored when Dave Staton grounded into a 4-6-3 double play. Ricky Gutierrez grounded out to send it to the bottom of the fourth, tied 2-2.

After Jackson led off the bottom of the fourth with a groundout to shortstop, Dykstra hit his third consecutive double. From his lead off second base, he must’ve had a good view of Ashby’s first pitch to Duncan, who had to dive out of the way as the ball sped toward his chin. Visibly upset, Duncan took a few steps toward the mound, exchanging words with Ashby.5 Ausmus stepped in front of Duncan, saying, in Duncan’s retelling after the game, that Ashby wasn’t throwing at him on purpose.

Then the shoving started.

“I told him to move, I wanted to talk with Ashby, but he wouldn’t,” Duncan told reporters. “Then I threw a punch at [Ausmus].6

“He was throwing at me. He had hit me once. The second time was at my face. If I stay back and don’t say nothing, how will my teammates respect me?”7

The Phillies had Duncan’s back, streaming out of their dugout and bullpen; the Padres did likewise.

“I don’t think I’m a troublemaker,” Duncan added, “but you gotta do what you gotta do. I think he did it on purpose, no matter what he said.”8

Several scuffles ensued around the infield, with Pete Incaviglia going after Ausmus and Phillies pitcher Jeff Juden getting Ashby “in a Nolan-Ryan-slams-Robin Venture [sic] hog-tie near third base.”9 After about five minutes, the umpires broke up the kerfuffle and convened, ultimately ejecting Duncan, Incaviglia, Juden, and Ausmus.

When play resumed, Phil Clark replaced Ausmus behind the plate and Kim Batiste resumed Duncan’s at-bat with a 1-and-0 count. Dykstra immediately stole third base and, after Batiste flied out to center for the second out of the inning, scored on Clark’s passed ball. Through four innings, Philadelphia led, 3-2.

Jackson retired the Padres in order in the top of the fifth, and the Phillies got him another run in the bottom half when Dave Hollins singled and stole second, and Thompson was intentionally walked with two outs. Morandini lined a double into the left-center-field gap, scoring both runners for a 5-2 advantage. The Philly Phanatic was loving every minute, dancing to War’s “Why Can’t We Be Friends?” in front of “an unmoved Padres bench.”10

Gwynn led off the sixth with a single, but Jackson retired the next three Padres. In the bottom of the sixth, Dykstra led off with a walk, stole second and advanced to third when Batiste reached on an error by shortstop Gutierrez. After Kruk struck out, Hollins hit a sacrifice fly to right field to score Dykstra, an unearned run that made it 6-2.

Jackson struck out two in a perfect seventh, and the Padres replaced Ashby with Donnie Elliott. The right-handed reliever walked Morandini with one out and Dykstra intentionally with two away but stranded both runners.

In the top of the eighth, Jackson got to a full count on the first two batters, Ray Holbert and Luis Lopez, but retired both in another perfect inning. He’d now sent down nine in a row going back to Gwynn’s single in the sixth. In the bottom of the eighth, Hollins doubled with one out before Jim Eisenreich’s two-out single made it 7-2, Phillies.

Jackson, having thrown 118 pitches through eight innings, came out for the ninth and had his most effective inning all night. Bell flied out on the first pitch, Plantier struck out on three pitches, and Cianfrocco hit the first pitch for a game-ending groundout. Having retired the final 12 Padres he faced, Jackson’s line in the complete-game victory read: six hits, two runs (both earned), no walks and nine strikeouts. Dykstra finished 3-for-3 with two walks, two runs, two RBIs, three doubles and two stolen bases.

But if the Phillies thought the brawl would be the spark they needed to turn around their season, it didn’t manifest itself in the results. They lost the next four and seven of their next eight, falling from 4½ games out of first place in the NL East to 9½ back. They never made it higher than third place, finishing 54-61 in fourth—20½ games behind the first-place Expos—when the players strike ended the season after August 11.

For all the years my dad spent serving on my hometown’s Board of Education, the one direct perk I got out of it was when the principal at my New Jersey middle school called one afternoon with an offer for the two of us to join him at that night’s Padres-Phillies game at Veterans Stadium. We’re a family of Mets fans, but considering my deep love of baseball, Dad accepted. Our seats were in the seventh row, just left of home plate toward the third-base visitors’ dugout, still some of the best seats I’ve ever had for a major-league game. I’m glad I brought my camera. 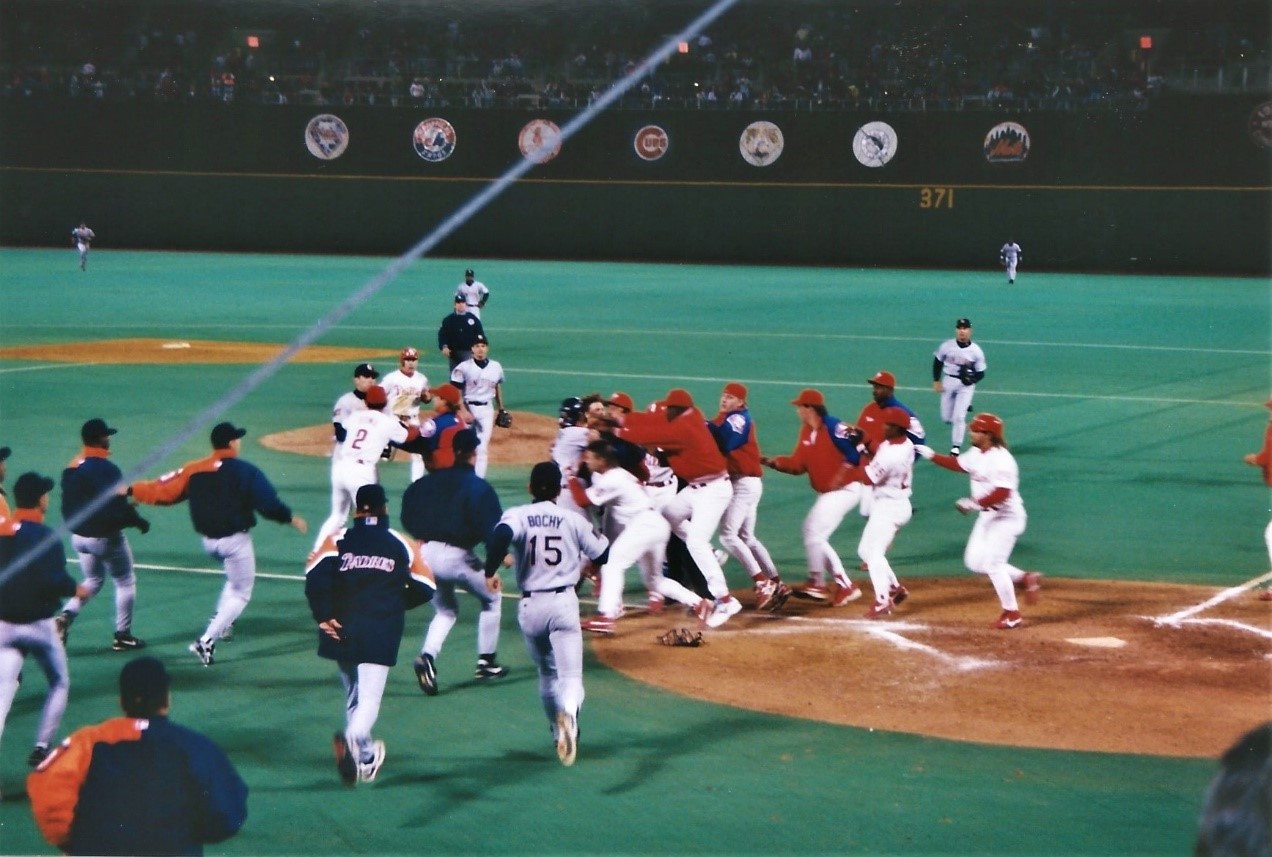 2 An Associated Press report of the game (“Dykstra Forgets His Bad Back, Powers Phillies Past Padres,” Asbury Park Press, May 3, 1994: D4) said that the HBP came “after Gwynn had eight straight hits Friday and Saturday,” but a review of the play-by-play for all three games of the series on Baseball-Reference.com shows that the HBP came after six consecutive hits and was followed by two more.

6 “Dykstra Forgets His Bad Back, Powers Phillies Past Padres.”

10 Briggs. The song “Why Can’t We Be Friends?” written and performed by the band War, peaked at number 6 on Billboard magazine’s Hot 100 singles chart for the week ending August 29, 1975.