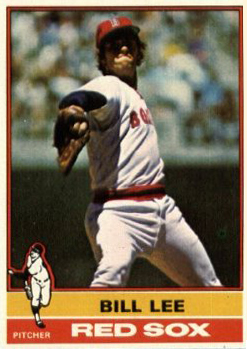 Among MLB’s storied rivalries, none has been more heated than that of the Boston Red Sox and New York Yankees. The stakes do not have to be high – though they often have been – for bad blood to boil over between the two teams. One of the most vicious brawls between the two franchises occurred on May 20, 1976, in the opening game of a four-game series at Yankee Stadium between the defending AL-champion Red Sox and the front-running Yankees, who would supplant Boston as the AL-pennant winners that year. Though the Bosox prevailed on this day, the outcome of the rhubarb between the two clubs was far more costly to them than their 8-2 victory was beneficial.

Renowned Yankees-hater and Yankees-killer Bill “Spaceman” Lee took the mound for Boston on May 20 and engaged in a pitchers’ duel with Ed Figueroa. In the bottom of the fourth inning, Thurman Munson and Chris Chambliss led off with singles, and Munson scored to give the Yankees a 1-0 lead when Red Sox shortstop Rick Burleson committed his second error of the game with an errant throw of a Lou Piniella grounder. No further runs would be scored until the seventh, but the most important action in the game took place before then.

The sixth inning proved to be the fateful one when, in the bottom of the frame, the Yankees once more had runners on first and second after two-out singles by Piniella and Graig Nettles. Otto Velez then singled to right field, and Piniella tried to score from second base. Boston right-fielder Dwight Evans threw a strike to catcher Carlton Fisk who was bowled over by Piniella but held on to the ball for the out. The feisty Fisk was unhappy about being steamrolled and was still tangled up with Piniella, so he took the swing that started the brawl.

Lee was one of the first players to rush toward home plate, but the burly Nettles picked him up and slammed him to the ground, where the left-hander landed awkwardly on his pitching shoulder. As he was on his side, Yankees center-fielder Mickey Rivers gave him a couple of punches to the back for good measure. After things had calmed down, Lee got up and was holding his left shoulder, a sign of the torn shoulder ligament that sidelined him for much of the rest of the season.

“Spaceman” was not only injured but was also angry, and he reignited the fight by walking around several players to confront Nettles, who then hit Lee with a punch that gave him a black eye. With the melee in full force again, Rivers hit every Red Sox player he could reach in the backs of their heads until order was finally restored. Once the dust had settled, only Nettles and the injured Lee were ejected by home plate umpire Terry Cooney.

When play resumed, Rick Burleson atoned for his earlier errors with a two-run homer off Figueroa in the seventh that gave the now riled-up Red Sox a 2-1 advantage. The lead was short-lived, however, as Rivers registered a shot of a different kind off reliever Reggie Cleveland – a single to right field in the bottom of the frame – that scored Sandy Alomar, who had singled and had stolen second.

The Red Sox kept the pressure on the Yankees in the eighth when, after Figueroa walked Fisk to start the inning, Carl Yastrzemski greeted reliever Tippy Martinez with a two-run homer that gave Boston a permanent lead. Yaz added a second two-run blast in the final inning as the Sox battered Ron Guidry for four additional runs to take the final margin of victory to 8-2.

After Tom House set the Yankees down in order in the bottom of the ninth for his second save of the season, attention returned to the sixth-inning fracas. Yastrzemski said, “Until the fight, we were too complacent. That seemed to shake us up. And just in time, too.”1 While the victory may have been sweet, it cost the Red Sox a pitcher who had won 17 games in each of the previous three seasons.

The bad blood between Lee and Nettles apparently harkened back to comments made after a brawl between the two teams in an August 1, 1973, game. In that game, it was Thurman Munson who bowled over Fisk at home plate and sparked a brawl between the two catchers and Yankees shortstop Gene Michael. Fisk came out of the melee with a scratch on his face that caused Lee to ask him, “Did Michael scratch you with his purse?”2 Lee continued to antagonize the New Yorkers as he persisted with this theme and stated that all of the Yankees were “like a bunch of hookers, swinging their purses.”3

On the day of the Lee-versus Nettles fracas, when Nettles was informed of the extent of Lee’s shoulder injury after the game, he said he was sorry that Lee would be sidelined for a time. When it came to the black eye he gave Lee, however, Nettles showed no such remorse as he later said, “He just tried to sneak around the pile and he came at me, getting in my face, so, again, I wanted to make sure he wasn’t hit with any purse.”4 His comment showed how long players’ memories are in intense rivalries like the one between Boston and New York. The May 20, 1976, fight between the two teams was obviously not the first, and it certainly would not be the last.