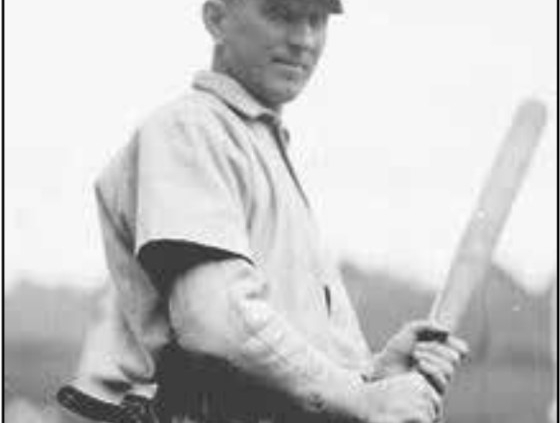 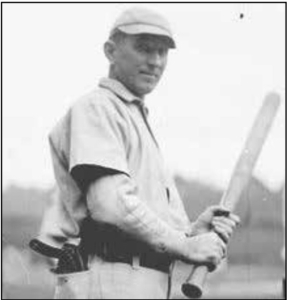 The newly-minted American League was barely a month old on May 23, 1901, when the Cleveland Blues rallied for one of the greatest ninth-inning comebacks in baseball history.

Cleveland’s previous major-league team, the National League Spiders, had achieved ignominy two years earlier, in 1899, when they infamously lost 134 games, a record that may never be broken. When the National League reduced its roster of franchises from 12 to eight in 1900, the Cleveland team was, not surprisingly, one of the four teams that were disbanded.

A minor-league version of the American League was born in 1900 and Cleveland, with a completely revamped roster of players, was awarded one of the eight franchises. When American League President Ban Johnson declared the AL a major league in 1901 (major league because the league added franchises in the “major” cities of Baltimore, Boston, Philadelphia, and Washington), the Cleveland franchise was one of the four retained from the 1900 minor-league version. (Chicago, Detroit, and Milwaukee were the others.)1 This time, though, a handful of the hometown players stayed in Cleveland, most notably veteran first baseman Candy LaChance, right fielder Ollie Pickering, and pitcher Bill Hoffer.

The 1901 Cleveland team came to be known as the Blues because of their all-blue uniforms,2 and they played their games in League Park, the same wooden ballpark in which the Spiders had played.3 The ballpark was at the northeast corner of what was then Lexington and Dunham Streets (now Lexington and East 66th Street) in Cleveland’s Hough neighborhood. It had a capacity of about 9,000.4

The start of the Blues’ season was bleak, as the team endured an 11-game losing streak in mid-May that resulted in their dropping into last place. By the time the Washington Senators came to Cleveland for their first visit of the season, the Blues had lost 18 of their first 24 games. Washington, meanwhile, had opened the season well, winning 12 of its first 19 and sitting comfortably in the first division.

In their first meeting, on Wednesday, May 22, the Blues surprised the Senators, grabbing a 6-4 lead midway through the game and holding on for a 6-5 victory.5

Starting pitcher Hoffer, who had been the ace pitcher of the famous NL champion Baltimore Orioles of the mid-1890s (winning 78 games over a three-year span),7 but then faded into relative obscurity, had been pounded by the Washington batters, giving up 14 hits in his nine innings on the mound. Seemingly set up to add insult to injury, Hoffer led off the bottom of the ninth. The few remaining fans could be heard making such sarcastic remarks as “Hit her out, Hoffer, and run around nine times – then you’ll win.”8 Continuing his miserable day, Hoffer struck out.

Leadoff hitter Pickering was next. Although he is now unknown by most fans, Pickering actually had quite a few claims to baseball fame. He was the starting center fielder for the NL Louisville Colonels for the first half of the 1897 season, but on July 19 of that season he sat on the bench to make room for the major-league debut of all-time great Honus Wagner.9 Pickering never again played center field for the Colonels and was sold to the minor-league Syracuse team two weeks later.10

Another claim to fame of Pickering’s is that a month before this game against Washington, back on April 24, in the American League’s first-ever game, when Cleveland visited Chicago to play the White Sox, Pickering was the first batter in American League history. (He flied out to center field.)11

And finally, Pickering is credited with making famous the Texas Leaguer-type hit, back in his debut with Houston in the Texas League in 1892.12 Pickering’s career in baseball spanned 30 years, from his debut as a player in 1892 until his last year as a manager in 1922.

Pickering followed Hoffer by grounding to Washington second baseman Joe Quinn for the second out.

With only one out remaining before the Blues would be put out of their misery, veteran left fielder Jack McCarthy came to the plate for Cleveland. McCarthy had been the starting left fielder the previous season for the NL’s Chicago Orphans and for the Pittsburgh Pirates in the 1898 and 1899 seasons, as well. McCarthy hit a clean single to right field. “The spectators were offended. It seemed like a useless delay.”13

Up-and-coming 23-year-old third baseman Bill Bradley, who like McCarthy had also played for the Orphans the previous year (and would end up playing more than 1,000 games for the Cleveland franchise), then got another hit.

Next up was cleanup hitter LaChance, who had begun his major-league career nearly a decade earlier, in 1893 with the Brooklyn Bridegrooms. He swung and missed on Senators left-handed pitcher Casey Patten’s first pitch, then missed the second one, too. Down to his last strike, LaChance pounded a single to deep left, scoring McCarthy and Bradley to make the score 13-7. Thirty-five-year-old catcher Bob Wood, who had previously played for Ohio’s other major-league team, the Cincinnati Reds, was then plunked by a tiring Patten.

Shortstop Frank Scheibeck, at 5-feet-7 and 145 pounds the shortest and lightest of Cleveland’s players, was next in the order. Scheibeck had begun his major-league career with the old American Association version of the Cleveland Blues, way back in their inaugural 1887 season. The 36-year-old journeyman, whose career batting average was only .235, came through, though, when he doubled off Patten to drive in a couple more runs, cutting the deficit to four runs, 13-9.

Center fielder Frank Genins, then 34 and playing his last season of major-league ball (but who would continue to play minor-league ball into his early 40s) followed with a sharp single, sending Scheibeck home: 13-10. “The crowd became frantic. Hats and coats were thrown up in the air, and the Cleveland players were dancing all around the field. LaChance, working like a Trojan on the coaching lines, kept the crowd yelling so as to rattle the pitchers.”14

Washington’s manager, Jim Manning (who would never manage in the major leagues again after the 1901 season), told his team captain, Bill Everitt, former star infielder of Cap Anson’s Chicago team, to remove Patten from the game. Everitt told right-handed veteran Win Mercer to take Patten’s place, “but Mercer would not go in, claiming that he had not warmed up.”15 Young southpaw Watty Lee, who along with manager Manning, pitcher Patten, and half a dozen other Washington players had moved from the 1900 AL Kansas City franchise to the 1901 Senators, was called on instead.

The first batter Lee faced was Blues second baseman Truck Eagan. Eagan had been signed only a week earlier, after Pittsburgh released him two weeks into the season.16  Eagan would then be released by the Blues a week later, terminating his major-league career with a total of only nine games played. (He did play in the California minor leagues for another decade, though.) Lee walked Eagan on four pitches to put men on first and second and bring the tying run to the plate.

With pitcher Hoffer scheduled to bat again, Cleveland’s manager, Jimmy McAleer, who began playing professionally in 1883, including a decade for the local Cleveland major-league teams in the National League and the Players’ League, and had also been the manager of the 1900 Cleveland Blues, didn’t hesitate for a second to pinch-hit for his beleaguered pitcher.

Young Erve Beck, who would play only one more season in the major leagues, was called off the bench and smashed a hit so close to the left-field fence that Senators left fielder Pop Foster, “who stood on his tip toes to reach for it, but could only touch the ball,”17 could not catch it and Beck ended up on second base with a double, having driven in two more runs to cut the lead to one, 13-12.

Pickering came to bat again and was hoping he would fare better than he had so far, having made outs in each of his first five plate appearances against Patten. This time, though, he was facing Lee, and he hit a clean single just outside of shortstop Billy Clingman’s reach, scoring Beck from second, tying the game at 13 runs apiece.

“By this time the audience gave a life-sized picture of pandemonium let out for recess. A crowd of Indians on a red-hot warpath could not have been more demonstrative. They roared, they jumped, they shouted. They threw everything within reach in the air. Hats, umbrellas, canes, cushions went up as if a cyclone had struck that part of the landscape. They rushed on the field and came close to losing the game for Cleveland by forfeit.”18

It took a few minutes to clear the field, then the game resumed, with McCarthy coming to bat once again. Lee’s first pitch to McCarthy passed right by catcher Mike Grady, allowing Pickering to take second base. McCarthy then lined a clean single to left, allowing Pickering to race home ahead of Foster’s throw with the unlikeliest of winning runs. The “crowd rushed onto the diamond”19 and the “Cleveland players were carried to their dressing rooms by the jubilant crowd.”20

The Cleveland Press began its report of this “remarkable”21 game by quoting “from the proverbs of ‘Rube’ Waddell: ‘A game of base ball hain’t ever over until it is over. Don’t ever forgit this.’”22 (So it appears that Yogi Berra wasn’t the one who coined this phrase!)

Both the Cleveland Leader and the Washington Times referred to the Blues’ great comeback win as a “Garrison finish,”23 a reference to nineteenth-century jockey Edward “Snapper” Garrison, known for his spectacular come-from-behind horse-racing wins.24 The Leader called it “the greatest contest ever witnessed in this city.”25

The Cleveland Plain Dealer said that the Blues’ “sensational finish”26 was like Sheridan arriving from Winchester, “a case of hopeless defeat turned into glorious victory.”27 This was a reference to the Civil War battle of Cedar Creek in the Shenandoah Valley, when Union Army Colonel (later promoted to general) Phil Sheridan dramatically returned from Winchester to rally his troops to defeat General Jubal Early’s Confederate army on October 19, 1864.28

All of these descriptions were apt, as being down by eight runs with the bases empty and two outs in the bottom of the ninth inning, the probability of Cleveland winning the game was 0.0332 percent, the second most unlikely comeback in modern baseball history.29

In addition to the sources cited in the Notes, the author consulted Baseball-Reference.com and Restrosheet.org.