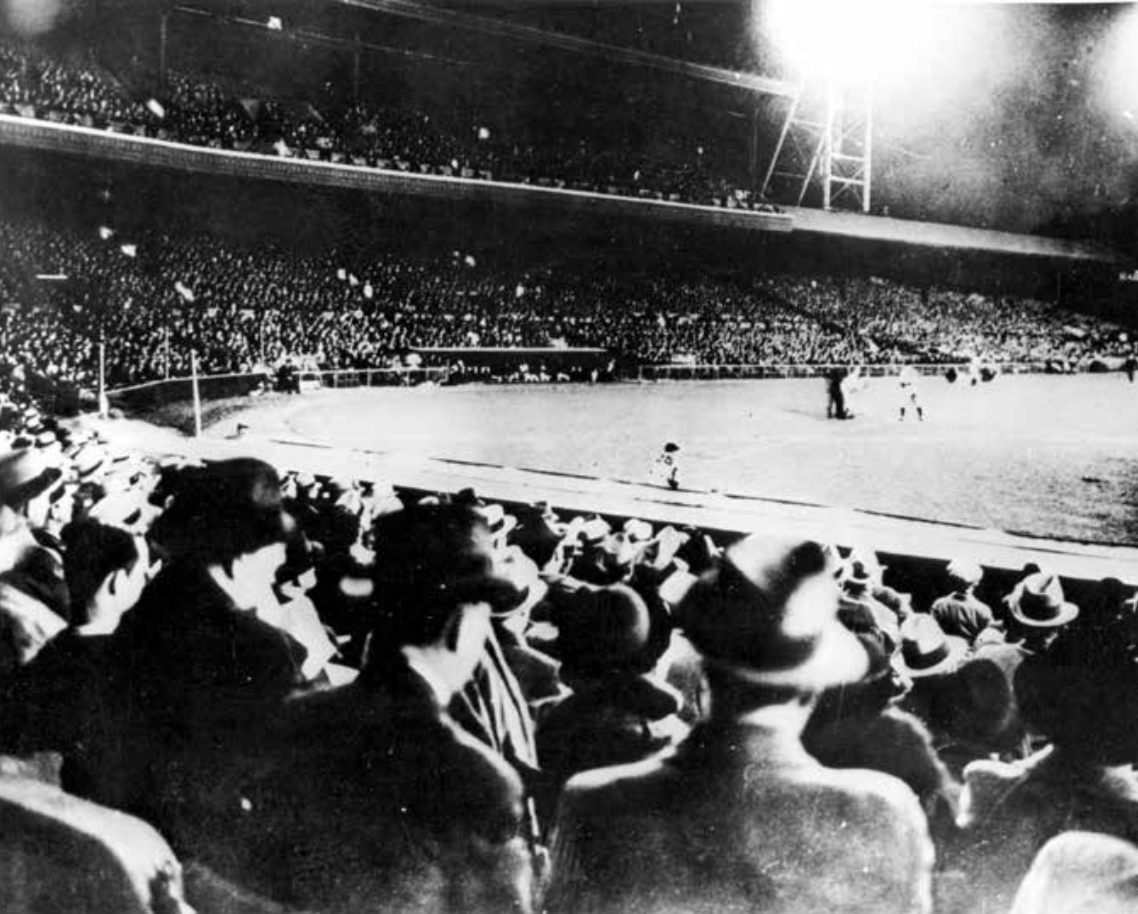 Many baseball fans consider Branch Rickey the greatest innovator in baseball history. Not only did he break baseball’s color barrier by bringing Jackie Robinson to the majors, he also invented the farm system, which has become the standard means teams use to develop talent. Another great innovator who deserves credit for the changes he brought to the game was a heavy-drinking, brawling genius named Larry MacPhail, who drank and fought as often as Rickey went to church.

“Cold sober he was brilliant,” said Leo Durocher, who managed under MacPhail at Brooklyn. “One drink and he was even more brilliant. Two drinks — that’s another story.”1

As general manager of the Cincinnati Reds in the 1930s, MacPhail brought the legendary Red Barber in to broadcast Reds games at a time when most owners felt that broadcasting games on radio would keep fans away from the ballpark. He also made the Reds the first team to travel by air. And on May 24, 1935, he introduced night baseball to the major leagues when the Reds defeated the Philadelphia Phillies, 2-1, before 20,422 fans at Crosley Field.

Night baseball was not new. The first recorded night game was played between competing teams from two Boston department stores at Hull, Massachusetts, on September 2, 1880, and the first night game in Organized Baseball was played in Independence, Kansas, on April 28, 1930, between the Independence Producers and Muskogee Chiefs of the Western Association.2 Negro Leagues teams had been playing under the lights throughout the 1930s, as well. Yet no National League or American League game had ever been played under the stars until MacPhail’s Reds took the plunge.

National League teams had voted at the previous winter meetings to allow night games, although they restricted teams to no more than seven per season, lest the novelty wear off. Because MacPhail was familiar with baseball after dark from his days with the Columbus Red Birds of the Double-A American Association, he was willing to try it in Cincinnati as a way to bring in fans when the game by itself wasn’t enough of an attraction.

The Reds weren’t much better, finishing sixth with a 68-85 mark. They scored fewer runs than the Phillies (646) and had only a slightly better team ERA (4.30). The Reds actually had four future Hall of Famers on their roster: Jim Bottomley, Kiki Cuyler, Chick Hafey, and Ernie Lombardi, but only Lombardi was still in his prime. The others were on the downside of their careers and didn’t contribute much to the team.3

The Reds started their best pitcher, Paul Derringer. He was 4-2 going into the game and went on to have an excellent 22-13 season with a 3.51 ERA for a bad ballclub. Not that the Phillies had much choice, but they started a journeyman, Joe Bowman. Bowman was 0-2 at game time — both losses came in relief — and finished 7-10 with a 4.25 ERA.

This being a historic game, it of course was preceded by pomp and circumstance. “Fireworks in profusion, music by two large bands, bombs which shook when they went skyward from against the center-field fence and the rat-a-tat-tat of four American Legion Drum Corps as they massed on the infield after lowering the ballpark’s flags were among the pre-game highlights,” wrote the Philadelphia Inquirer.4

After the ceremonies, with the pregame warmups done and the sun set, President Franklin Roosevelt pushed a button at the White House and suddenly Crosley Field was illuminated with more than one million watts of light. National League President Ford Frick threw out the ceremonial first pitch and the game was under way.

Philadelphia got its only run of the game in the fifth, when Al Todd led off with a single. After Watkins popped out, Mickey Haslin hit another single that moved Todd to third. Bowman then helped his own cause when he grounded to short. Myers forced Haslin at second, but threw low and wide to first. Bowman was safe on the fielder’s choice, and Todd scored.

Only a great and gutsy play prevented the Phillies from tying the game in the sixth. With one out and Johnny Moore on first, Dolph Camilli smashed a drive to deep center field. Moore was off with the pitch, and had reached third when the Reds’ Samuel Byrd (later to make a name for himself as a pro golfer known as Sammy Byrd) made an amazing catch before crashing into the (unpadded) outfield wall. Moore barely beat the relay to first.

From that point on the two teams traded outs. Derringer went all the way for his fifth win of the year, while Jim Bivin pitched a perfect eighth in relief of Bowman. The game was completed in 1 hour 35 minutes.

The reviews of the game and the lights would have made any Broadway actor smile. “With more than 20,000 in attendance, the two teams put on a combat which was one of the highlights of the early season,” wrote Jack Ryder in the Cincinnati Enquirer. “Unaffected by the artificial illumination, which covered the field in a manner perfectly satisfactory to the athletes, both teams played errorless ball, each executing some really brilliant plays.”5

Bowman also got boffo notices for his work. “Joe Bowman pitched himself into a starting berth on Jimmie Wilson’s Quaker hurling staff here tonight even though he failed to win when given his first opportunity to open a game for the Phillies,” wrote the Inquirer.6

Bowman did get 16 additional starts that season among his 33 overall appearances. After losing his next start on June 23 to go 0-4, he went a respectable 7-6 the remainder of the season.

As successful as the game was, MacPhail and Reds owner Powel Crosley saw night games only as a novelty to attract fans and a poor cousin to daytime baseball. “The proposition [of night baseball] was purely a financial one, as President Crosley and Mr. MacPhail admitted from the start,” wrote the Cincinnati Enquirer. “Both of these officials believe, and do not hesitate to say, that the game is better when played in sunlight and they do not favor increasing the number of night games above the current limit of seven.”7

The other National League teams had adopted a wait-and-see attitude about night baseball, and weren’t quick to hop on the bandwagon. The Brooklyn Dodgers were the second team to install lights, and that was only three years later. Cincinnati supplied the opposition the night of June 15, 1938, at venerable Ebbets Field for what became one of the most historic contests in baseball history. Not only did it inaugurate baseball under the stars in Flatbush, it was also the game in which Reds pitcher Johnny Vander Meer pitched the second of his two consecutive no-hitters.