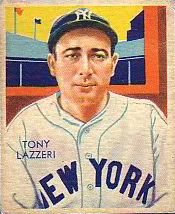 Approximately 8,000 fans paid to enter Shibe Park on Sunday, May 24, 1936, to see the seventh-place Philadelphia Athletics take on the first-place New York Yankees. George Turbeville took the mound for Philadelphia against the Yankees’ Monte Pearson.

The Athletics scored the first two runs of the game, in the bottom half of the first inning and then were shut out for the rest of the game. New York did the rest, hammering out 19 hits, taking advantage of 16 bases on balls, and scoring 25 runs. The Yankees scored five times in the second and fourth innings and six times in the fifth and eighth innings, adding one run in the sixth and two in the seventh for good measure. The opening sentence of the New York Times’ account of the game the next day summed up the story: “Tony Lazzeri hammered his way to baseball fame today with an exhibition of batting unparalleled in American League history as he set the pace in the Yankees’ crushing 25-2 victory over the Athletics at Shibe Park.”1

Lazzeri’s line in the box score showed a career day: 5 at-bats, 4 runs, 4 hits, 2 putouts, 1 assist, 0 errors. What had to be read under the line scores shows that Lazzeri had a triple and three home runs and he knocked in 11 runs. And he was batting eighth. He bested Jimmie Foxx’s previous American League mark of 9 RBIs in a single game. Foxx set that record in 1933 with a double, triple, and home run. The National League record of 12 RBIs in a game was set by St. Louis Cardinals first baseman Jim Bottomley on September 16, 1924. Another Cardinal, Mark Whiten, tied the NL record by knocking in 12 runs on September 7, 1993. Lazzeri’s AL record still stood as of 2014.

Lazzeri’s Yankee teammates also enjoyed batting success at the hands of the A’s hurlers. Joe DiMaggio went 3-for-7, raising his batting average to .396 after 36 games. He had a single, double, and home run with 3 RBIs. DiMaggio was the only New York starter who did not draw a walk. Center fielder Ben Chapman, the Yankees’ leadoff batter, had a perfect day at the plate, 2-for-2 (both doubles) and five walks, with four runs scored. He reached base in all seven plate appearances. Catcher Bill Dickey had two triples and a walk, and leadoff hitter Frankie Crosetti had two home runs to go with a walk. First baseman Lou Gehrig went 2-for-4 with two walks, giving the quartet of Gehrig, Chapman, Dickey, and Crosetti a rare team double cycle, as each player collected two hits of one type needed to hit for the cycle.

The A’s used five pitchers – George Turbeville, Bill Dietrich, Red Bullock, Herman Fink, and Woody Upchurch. They allowed 5, 5, 5, 2, and 8 runs, respectively. Philadelphia starter Turbeville allowed only one hit in 1? innings, but his five free passes contributed to five earned runs allowed. That one hit was a second-inning grand slam by Lazzeri. Dietrich faced 19 batters in his 2? innings. Bullock faced six batters and retired only one; Fink faced two and retired both. When Upchurch was handed the ball to start the sixth inning, A’s manager Connie Mack must have told him he would finish the game. His ERA after pitching four innings and giving up eight runs on eight hits, with two walks and four home runs, ballooned to 9.67. All of New York’s 25 runs were earned. The nine-inning contest lasted 2 hours and 34 minutes.

Lazzeri hit a second grand slam in the fifth inning, and he added his third home run in the seventh, giving him two consecutive home runs. New York Times writer James P. Dawson wrote, “He missed a fourth by a matter of inches and had to be content with a triple.”2

With two grand slams in one game Lazzeri “created” a new baseball record; he was the first major leaguer to accomplish the feat. His former teammate Babe Ruth had hit grand slams in consecutive games twice (in 1927 and 1929), but Ruth had never done it in one game. The day before this display of power, on May 23, Lazzeri had hit three home runs in a doubleheader against Philadelphia (in 12-6 and 15-1 victories for the Yankees). And he had gone deep on May 21 against the Detroit Tigers, giving him seven home runs in four games. The Yankees had scored 52 runs in the first three games played against the Athletics. They had 107 total bases and 49 hits. The 16 walks allowed by the five Philadelphia pitchers on May 24 was two short of the all-time mark of 18 allowed in a single game. On this historic day for Lazzeri, the New Yorkers hit six home runs. They had hit five in the second game of the previous day’s doubleheader, for a two-game total of 11 home runs. Dawson also wrote that “Lazzeri was almost mobbed when his triple gave him a new American League mark for runs batted in and at the conclusion of the game he had to fight his way through a cluster of autograph seekers, without police aid by the way.”3

Against the quintet of Philadelphia pitchers in this game, the Yankees scored in six different innings and left nine men on base. Third baseman Red Rolfe went hitless, the only New York starter without a hit. Even pitcher Monte Pearson had three singles in five at-bats. Pearson struck out three, allowed seven hits and two walks, pitching a complete game and earning his sixth win of the season.

Tony Lazzeri was 32 years old when he bashed his way into the record books, in his 11th season as a Yankee. He would finish the season with only 14 home runs, meaning he had hit seven in four consecutive games and seven in 146 other games. The future Hall of Famer became the first player to hit two grand slams in one game. Since then, only 12 other players have accomplished the feat (as of 2014).