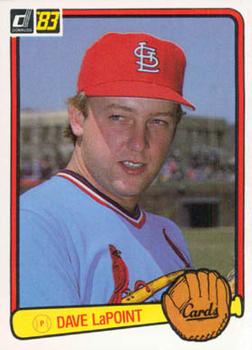 When Dave LaPoint of the St. Louis Cardinals walked to the pitcher’s mound at Riverfront Stadium in Cincinnati on May 24, 1983, to make the 35th start of his major-league career, the left-hander had yet to walk off any mound with a complete game.

Against the Reds, LaPoint finally finished something he started, going the distance in a 7-1 Cardinals victory. He improved his record to 3-1 and lowered his ERA to a snappy 2.10 after scattering eight hits and two walks with four strikeouts.

“It seems like the last complete game I had was in Little League,” quipped LaPoint, who actually had nine of them in 1981 with the Cardinals’ Triple-A farm club in Springfield, Illinois. “I was trying to make the Hall of Fame. I thought I had a chance for the record. If I went through this year without a complete game, I was going to look it up.”1

LaPoint worked three perfect innings — the second, sixth, and seventh — and limited the Reds to one hit in nine at-bats with runners in scoring position. He coaxed double-play groundouts in the second and fifth. Cincinnati scored its lone run in the fourth when Ron Oester singled in Dave Concepcion, who had walked and advanced to second on one of LaPoint’s two wild pitches. In the ninth, after striking out Johnny Bench and Paul Householder, LaPoint surrendered singles to Oester and Kelly Paris.

“If they’d gotten another hit, I would almost have had to make a change,” said Cardinals manager Whitey Herzog,2 who had closer Bruce Sutter readying in the bullpen.

“I couldn’t believe he was warming up anybody when it was 7-1,” LaPoint said. “It gave me a little more incentive. I said, ‘He’s not going to get in here.’”3

LaPoint sealed the deal by getting Dann Bilardello, who had two hits, to pop out to catcher Darrell Porter in foul territory. After “saying three Hail Marys” while waiting for the ball to be caught, LaPoint dropped to the mound in a mock faint.4

The Cardinals provided LaPoint plenty of offense, rapping out 13 hits against three Reds pitchers, Bruce Berenyi, Frank Pastore, and Rich Gale. LaPoint scored the game’s first run in the third inning when he walked, moved around to third as Tommy Herr and Ken Oberkfell walked, and ambled home on a bases-loaded single by Lonnie Smith. LaPoint’s sacrifice in the fourth preceded an RBI single by Herr that plated Ozzie Smith to make it 3-0. St. Louis led 3-1 after five and methodically broke things open with one run in the sixth, two in the seventh, and one in the ninth. Willie McGee had three hits for the Cardinals, while George Hendrick drove in two runs.

Despite officially not going the distance previously, LaPoint did pitch nine innings against the Montreal Expos at Busch Stadium on May 14, but the game went extra innings (the Cardinals won 3-2 in 11), so it was not a complete game.

The triumph over the Reds snapped a four-game losing streak for the Cardinals (20-16) and moved the defending World Series champions into sole possession of first place in the National League East Division, a half-game ahead of the Expos. LaPoint, whose repertoire featured a nifty changeup, was thriving, allowing two or fewer earned runs in eight of his nine starts while averaging seven innings per outing.

“He’s got a chance to be one superb major-league pitcher because of his changeup,” Porter said after the game against Montreal. “Not that he doesn’t have anything else. He’s got a good slider and a decent fastball, but his changeup is the equalizer. It throws everybody off.”5

For the moment, the 23-year-old boasted a 14-4 career record. The Cardinals were 24-8 in games he started since being acquired from the Milwaukee Brewers on December 12, 1980, along with outfielder Sixto Lezcano, pitcher Lary Sorensen, and minor-league outfielder David Green for pitchers Rollie Fingers and Pete Vuckovich and catcher Ted Simmons. LaPoint became an integral member of the St. Louis staff in 1982, going 9-3 with a 3.42 ERA. He was the winning pitcher in the NL East title-clinching game on September 27 in Montreal.

After his May 24 complete game, the remainder of the 1983 season was a roller-coaster ride for LaPoint, who lost four of five decisions in June and won four of five in July. A 2-0 victory over the Houston Astros on August 19, in which he pitched 8⅔ scoreless innings, gave LaPoint an 11-8 record, but he spent much of September in the bullpen. He finished with a 12-9 record and a 3.95 ERA, sharing the team lead in wins with fellow youngster John Stuper.

LaPoint’s next complete game came a year later, June 3, 1984 — a six-hit, 1-0, shutout of the New York Mets at Shea Stadium — and he totaled 11 over the course of his 12-year career that took him from St. Louis to the San Francisco Giants, Detroit Tigers, San Diego Padres, back to the Cardinals, and then to the Chicago White Sox, Pittsburgh Pirates, New York Yankees, and Philadelphia Phillies.

The 1983 Cardinals were just a half-game out of first place on September 5. But a seven-game losing streak as part of a 3-10 road trip dropped them to eight games out two weeks later, and they wound up fourth in the NL East with a 79-83 record.

Cincinnati, LaPoint’s victim on May 24, dropped to 10½ games out of first place in the NL West with the loss. The Reds finished sixth with a 74-88 record.