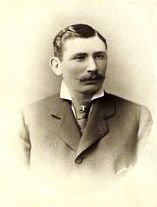 The first cycle — single, double, triple, and home run — in the major leagues was accomplished by Charles Joseph Foley (also known as Curry Foley) of the Buffalo Bisons in a National League game against the Cleveland Blues on May 25, 1882. The contest was played at Riverside Grounds, the home ballpark of the Bisons. Fewer than 1,000 fans were in attendance on this cold Thursday afternoon.

The Buffalo squad had just returned from a road trip and their meeting with Cleveland was the fourth time the two teams met in 1882. Hugh Daily took to the mound for the Bisons against Cleveland’s George Washington Bradley. According to the Cincinnati Enquirer, “it was a regular walk-over from the word ‘go.’”1 After Daily retired Cleveland in the top of the first inning, Blondie Purcell led off the bottom half with a single to left field. With one out, Dan Brouthers singled, and with two outs, Deacon White singled, loading the bases for Foley, who “sent the ball over the left-field fence for a home run.” According to the Buffalo Commercial, “that’s how the ice was broken.”2

In the bottom of the second, Buffalo sent 11 batters to the plate and they combined four singles, three doubles, and a triple (by Foley) to bring home eight more runs. The Bisons added two runs in the bottom of the third, on hits by Brouthers, Richardson, White and Foley, raising their lead to 14-0.

Buffalo added a run in the fifth, aided by Foley’s double, and then iced the cake with five runs in the seventh inning. Cleveland avoided the shutout by getting a run in the top of the sixth. Fatty Briody reached base on a passed ball, Fred Dunlap doubled him to third base and he scored on a fly ball by Jack Glasscock. In this thrashing, Buffalo scored 20 runs on 28 hits. The Cincinnati Enquirer box score listed Buffalo as having 13 earned runs, while the box score in the Chicago Tribune gave the Bisons credit for 12 earned runs.

Foley was clearly the hero for the Bisons on this day. He hit a grand slam in the first inning, a triple in the second, a single in the third and a double in the fifth. He had 10 total bases in six at-bats. He became the first player to hit for the cycle. Foley also scored four runs. The Blues’ Bradley, victim of the Buffalo onslaught, had pitched 16 shutouts for St. Louis in 1876. Every Bison in the lineup had at least two hits; Brouthers had five and Foley had four. Foley’s home run was the only one of the game. Bill Phillips and Orator Shafer each hit triples for the Blues, but neither came around to score. Buffalo’s winning pitcher, Hugh Dailey, held the Blues batters to six hits. He “took everything as cooly as though playing a practice game with an amateur nine — but they couldn’t hit him.”3 Unfortunately, Bradley did not have the same success. The Bisons “sent it all over and outside the pastures until the fielders’ legs were weary and their courage gone.”4

The Cincinnati Enquirer wrote of the Cincinnati defeat: “The game proved a Waterloo for the visitors, and was robbed of all interest at an early stage by the terrific slugging. Nothing like it was ever seen before.”5 The Chicago Tribune said, “The Buffalos today showed some of the batting ability which they seemed to have kept in store all the season, and scored twenty runs while the Clevelands were perforce constant with a solitaire.”6 The Buffalo Commercial gave all the statistics: “In slugging it was a Jumbo-of-a-game. The Buffalos went to the bat 52 times in eight innings, made 28 hits with a total of 40 [total bases], reached base 33 times, and ran 103 bases, making 20 runs and earning 13.”7

In two previous seasons, Curry Foley had been a pitcher for the Bisons. During the 1882 season he played right field. He pitched once that year.8 Foley was described as “a below-average pitcher but an above-average hitter.”9 He was also one of the very few left-handed pitchers in the National League’s early seasons.

In addition to the sources mentioned in the Notes, the author consulted baseball-reference.com, mlb.com, retrosheet.org, and sabr.org. The author thanks Dirk Lammers of nonohitters.com for his valued assistance with obtaining box scores. In addition, I referenced the following:

Entering 2020, only nine players, including Curry, have a grand slam as part of their cycle: