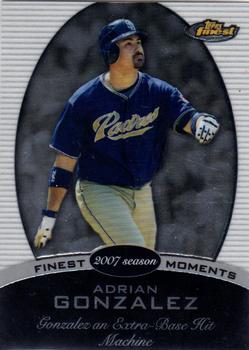 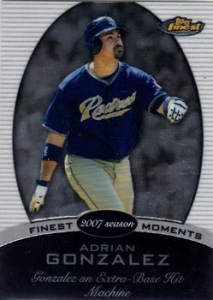 San Diego Padres fans had already witnessed three extra-inning games of 13 or more innings (including one for 22 innings) during the first seven weeks of the 2008 season, so when the game on May 25 against Cincinnati was tied after nine innings, it really wasn’t a big surprise. What the 36,508 Petco Park fans didn’t fully expect to play out, though, was an 18-inning affair won by the Padres on a dramatic three-run walk-off home run.

A classic matchup between two future Hall of Famers, pitcher Greg Maddux and slugger Ken Griffey Jr., might have been anticipated as the main draw for the game between the two last-place teams. But it turned out they weren’t the biggest story of the marathon contest.

Instead, the two stars of the game were lesser-known Padres players, first baseman Adrian Gonzalez and pitcher Josh Banks. Gonzalez delivered the game-winning home run nearly six hours after the game started. Banks, in only his fifth major-league game, claimed his first career win when he pitched six innings in relief without yielding a run to the Reds.

Padres manager Bud Black started Maddux, who had won 14 games for the Padres the year before. The 41-year-old with 350 career wins had been struggling in May 2008, barely exceeding five innings per game, while giving up double-digit hits in two of his last four starts.

Brothers Jerry and Scott Hairston were in the starting lineups for the Reds and Padres, respectively. They were members of a three-generation family in the major leagues that included father Jerry Hairston Sr. and grandfather Sam Hairston.

Another pair of brothers were on the Padres roster: Adrian Gonzalez was the starting first baseman, while brother Edgar was a utility infielder in his rookie season.

The Padres got the scoring started with three runs in the second inning. Khalil Greene’s double scored Kevin Kouzmanoff, who had led off the inning with a single. Greene advanced to third on a throwing error by shortstop Jerry Hairston, and scored on a fly ball to deep left by Michael Barrett. Paul McAnulty followed with his third homer of the season for a 3-0 lead.

The Reds scored a run in the fourth inning. Griffey, whom Maddux had struck out in the first inning, doubled and scored on Javier Valentin’s two-bagger.

Kouzmanoff made the score 4-1 when he homered to lead off the bottom of the fourth.

The Reds tied the score in the fifth. Jerry Hairston singled and stole second after Griffey struck out. He scored when Brandon Phillips’ fly ball to center was mishandled by Scott Hairston as a result of poor communication with left fielder McAnulty. Adam Dunn followed with a two-run home run, the 251st of his career and the second-most in Reds history by a left-handed hitter (after Ted Kluszewski).

In the bottom of the fifth inning, Tadahito Iguchi doubled to left and scored on Gonzalez’s double to right.

With David Weathers pitching for the Reds, the Padres tied the game again in the eighth on Kouzmanoff’s second home run of the game. It was the first multi-homer game of his career and his fourth home run in six games.

The Reds went ahead again in the top of the ninth, off closer Trevor Hoffman. After he gave up singles to Griffey and Phillips, Ryan Freel beat out a grounder to second and Griffey scored.

Just as quickly, the Padres’ Scott Hairston tied the game in the bottom of the inning, 7-7, with a leadoff home run to left field off Reds closer Francisco Cordero.

Each team scored twice in the 11th inning. Griffey led off the top of the inning with a double, his 1,117th extra-base hit, tying him with Ted Williams and Jimmie Foxx for 13th place on the career list. After Phillips singled and stole second, Reds pinch-hitter Paul Janish hit a two-run single. In the bottom of the inning, after two singles and a sacrifice, Iguchi drove in a run on a grounder and Brian Giles doubled in another one.

Josh Banks came into the game in the 13th inning for the Padres and shut out the Reds for six innings, scattering five hits and two walks. In the bottom of the 13th, with the Reds out of relief pitchers, Dusty Baker looked to starter Aaron Harang to keep the Reds at bay. He succeeded by striking out nine batters in his four-inning appearance, striking out the side twice.

Paul Bako, the Reds’ last position player, pinch-hit for Harang and struck out with the bases loaded to end the top of the 17th.

With one out in the bottom of the 18th, Scott Hairston drew a walk off Edinson Volquez, another Reds starter, who had thrown a scoreless 17th inning. (Volquez had just pitched on Friday night when he struck out 12 in the Reds’ victory.) Hairston stole second as Iguchi went down swinging for the second out. Giles kept the inning alive when he hit a hard grounder to first baseman Joey Votto, who fumbled it and then threw behind Volquez as he went to cover first base.

With two outs and a full count, Adrian Gonzalez ended the marathon contest with a three-run home run to dead center. The Padres were 12-9 winners. Reds catcher David Ross had called for a fastball, but Volquez shook him off. After the game Volquez offered an explanation: “I wanted a changeup. It was my best pitch today. It went right over the plate.”1

Some sportswriters wondered why Baker didn’t have Volquez pitch around Gonzalez, the team’s best hitter. That would have loaded the bases for Kouzmanoff, who already had two homers in the game. Black’s observation: “A lot of times it’s tough to be a pitcher in a bases-loaded situation because you don’t know how a pitcher might respond. Dusty knows his players better than any of us, but Volquez has a little bit of a walk (issue).”2 Gonzalez was known to expand the strike zone, and it seemed as though the Reds were counting on that. But it didn’t happen on this at-bat.

The game lasted 5 hours and 57 minutes. At the time it was the Reds’ longest game ever. The Padres lost a 22-inning game to the Colorado Rockies five weeks earlier.

The Reds’ 10 pitchers struck out 19 Padres, Iguchi five times and Greene four. The only unused pitcher on the roster, Johnny Cueto, would have relieved Volquez if the game had gone longer. After the game, Baker commented, “I’ve never used a starter (as a reliever) in a game, much less two in a game. We were so close to getting everything lined up. That game really hurt.”3 Baker was referring to the fact that his staff had blown three saves in the game while recording two in the previous 49 games.

Adrian Gonzalez, who was in his third season with the Padres, went 4-for-9 in the game and knocked in four runs. He finished the season with his best performance to that point in his career: 36 home runs, 119 RBIs (third most in the National League), and a slash line of .279/.361/.510. Gonzalez earned his first All-Star selection. He became one of the organization’s best hitters during the 2000s and as of 2018 remained second to Nate Colbert in career home runs for the Padres. His Mexican heritage contributed to his immense popularity among the San Diego baseball community.

Padres fans had little to cheer about the rest of the season. The team finished in fifth place in the NL West Division, 21 games behind the division-leading Los Angeles Dodgers.