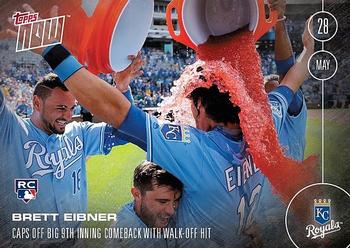 After back-to-back World Series appearances in 2014 and 2015, including their first championship since 1985, the Kansas City Royals began the 2016 season with high hopes of a third straight trip to the World Series. With most of their roster returning, it was not an unreasonable expectation. The defending champions, however, got off to an inconsistent start to the season. By the time the division-leading Chicago White Sox arrived in town for a four-game series on May 26, the Royals were only two games over .500 with a record of 24-22.

Kansas City was without the services of two key players. On the previous Sunday (May 22) in Chicago against the same White Sox, All-Star left fielder Alex Gordon and All-Star third baseman Mike Moustakas had collided chasing a foul ball. Gordon suffered a broken right wrist and would be out of the line up for a month, while Moustakas ended up missing the rest of the season with a torn ACL in his right knee.

The opening game of the series was rained out on Thursday, but in Friday’s game, the Royals staged a four-run rally in the seventh inning to pull out a 7-5 win. As a result, the Royals found themselves in third place, only a half-game behind the second-place Cleveland Indians, and one game behind the first-place White Sox in the American League Central Division.

For the afternoon game of Saturday, May 28, Kansas City sent right-hander Yordano Ventura (4-3, 4.81 ERA) to the mound, while Chicago countered with left-hander Carlos Rodon (2-4, 4.47 ERA). After a scoreless first inning for both teams, the Royals quickly got two outs on the White Sox in the top of the second inning, but three straight singles by Brett Lawrie, Alex Avila, and Avisail Garcia led to the first run of the game. A three-run home run by White Sox shortstop Tyler Saladino followed, to give Chicago a 4-0 lead. The Royals responded by loading the bases in their half of the inning, but they stranded all three men on base. They got a run back in the bottom of the third when rookie left fielder Whit Merrifield, filling in for the injured Alex Gordon, led off with a double, stole third base, and scored on a single by first baseman Eric Hosmer. The White Sox answered back in the next inning with a two-run homer by Avisail Garcia, Chicago’s designated hitter, to go up 6-1.

The White Sox added their seventh run of the game in the fifth inning when center fielder Austin Jackson led off with a single, advanced to second on a wild pitch by Ventura, and scored on an error by Royals second baseman Omar Infante.

With a comfortable 7-1 lead, Carlos Rodon handed over pitching duties to Zach Putnam in the sixth inning. Putnam put the Royals down in order, and neither team scored in the seventh or eighth inning. In the top of the ninth, the Royals survived a leadoff single by Saladino, but not without cost. While successfully chasing down an infield popup for the first out of the inning, All-Star catcher Salvador Perez collided with his third baseman, Cheslor Cuthbert, and left the game with a leg injury.

Having lost a three-run lead late in the previous evening’s game, White Sox manager Robin Ventura was taking no chances, even with a six-run lead. He sent in his closer, David Robertson, to shut down the Royals in the bottom of the ninth inning. Robertson entered the game with a minuscule 0.96 ERA, and had already saved 12 games for the White Sox. He struck out the Royals’ leadoff batter, Paulo Orlando, but a single by Cuthbert, a double by Brett Eibner, and a walk to Omar Infante loaded the bases. Alcides Escobar then drew a bases-loaded walk to bring in Cuthbert. A single up the middle by Whit Merrifield scored Eibner and Infante, and Escobar went to third. Lorenzo Cain hit into a fielder’s choice, forcing Merrifield out at second, but scoring Escobar to make the score 7-5. With the Royals down to their final out, Eric Hosmer, their cleanup hitter, doubled to center field, scoring Cain.

With the tying run on second, the struggling Robertson was replaced by Tommy Kahnle. Drew Butera, batting for the injured Salvador Perez, hit a double to left field, scoring Hosmer and tying the game. A wild pitch from Kahnle allowed Butera to advance to third. Paulo Orlando was intentionally walked, and advanced to second on defensive indifference. Jarrod Dyson, pinch-hitting for Cuthbert, was given an intentional walk. With the bases loaded, rookie Eibner, playing in only his second major-league game, stepped to the plate. Eibner battled Kahnle to a full count and fouled off four pitches before hitting a single to right field on the 10th pitch of his at-bat to deliver the winning run from third.1 Eibner’s RBI, his second hit of the inning, capped off the largest ninth-inning come-from-behind victory in Royals history. The Royals, coming into the inning down 7-1, had sent 12 batters to the plate, collecting six hits (three of them doubles) and four walks, leading to the seven-run outburst. Chien-Ming Wang, pitching in relief of Yordano Ventura, tossed two scoreless innings to pick up his third win of the season.

Having been unable to hold a late-inning lead for a second game in a row, Chicago’s understandably frustrated manager, Ventura, observed: “There’s no shot clock, there’s no time clock. If you can’t close it out, that’s what happens. Today we couldn’t close it out.”2

Unfortunately for the White Sox, the Royals were not done with their late-inning heroics. On the next day, they came from behind for the third game in a row, scoring three runs in the bottom of the eighth inning to overcome a two-run deficit on the way to a 5-4 win. In completing the three-game sweep of the White Sox, the Royals took over first place in the Central Division with a 27-22 record.

Their record-setting victory on May 28 turned out to be one of the few bright spots in what was ultimately a disappointing season for Kansas City. Plagued by additional injuries, the Royals fell well short in their bid for a third straight World Series appearance. They struggled to an 81-81 record and a third-place finish in the Central Division, 13½ games behind the division-winning Cleveland Indians.

In addition to the sources cited in the Notes, the author also relied on Baseball-Reference.com and Retrosheet.org for box scores, play-by-play information, and other data.