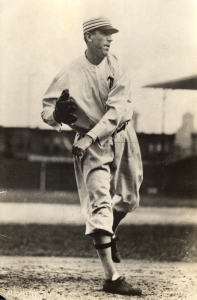 had 287 major-league victories to his credit when he took the mound for the opening game of a doubleheader between the host St. Louis Terriers and the Brooklyn Tip-Tops on May 29, 1915. A native of Gettysburg, Pennsylvania, Plank had spent his previous 14 seasons with the Philadelphia Athletics, posting seven 20-win seasons in the process, before his jump to the Terriers, St. Louis’s entry into the “outlaw” Federal League.

On this day, the Terriers, bottom-dwellers in the first year of the league with a dismal 62-89-3 record in 1914, were mired in sixth place, but only four games behind the league-leading Chicago Whales. Plenty of games remained.

The Tip-Tops, owned by baker Robert Ward,1 were two wins better but only a game closer to the Whales in the standings. The Terriers and Tip-Tops split a pair of games earlier in May in Brooklyn, and this was the first matchup west of the Mississippi River.

Federal League Park, also known as Handlan’s Park, was built as the Terriers’ home base the year before. With a seating capacity of 15,000, the ballpark had ample seating. But with black clouds covering the sky the entire afternoon, only about 500 people2 showed up for the twin bill this day, noted as “easily the smallest crowd that has witnessed a Saturday game at Fed Park this season.”3

Fielder Jones guided the Terriers, his first year at the helm after future Hall of Fame pitcher Mordecai “Three Finger” Brown oversaw their inept performance the year before. Jones had the option of two eventual 20-game winners (Dave Davenport and Doc Crandall) in addition to Plank, but the 39-year-old lefty was the choice for game one.

The Tip-Tops’ Lee Magee, Brooklyn’s youthful manager, who also penciled himself in as the starting second baseman, countered with Tom Seaton on the mound. Seaton was a veteran of 62 starts for the Philadelphia Phillies in 1912 and 1913 before jumping to the Federal League. In 1914 he recorded 25 wins for the Tip-Tops after previously winning 27 games with the Phillies in 1913. On paper, he was a formidable option to the Terriers’ Plank.

But on this day, reality didn’t follow that script.

A scoreless top of the first for Brooklyn was immediately followed by a scoring onslaught by St. Louis.

Jack Tobin, or Johnny, as he was most commonly known in St. Louis, led off for the Terriers and singled. Bobby Vaughn did the same, and after LaRue Kirby walked, Babe Borton drove in Tobin and Vaughn. The rout was on. Ward Miller’s hit filled the bases again, and after catcher Grover Hartley was walked, forcing Kirby home, Charlie Deal hit a long fly that plated Borton. Ernie Johnson drove in Miller with another sacrifice fly, and the lead was 5-0. Plank’s failed at-bat mercifully ended the inning.

Brooklyn again was scoreless in the second, and Tobin again led off with a base knock in the bottom of the frame. Vaughn followed suit.

Wrote the Brooklyn Daily Eagle of Seaton’s brief misadventure: “Lee [Magee] trotted out Tom Seaton. But he might as well have taken the mound himself, for the cowboy, after a four day lay off, had nothing but his glove. He was hit to all parts of the lot, and was wild in the bargain, lasting just one full inning, being derricked with two on and none out in the second frame.”4

Tip-Tops manager Magee had witnessed enough ineffectiveness out of Seaton and summoned Happy Finneran to the mound. Finneran retired Kirby, but Borton singled to score Tobin, Miller’s fly ball pushed Vaughn across, and Borton scored on Deal’s safety to give the Terriers an 8-0 lead.

Plank proved unhittable, allowing just three scattered singles and two walks in a complete-game effort. Most notable was his dominance of Benny Kauff, referred to in the St. Louis Post-Dispatch as “the Ty Cobb of the federal circuit.”5 Kauff was able to draw a walk in his second appearance, but grounded out in his third at-bat and bookended his day with two of the five strikeouts Plank recorded.

Despite the commanding lead, St. Louis wasn’t done scoring, adding a single tally in the fifth and a pair of runs in the sixth. The extra counters were so insignificant to the final outcome that none of the newspaper accounts bothered to provide details.

Finneran, despite coming into a game that was essentially over before he threw his first pitch, was charged with an additional four earned runs in seven innings pitched, allowing 12 hits with a single strikeout. It was his longest appearance of the season up to this point, and he would eventually win 10 games in 1915 for the Tip-Tops, posting a respectable 2.80 earned-run average. His two seasons in the Federal League were the most productive of his career; he was out of professional baseball before the end of the 1918 season.

Jack Tobin provided a notable performance for the Terriers, going 5-for-5 and scoring two runs with one RBI.

The Terriers’ win was their fourth straight win, and although now tied with Brooklyn for fifth-place in the Federal League standings, both teams stood just 3½ games out of the top position.

The opener had a 2:00 P.M. start time, and coupled with dark and threatening skies the entire afternoon, some accounts put the attendance as low as 100 people in the stands.7 Despite the conditions, a rematch would immediately follow.

In addition to the sources mentioned in the Notes, the author also consulted Baseball-Reference.com and Retrosheet.org

6 “Ten-Inning Tie Game Best Magee Could Do in St. Louis.”