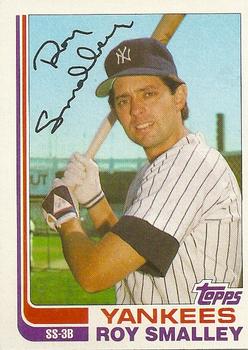 The Minnesota Twins looked for better times as they moved into the Hubert H. Humphrey Metrodome in 1982. Their final 11 years at Metropolitan Stadium had mostly been mediocre to morbid with the team drawing more than 1 million fans in only two of those seasons.

Twins owner Calvin Griffith was known as a tightwad, a necessity, or a choice (probably a combination of both), and the team was affected by the gutting of the reserve clause. The ability of players to become free agents caused Griffith to trade Bert Blyleven in 1976 rather than lose him to free agency. The 1977 season brought the first real excitement for baseball to Met Stadium in seven years, but that was dampened at the end of the year when a pair of stars, Larry Hisle and Lyman Bostock, signed with other teams.

The Twins had one more good season at the Met, 1979, when they were led by shortstop Roy Smalley, one of the players who had come in the trade for Blyleven three years before. Smalley had spent some time in the area as a youngster as his dad, Roy Smalley Jr., played for the minor-league Minneapolis Millers, who were managed by Smalley Jr.’s brother-in-law, Gene Mauch. Nearly 20 years later, Mauch was back, managing the Twins, and one of his players was his nephew, Roy Smalley III.

As is often the case when a team lobbies for a new stadium, one of the reasons given is that the increased revenues from a new ballpark will lead to an improved team. Promises are at least implied that the team will spend more on its payroll and, in the final year of Met Stadium, Griffith demonstrated that by signing Smalley and catcher Butch Wynegar1 to four-year, multimillion-dollar contracts.

However, the concept of higher-priced talent in the new ballpark didn’t last long. After only four games at the Metrodome, Smalley was gone, traded to the New York Yankees. A month later, Wynegar was also dealt to the Yankees, creating a feeling of betrayal among the fans and reporters.

The New York Yankees (22-20) were making their first visit to the Metrodome at the end of May. It was a homecoming of sorts for Smalley and Wynegar, although Smalley said there were detractors, fans who held it against Smalley that he had gotten a large contract or that that he had wanted to go to New York. But Smalley says, “I was ripped out of here.”2

Smalley’s wife was from Minnesota, they had a son born here, and he and his wife had just given the go-ahead to an architect for a home they were building on the day before he was traded.3

The next game, a Saturday matinee, Smalley was batting seventh in the lineup. The game was scoreless when he came up for the first time, in the second inning, although the Yankees had Bobby Murcer on second and Graig Nettles on first with no out.

With the count 3-and-2, the runners were going as Terry Felton (0-5, 4.02 ERA) threw a pitch that was up and away. Smalley said it was “a borderline pitch, too close to take.” It wasn’t a pitch location that worked to Smalley’s strength and it may have been a ball, but Smalley said he knew he had to protect the runners.4 He swung and missed and then watched a bizarre sequence on the bases.

Catcher Sal Butera’s throw to third baseman Gary Gaetti was so far ahead of the runner that Murcer stopped and retreated toward second. Gaetti ran him back to the base. When Murcer got to second, Nettles, who was standing on the base, took off back to first. Gaetti tagged Murcer, who was by this time standing on second base by himself. When Gaetti realized that Murcer was not out, he threw to first baseman Kent Hrbek, who tagged Nettles. As this was happening, Murcer took off for third. Hrbek fired across the diamond to Felton, who was covering third. Felton tagged out Murcer for a 2-5-3-1 triple play, the first triple play in the Metrodome.

Said Nettles of the escapade, “What the Yankees need is a second-base coach.”5

The scoring finally started in the last of the fourth when Dave Engle tripled to drive in Hrbek and then came home on a groundout to give the Twins a 2-0 lead.

The Yankees got one back in the fifth on Smalley’s run-scoring double and took the lead with three in the sixth. Two scored on a bases-loaded single by Nettles and another came home when Smalley bunted into a fielder’s choice.

Although the Metrodome was barely two months old, it had a reputation for wackiness. The night before, Tom Brunansky of the Twins got an inside-the-park home run when Lou Piniella lost his fly ball in the dark roof. In this game, during the day, the roof wasn’t as problematic, but the turf was. With Brunansky on first in the last of the sixth, Hrbek hit a Texas Leaguer to left that dropped in and bounced over Dave Collins’s head. Smalley was playing shortstop, but it was up to him to run the ball down near the warning track. Hrbek had a triple and soon after scored the tying run on Gaetti’s sacrifice fly. Mickey Hatcher had tagged at first and tried to advance on the play. He overslid second and was tagged out, but, fortunately for the Twins, Hrbek had crossed the plate with the tying run before the final out of the inning.

After that flurry of runs in the middle innings, a pair of scoreless frames followed. The starters were gone.  Brad Havens had relieved Felton in the sixth, and the Yankees’ Tommy John (4-4, 2.23 ERA) had to come out of the game when Butera led off the seventh with a single off his shin.

Havens retired the first two Yankees in the ninth before Willie Randolph singled to center. The Twins shifted to the right for Ken Griffey, who foiled their strategy with a high fly that fell just inside the left-field line. By the time left fielder Hatcher could get to the ball, Randolph had scored and Griffey was on second. Oscar Gamble singled home Griffey, and Shane Rawley retired the Twins in the bottom of the ninth to give the Yankees a 6-4 win.

It was the first regular-season game in the Metrodome that did not have a home run. Terry Felton did not get a decision in the game, although he had 13 decisions that year — all of them losses. In his major-league career, Felton was 0-16, a record for the most losses without a win in both a season and a career.

For the Twins, it was their 10th straight loss and third in a row that they had lost in the ninth. They at least broke that streak the next day, losing in the 10th inning, and the overall losing streak continued, reaching 14. The Twins finished the season at 60-102, the worst record in the majors and the team’s worst since moving to Minnesota.

As for the Yankees, after a six-year stretch in which they won five division titles, three pennants, and two World Series, the team was heading downward. Reggie Jackson was gone to free agency as owner George Steinbrenner decided speed was the weapon needed and signed Dave Collins. Smalley said this era in New York was “particularly crazy in between what they were doing with the roster.” Smalley first replaced Bucky Dent at shortstop and then platooned with Toby Harrah at third base. John Mayberry arrived, and Smalley said, “They were trying to put an All-Star platoon at every position.”

Smalley was with the Yankees a little over two years. He was traded to the White Sox in July 1984 and made it back to Minnesota, coming to the Twins in a trade before the 1985 season and finishing his career by playing in the 1987 World Series. He and his family made Minnesota their home, and Smalley is an announcer for some of the Twins games, remaining a frequent presence in the press box.

1 Wynegar made the American League All-Star team in his rookie season of 1976.  He was featured in a Twins commercial with the announcer saying that Wynegar loved baseball so much that he would play for nothing. At that point the commercial cut to a smiling Calvin Griffith, who said, “I sure do like that kid.”