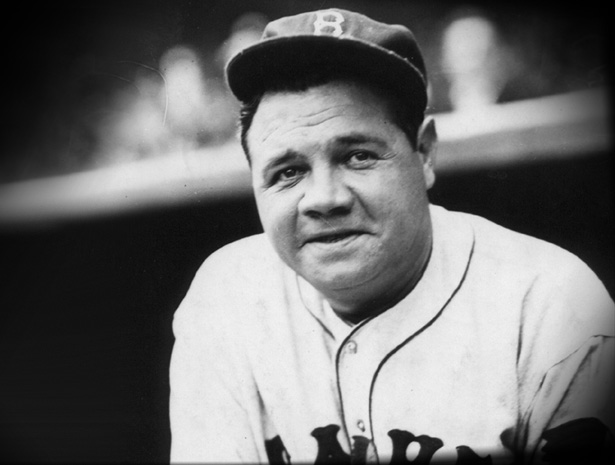 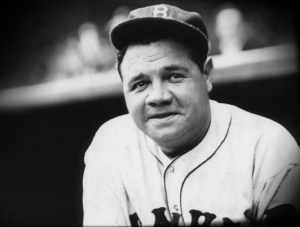 Babe Ruth was released by the New York Yankees at the end of the 1934 season. He still wanted to get hired as a manager and so he signed with the Boston Braves. His job titles were vice-president, assistant manager, and left fielder. Ruth hoped that he would be named manager if the Braves skipper Bill McKechnie left.1 The Braves were a franchise in need of a savior and they were anticipating that Ruth’s presence in the lineup would fill the ballpark.

Ruth hit three home runs in a losing effort against the Pittsburgh Pirates on May 25. After that slugging performance, he went hitless in the next four games. He started three of those games in left field and pinch-hit in another one. Ruth pulled a muscle while playing outfield on May 26, Babe Ruth Day in Cincinnati. He pinch-hit the following day but started in left field in the final game of the series.

In that game, Ruth endured possibly the worst experience of his career. Every Reds batter purposely hit the ball to left field in the fifth inning. Ruth, hampered by his muscle strain, was unable to field the balls and the Reds scored five runs. When the inning finally ended, Ruth went to the clubhouse, not the dugout, as the fans heckled him.2 On the way, he picked up a small boy and hugged him before leaving the field.3

When the Braves arrived in Philadelphia on May 29, the Phillies celebrated Babe Ruth Day. Ruth was presented with a floral bouquet as the crowd cheered him.4 Ruth walked twice during the game as he helped the Braves snap out of an six-game losing streak. But he was hitting just .188 when the Braves arrived in Philadelphia and his batting average continued to drop when he failed to get a hit in two at-bats that afternoon.

The Braves hoped to notch another win when they took the field for the first game of doubleheader on May 30. Jim Bivin started for the Phillies. Although he did not give up a run in the first, he did surrender runs in four of the next five innings before he left the game with the Phillies down 5-4.

Ruth was penciled in as the starting left fielder for the game. In the first inning, he grounded out to Dolph Camilli at first. Unknown to everyone in attendance, it was the last time that Babe would stand in the batter’s box as a major leaguer.

When the Braves took the field, Ruth took his place in left field. He continued to struggle defensively. First, a ball dropped in front of him when he couldn’t run in to catch it. When Lou Chiozza hit a fly ball to left field, Ruth failed to catch it. The ball rolled past him to the wall. Ruth finally caught up to the ball and threw it to the relay man, third baseman Pinkey Whitney. Whitney relayed the ball to home and Chiozza was thrown out as he tried to make an inside-the-park home run. Ruth was credited with an assist on the play, his last one, but the Phillies had jumped out to a 3-0 lead.

As the Braves left the field after the third out, Ruth did not join them. He left through the center-field fence where the clubhouse was located. As he slowly trotted off the field, the 18,000 fans who had shown up gave him one last standing ovation.5 No one at the Baker Bowl suspected that Ruth would announce his retirement three days later.

Fred Frankhouse started for the Braves. He lost his last outing after winning three games in a row for the Braves. He was looking to rebound from his previous loss where he pitched seven innings and gave up four runs. The Phillies jumped on Frankhouse for three runs in the bottom of the first. But he settled down and gave up only one more run until the eighth when things fell apart for him.

Although the Phillies scored another run in the fourth inning, the Braves tied the game in the fifth. Hal Lee, who had replaced Ruth in left field, singled. Then Randy Moore homered and suddenly the score was 4-4.

The Braves grabbed the lead in the sixth when they scored a run. Boston added another run in the seventh. Orville Jorgens was now pitching for the Phillies. He walked Moore who moved into scoring position on a sacrifice by Mallon. Moore scored when Whitney hit a deep single to left field. With the score 6-4, it looked like the Braves might win their second consecutive game. But the Phillies bats came back alive in the bottom of the eighth inning.

First Frankhouse walked Camilli. Then Mickey Haslin singled to center. When the center fielder couldn’t handle the ball, Camilli ended up on third and Haslin was standing on second. Chiozza singled both runners home. Al Todd hit the ball to Frankhouse, forcing Chiozza out at second. Then Johnny Vergez hit a ground ball to the shortstop who threw the ball wild as he tried to get the force out on Todd. Todd ended up on third. Jimmie Wilson then laid down a perfect squeeze bunt to score Todd.

Ethan Allen hit the ball to Billy Urbanski at short. Urbanski threw to Mallon to get the lead runner but then Mallon threw the ball into the dugout when he tried to turn the double play. Vergez scored and Allen ended up on second. George Watkins doubled in Allen. Frankhouse then walked Moore and gave up a single to Camilli to score Watkins.

Frankhouse struggled to get the third out. After Watkins scored, Braves manager Bill McKechnie finally removed him for Ben Cantwell. Cantwell gave up a double to Haslin to score Moore. Cantwell walked Chiozza to load the bases before getting Todd to fly out to center for the elusive third out. By the time that the inning ended, the Phillies scored seven runs and grabbed the lead 11-6.

The Braves had run out of steam. They managed one hit against Curt Davis who was brought in to save the game in the ninth. But that was all that they could muster. They not only lost the game but were pummeled by the Phillies in the second game of the doubleheader, 9-3.

Ruth did not know it at the time but he would never play another major-league game. After the Braves returned to Boston, he told Judge Emil Fuchs, the Boston Braves owner, that he couldn’t play. Ruth said that his knee was going to need some rest. Yet he was willing to play in an exhibition game in Bridgeport, Connecticut to fulfill a promise that he had made. Fuchs was angry and refused to let Ruth play in the game. Ruth quit and Fuchs told him that he was fired.6

Ruth and his wife Claire packed their car and drove back to New York. Claire said later that Ruth cried during the drive back to their home. On June 4, 1935, Ruth called a press conference and told reporters that he was finished with the Boston Braves. He vented his anger at Fuchs, saying “[h]e would double-cross a hot cross bun.”7

The baseball world had lost a legend. The newspapers of the day expressed sadness that Ruth’s time had passed. The Milwaukee Journal wrote that “a truly great figure in the field of sports passes rather forlornly, and we are sorry. We guess that there is no way to beat this inevitable anti-climax to a brilliant sports career.”8

Jake Wade in the Charlotte Observer said Ruth was “the finest slugger that baseball has ever known, the most powerful drawing card in the history of the game. [His] gestures to the kids, his tolerance to old people and young people…made life happier and gayer for thousands.”9

The New York Times wrote that the presidents of several major-league teams stated that no teams were interested in giving Ruth any more chances. “To put it bluntly, the magnates are convinced that Ruth has outlived his usefulness as a player and that he has not shown any real capacity to justify giving him a trial as a club manager.”10

Although there rumors persisted throughout the season that he would be back in Boston or with some other team, Ruth never played again. The only offer that he received was from a minor-league team in Palatka, Florida.11 Ruth’s career ended with ground ball and a slow walk off the field in Philadelphia.

In addition to the sources cited in the Notes, the author used Baseball-Reference.com and Retrosheet.org for box score, player, team, and season information as well as pitching and batting game logs, and other pertinent material.

2 The clubhouse at Crosley Field was located behind the left-field wall.