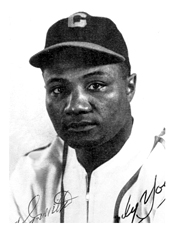 On a warm Saturday afternoon in May, with the nation’s list of war dead growing as the country battled in two theaters of war, the baseball fans of St Louis were given a rare treat. Big-league black baseball came to town and put on a show at Sportsman’s Park. The New York Black Yankees defeated the Birmingham Black Barons, 8-4. Such was the scene, with more than 11,000 spectators present, on the first Decoration Day of World War II.

The game was won and lost in the course of the fifth inning when the Black Yankees’ bats feasted on Birmingham pitching, stringing together six runs on seven hits.1

St Louis had hosted big-league black baseball until 1931, when the economic turmoil of the Great Depression forced the Negro National League out of business. During the 1910s and up to the formation of Rube Foster’s Negro National League (NNL) in 1920, the city was home to the St Louis Giants. The Giants hit a financial snag in 1921 that led to a change in ownership and a new name — the Stars — for 1922. The Stars continued in the NNL and were a powerful team, winning pennants in 1928, 1930, and 1931 behind stars like Cool Papa Bell, Willie Wells, and Mule Suttles.2 The Stars played their home games at Stars Park, located near the intersection of Compton and Laclede Avenues, close to the campus of St. Louis University, about two miles south of Sportsman’s Park. After the NNL folded and the Stars’ reign ended, it became rare for the Mound City to host big-league black baseball games.

While some big-league stadiums, like Forbes Field in Pittsburgh, Griffith Stadium in Washington, and Comiskey Park in Chicago, hosted black baseball regularly, Negro League teams rarely played at Sportsman’s Park. The ballpark, at the corner of Grand and Dodier, was the home to the Browns and the Cardinals and the seating was segregated. Black patrons were allowed to sit only in the section known as the right-field pavilion, a practice that would not end until 1944.3

But with the winds of war came change. Even in 1941, prior to the United States entering World War II, some things were beginning to change. In cities throughout the country, there was a push for greater inclusion for black workers in war jobs. A. Philip Randolph and the March on Washington Movement made strides in gaining greater inclusion in factories. President Franklin D. Roosevelt issued Executive Order 8802, which established the Fair Employment Practices Committee to try to ensure nondiscriminatory hiring practices in factories that supplied war materials under federal government contracts. Satchel Paige twice brought teams to St. Louis in 1941 to play at Sportsman’s Park, once on the Fourth of July, a game that saw Paige and the game’s organizers push for and achieve more inclusive seating practices for black patrons at the ballpark, and again in October versus Bob Feller and his major league all-stars.4

One of the interesting highlights of the game on Decoration Day between the Black Yankees and Black Barons was the pitching of Gene Smith for the New York team. In the words of one scholar, Smith was a “power pitcher, he had a good fastball and slider,” who had three no-hitters during his career.5 On this day at Sportsman’s Park, though he was erratic, with two wild pitches, a hit batsman and 11 walks. Nonetheless, Smith pitched a complete game and surrendered only five hits. In a few tight spots over the course of the game, Smith was able to buckle down and make the pitches he needed to strand Black Barons on the bases.

The Black Yankees began the scoring in the second inning with two runs. The Black Barons countered with three in the third to take the lead.

Things would stay that way until the fifth inning, when the Black Yankees opened the floodgates with six runs crossing the plate.

Dan Bankhead, who would later play with the Brooklyn Dodgers, appeared in relief in the game for the Black Barons. Bankhead, one of a family of five brothers who played in the Negro Leagues, was a hard-throwing right-handed pitcher. He was known for a “blazing fastball and a tantalizing screwball.”6 When Bankhead debuted with the Dodgers on August 26, 1947, joining teammate Jackie Robinson, he became the first black pitcher in the National League. Bankhead hit a home run in his pitching debut though his time on the mound was not so successful, as he appeared in 52 games over parts of three seasons with an ERA of 6.52. Bankhead and Robinson finished the year with the Dodgers losing to the Yankees in the World Series.7

Before the marquee game, fans were treated to a beauty pageant with the title of Miss Midwest on the line. There was also a patriotic display with a boys and girls drum and bugle corps demonstration. As Normal “Tweed” Webb of the St. Louis Argus noted, “even in the midst of the baseball spectacle, the war was not forgotten.”9

There was also a preliminary contest featuring two local teams. The Cosmopolitan Insurance Company (Cosmo) and the East St. Louis Colts squared off for local bragging rights. Doc Brackens toed the slab for the Colts while Lefty Whitlock pitched for the Cosmo club. Whitlock and the Cosmo team won the game, 7-1.10