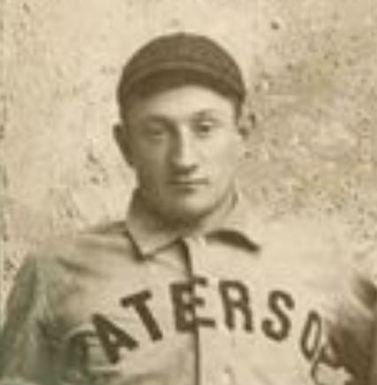 In the 1890s, Paterson, New Jersey, was a thriving city of 100,000 people. It was known as the Silk City, because its mills produced large quantities of the fashionable fabric. Its minor-league baseball team was nicknamed the Silk Weavers. In the spring of 1896, co-owners Ed Barrow and Charles McKee entered the team in the Atlantic League and persuaded a pair of up-and-coming Pennsylvanians to join the squad: Honus Wagner and Emmet Heidrick.

Barrow was the manager and Wagner and Heidrick were stars of the 1896 Paterson Silk Weavers. Wagner played first base and third base and batted .348; Heidrick, a fleet outfielder, hit .294.1 Disagreeing over which games counted in the standings, three teams had claimed the 1896 pennant.2 At a league meeting, it was decided that Newark had edged Paterson and Hartford for the title.3 Wagner and Heidrick returned for the 1897 season, and with Barrow elected as league president, McKee became the Paterson manager.4

Meanwhile, Lancaster (population 40,000) fielded a team in the Pennsylvania State League. Upon the demise of that circuit in July 1896, the team moved to the Atlantic League.5 There was great anticipation for the 1897 home opener against the visiting Silk Weavers. Originally scheduled for Monday, May 3, the game was delayed two days by two rainouts.

The venue was McGrann’s Park in Lancaster. Owned by railroad magnate B.J. McGrann, the 25-acre park featured a grandstand and horse racing track. The ball field was laid out in such a way that the racetrack intersected the outfield.6 Two days of rain made the field and track muddy.

The Lancaster “Maroons” wore gray uniforms with maroon stockings and cap, and “Lancaster” written across the shirt in maroon letters.7 The Silk Weavers looked sharp in their new uniforms, but the shirts read “Patterson,” a misspelling of “Paterson.”8

The Maroons were managed by Frank Rinn, who chose right-hander Jack Dolan as his pitcher. McKee selected Lee Viau, a righty with 83 major-league victories. The sole umpire was Edward “Fatty” Cline, a rotund gentleman with six years of minor-league umpiring experience.9 The attendance was estimated to be 1,200.

The home team batted first. Viau walked the first two batters, John Buttermore and Frank “Piggy” Ward, but they did not score. Bill Keister led off the bottom of the first and got aboard when his grounder was fumbled by shortstop Art Madison. After Heidrick sacrificed, Dolan walked Frank Haller.

The Paterson Evening News described what followed: “Then came the mighty Wagner and the first one that came his way was sent to the suburbs of the celestial regions and came down far, far away in left field.”10 It was a two-run triple for the 23-year-old Wagner. He came home on Robinson’s fly ball, and Paterson led 3-0.

The Maroons got one back in the second inning, on singles by Madison and Andy Roth and Dolan’s fly ball. Singles by John Stafford, George Smith, and Bob Westlake netted a run for the visitors in the fourth.

In the sixth inning, Lancaster’s Ralph Seybold, “a strapping big man,”11 crushed a drive that caromed off the top of the center-field fence and bounded back to the racetrack. Fast work by Robinson, the Paterson center fielder, held him to a double. The next man up, James Graham, singled to score Seybold.

The Maroons rallied for four more runs in the top of the seventh. Dolan and Buttermore singled. Ward grounded to Keister at short, who, in his haste to turn a double play, fumbled the ball, and the bases were now loaded. George Leidy hit sharply back to Viau, who made a wild throw home, allowing Dolan to score. Sam LaRocque followed with a two-run single, and Leidy tallied on Seybold’s fly.

The Silk Weavers came to bat in the bottom of the seventh trailing 6-4. Keister reached on an error by Graham, the third baseman, and scored on Heidrick’s “slashing” triple to left-center field.12 Heidrick came home on Wagner’s base hit, and the score was tied, 6-6.

Paterson forged ahead in the eighth. With one out, Smith drew a walk, and Westlake rapped a grounder that was fielded by Ward, the second baseman. To reach second base, Smith evaded Ward’s tag by going out of the baseline. Ward fired to first, but Westlake, too, was safe. The Lancaster fans were furious that the umpire did not call Smith out for going out of the baseline; their “howl of derision … could have been heard a mile.”13 Viau advanced Smith and Westlake with a sacrifice bunt, and Keister sent them home with his “corking single to right.”14

But the Maroons came right back with two runs in the top of the ninth. Buttermore led off with a walk, and Wagner, playing third base, could not handle Ward’s “hot grounder.”15 The runners moved up on Leidy’s sacrifice bunt and were brought home by LaRocque’s fly ball and Seybold’s single.

With the score tied in the bottom of the ninth, “everybody was on edge, the strain alike on the part of players and spectators being intense.”16 After Haller led off and flied out to right field, Wagner “sent the sphere on a journey through space,” “a tremendous three-bagger” to deep center field.17 Robinson lifted a fly ball that was caught by Seybold in left field; Wagner tagged up at third and beat Seybold’s throw to the plate. The final score was Paterson 9, Lancaster 8.

Lancaster reporters blamed the loss on umpire Cline for failing to call Smith out in the eighth inning. But the reporters felt it was one of the most exciting games ever seen in Lancaster. And they marveled at Wagner. He “covered all the territory about the third station and gobbled up several grounders which properly were [shortstop] Keister’s chances,” noted the New Era.18 He “can certainly hit the ball,” said the Morning News. “He has the most awkward motions of any ball player who comes to this city, but he usually makes his play and he is a tower of strength to his team.”19

The Intelligencer said, “That man Wagner is a wonder. He plays ball something like a dredging machine going down for a bucket of mud and he usually gets what he goes after.”20 Many years later, Tommy Leach, who teamed with Wagner in the major leagues from 1898 to 1912, echoed this description: Wagner “didn’t seem to field balls the way we did. He just ate the ball up with his big hands, like a scoop shovel, and when he threw it to first base you’d see pebbles and dirt and everything else flying over there along with the ball.”21

Wagner had a .379 batting average when he left Paterson in midseason to join the Louisville Colonels of the National League. He made his major-league debut with the Colonels on July 19, 1897. Without Wagner, the Silk Weavers finished the 1897 season in sixth place in the eight-team Atlantic League. Lancaster captured the pennant with an impressive 90-45 record. In a late-season run, the Maroons won 21 consecutive games.22

Game coverage in the May 6, 1897, issues of three Lancaster newspapers – the Intelligencer, Morning News, and New Era – and two Paterson newspapers, the Morning Call and Evening News.