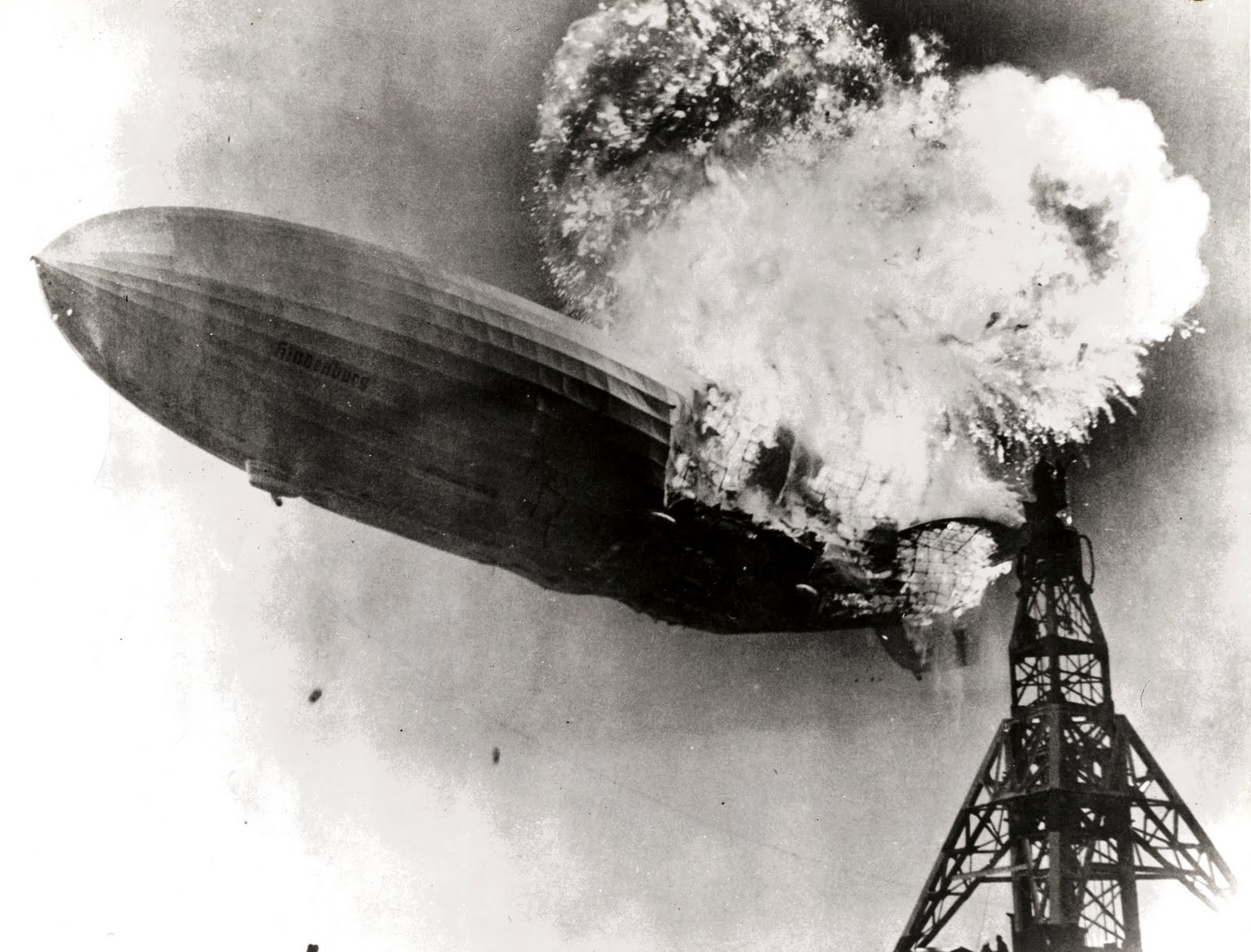 It was called the Ship of Dreams, and its presence thrilled the populace as it flew over New York City on the gloomy afternoon of May 6. But later that day, the excitement that had carried the day turned to shock and disbelief with the news that the famous Hindenburg exploded and crashed to the field in Lakehurst, New Jersey, taking the lives of 35 of its 97 passengers and crew and one member of the ground crew and ending the era of passenger airship travel.

Following the 1936 season, a new era began in Brooklyn with the hiring of new Dodgers manager Burleigh Grimes, who hoped to bring the team its first winning season since 1932. To help improve the team’s luck in 1937, the Dodgers changed their colors, going from their traditional blue-colored caps and lettering to green; however, the thought of a new color bringing a different outcome appeared to not be in the cards during the first month of the ’37 season. When the Dodgers arrived at their home, Ebbets Field, on May 6 to take on the first-place Pirates, they were in their customary second-division position following a string of seven defeats in their last nine games, which could have been worse had it not been for their pitching ace.

Van Lingle Mungo had arrived in Brooklyn at the end of the 1931 season. In 1932, the hard-throwing right-hander recorded 13 wins, and then seemed to improve in each following season. In 1936, he won 18 games, led the league in strikeouts, and was named to the National League All-Star team. Perhaps the biggest win of his career came at the end of 1934, when he defeated the New York Giants on the second to last day of the season to put a dagger into the hated Giants’ pennant hopes.

“The Chucker from Caroline”[fn]Brooklyn Daily Eagle, May 7, 1937.[/fn] began his 1937 season with two losses but bounced back by earning a 3-2 win over the Giants. The Dodgers followed Mungo’s first victory of the season with three consecutive losses, but then “Brooklyn’s Big Strong Streak-Breaker”[fn]Ibid.[/fn] allowed just one run in a 5-1 win over the Phillies. Now he was going to face the first-place Pirates, but according to Tommy Holmes of the Brooklyn Daily Eagle, there was little to fear with Van Lingle Mungo on the mound. “The sheer strong-armed talent of the big guy breeds confidence in his teammates that had been utterly lacking when the other Dodgers pitchers are out there.”[fn]Ibid.[/fn]

At 3:15, the Dodgers took the field before a disappointing home crowd of just 5,857. That total would have been okay for any other home team pitcher, but this was a smaller amount than anticipated for Mungo. On Opening Day versus the Giants, 32,000 filled the stands at Ebbets Field to see Mungo in action. In his other 1937 home outing, 16,000 came out to see him work. Perhaps the reason for this day’s smaller than expected crowd was due to the game being on a weekday afternoon and because of the weather. Although it was a comfortable 71 degrees, the skies to the west were dark.

The first-place Pirates were off to a promising with nine wins in their first eleven games. Leading the way was the great all-around play of shortstop Arky Vaughan, a sweet fielding shortstop and fabulous hitter who led the league in hitting two years before with a .385 batting average. Also in the Pittsburgh lineup was right fielder Paul Waner, who was off to a great start, batting .415 in the season’s early going. First baseman Gus Suhr, hitting .333, was another threat in the potent Pirates attack. Pitching for the Pirates that afternoon was Red Lucas, an underrated hurler who won 15 of his 19 decisions the year before. Five days earlier, he had looked good in pitching a four-hit win over the Reds in his first starting assignment of the season.

The game at Ebbets Field began as a pitcher’s duel. The Pirates couldn’t post a hit off of Mungo through the first five innings. Likewise, Lucas was taming the Dodgers. As the two teams battled on the field, the players and fans suddenly gazed skyward. Several fans began to rise and point to the sky as the mammoth Hindenburg came into view. Its silvery color showed the reflection of the sun peeking through the clouds. The bright red and black swastikas on its tail end gleamed as it hovered less than 1,000 feet over the field. And then the ship headed south for its destination in Lakehurst, New Jersey. Unforeseen to all who saw the ship that day was the pending tragedy that was to take place.

Dodgers infielder Cookie Lavagetto, 24 years old, stepped into the batter’s box to lead off the bottom of the fifth inning. A newcomer to Brooklyn, he had been a benchwarmer during the three previous seasons with the Pirates. Now with a different team, Lavagetto had the opportunity to play every day and show his former manager Pie Traynor and the Pirates that they had underestimated him.

Lucas made his pitch; Lavagetto swung and connected. The crowd let out a loud cheer as the ball traveled to deep left-center field. Two Pittsburgh outfielders backed up until they ran out of room. The ball fell into the stands for a home run to give the Dodgers a 1-0 lead.

The next batter, Randy Moore, singled, and Woody English, who had spent his ten prior seasons with the Cubs, walked. Now with runners on first and second and nobody out, Van Lingle Mungo was at the plate in a bunt situation. But Mungo was no average hitting hurler. He took a full swing and got hold of one. The ball traveled into left-center field, split the two outfielders, and rolled to the fence. Moore scored from second base, and English turned on the burners, rounded third, and crossed home as Mungo checked into second base with a double. Two batters later, Buddy Hassett followed with another hit. Mungo, not very fast, barreled around third. There was a play at the plate until the outfielder lost the handle on the ball, which allowed Mungo to record the fourth run of the inning and Hassett to take second base.

Heinie Manush was the next batter. Now nearly 36, the big guy wasn’t the same player who had hit .349 three seasons before during an All-Star season with the Washington Senators. However, he looked like the Manush of old when he ripped one to the center field exit gate. Hassett easily scored on the hit and Manush, never known for his speed during his career, managed to stretch the hit into a triple.

With five runs scored so far in the inning, Lucas was done for the day, but the Dodgers were not. Veteran Waite Hoyt took the mound for Pittsburgh and began by issuing a walk to the first batter he faced. That brought up Lavagetto for the second time in the inning, but before he got too comfortable the Dodgers attempted a double steal. Pirates catcher Al Todd had a play at second base, but threw wide of his intended target. As the ball rolled into the outfield, Manush scored the sixth run of the frame. Then Lavagetto plated run number seven with another hit.

Mungo came out to start the top of the sixth, his no-hitter still intact. The first batter he would face was Al Todd, the catcher who had heaved the ball away on the double steal attempt during the Dodgers rally. Todd, off to a good start with a batting average of .381, let the first pitch, a fastball, go by; it was one that did not have the usual Mungo zing behind it, which the sportswriters in the press box immediately noted. As Mungo readied to make his next offering, the sportswriters agreed that Brooklyn’s $15,000 a year pitcher either had softened during the rally or was tired from his at-bat and running the bases. While the writers chattered, Todd drove Mungo’s next pitch into deep left field, sending it into the seats for the Pirates first hit and run of the game.

Mungo led off the Dodgers’ sixth with his second hit of the day. Another hit, followed by a double by Hassett, sent the pitcher around the bases to make it a 9-1 Dodgers lead. In the top of the seventh, Arky Vaughn tripled and scored, but that hardly mattered. The Pirates were still seven runs behind.

Mungo allowed three more runs while pacing his way through the last two innings. When he retired a Pirates batter to record the last out of the game, at 5:30 P.M., he had recorded his third consecutive win in a 9-5 Dodgers victory over the Pirates. Two hours later the Hindenburg crashed to the ground in flames at an airfield about 75 miles away.