Herb Score was on his way to stardom in the major leagues. He burst onto the scene after being named Minor League Player of the Year by The Sporting News in 1954. The tall left-hander posted a 22-5 record for the Indianapolis Indians of the American Association. He set a league record of 330 strikeouts over 251 innings. Score added a changeup to pair with his lethal fastball when he arrived in Cleveland in 1955.

He set the record for strikeouts among rookie pitchers with 245, which was also tops in the American League. (The previous rookie mark was set by the Phillies’ Grover Cleveland Alexander in 1911 with 227.) His overall record was 16-10 with a 2.85 ERA, and he was named to the AL All-Star Team by Indians manager Al Lopez. Score was honored as the AL Rookie of the Year by both the Baseball Writers Association of America (BBWAA) and The Sporting News.

But despite their surplus of pitching, the Indians were still looking up at the New York Yankees when the curtain came down both seasons. On August 31, 1955, Cleveland and the Yankees both trailed Chicago by a half-game. The Yankees went 17-6 in September while the Indians posted a 14-9 mark. Chicago faded and the Yankees edged Cleveland by three games in the final standings. Spurred by a 23-6 record in July 1956, New York coasted to a nine-game lead over the Tribe and that was the final margin at the season’s completion.

The Yankees met up with the Tribe on May 7, 1957, at Cleveland Stadium in the first of a two-game set. The Yankees were atop the AL with a 12-5 record while the Indians were 8-8. New York was riding a six-game winning streak. The pitching matchup was New York right-hander Tom Sturdivant against Score.

Score was thus far 2-1 with a 2.04 ERA. He had struck out 10 or more batters in three of his starts. Sturdivant took the hill for the visitors with a 1-1 record.

Hank Bauer was the first batter in the top of the first inning and he grounded out to third baseman Al Smith. Gil McDougald stepped into the box. He lined a 2-and-2 fastball back to the mound, and before Score could raise his glove, the baseball struck him between the nose and righteye. The ball ricocheted to Smith, who threw out McDougald. Score fell to the ground, and players from both teams rushed to his aid. First baseman Vic Wertz ran to the mound as well after taking the throw from Smith. When he got within 10 feet of Score, he turned, shoulders sagging. It was not a good indication of what he saw.

A call went out over the public-address system for a doctor to come down to the field. Score was taken off the field by a stretcher, and subsequently to Lakeside Hospital. “I didn’t see the ball until it was a foot or two from my face,” Score said afterward. “Then I saw too much of it. I never did lose consciousness even as I fell to the ground. I knew I was on the ground and I could feel the blood. Then people seemed to come at me from all sides.”i

The attendance for the game was 18,386. Cleveland broadcaster Jimmy Dudley recalled, “The crowd was in total silence, like a funeral parlor when the priest shows up.”ii

Bob Lemon took the hill in place of the fallen Score. The game had to progress, even if it was played under pallor of gray. For six innings, Sturdivant and Lemon took turns posting zeroes on the scoreboard.

In the top of the seventh inning, Elston Howard led off with a single to left. After a sacrifice bunt by Andy Carey and a groundout by Sturdivant, Howard advanced to third base. Bauer hit a groundball to third, directly at Smith. But the ball took a high hop over Smith and landed in left field. Howard scored and the Yankees led 1-0.

Cleveland evened the score with a tally in the bottom of the inning. Wertz led off with a single to right field. Roger Maris was hit by a pitch. Rocky Colavito laid down a bunt to third baseman Carey. But Carey’s throw to first base was dropped by second baseman Billy Martin. Wertz came home with the tying run and Maris went to third. But the Indians could not add any more runs.

The Tribe took the lead and ultimately won the game in the bottom of the eighth inning. With one out, Gene Woodling nailed a single to center field. Smith popped up to right field. The ball dropped in front of Bauer, who thought Martin was going to make the play; Bauer drew an error from the official scorer as Smith reached first base safely. Sturdivant gave Wertz an intentional pass to load the bases. After Maris struck out, Colavito walked to force in the winning run.

Sturdivant was unfortunately on the short end of the stick in this game. Both Indians’ runs were unearned, and Sturdivant struck out nine Cleveland batters in eight innings of work. Lemon raised his record to 2-3 with the win.

But the details of the game were not on the players’ minds afterward. All thoughts were on Herb Score. McDougald sat by himself in the Yankee clubhouse. He was inconsolable, as he promised to quit baseball if Score did not pull through.iii

Because there was so much hemorrhaging around Score’s eye, a complete prognosis could not be quickly made. Dr. Charles Thomas, an eye specialist, examined Score. “The eye will be saved,” said Dr. Thomas. “It is beginning to clear up. I can’t yet tell full extent of the damage. Because of the eye hemorrhage it is like looking through fog. Fortunately, the ball struck him flush. It caught the top of the eyebrow bone, the cheekbone and nose. The nose was fractured. It appears the bone fracture of his face absorbed most of the impact that would have destroyed the eye.”iv

McDougald, Bauer, and Yogi Berra went to visit Score after the game. But Dr. Thomas ordered quiet and bed rest for Score, and no visitors. “All the Yankees feel terrible because Score is such a nice guy,” Berra said.v

Ann Score, Herb’s mother, lived in Florida and reached out to McDougald to console him. Score said that his injury was a part of the game, and he held no ill will toward McDougald.vi

The Indians swept the Yankees and won nine of their next 10. They got to within a game of the first-place White Sox on May 18, but ultimately finished the season in sixth place. New York ended up winning the American League pennant, but lost to the Milwaukee Braves in the World Series.

Score did not return until early in the 1958 season. He quickly hurt his elbow, though. When he threw his fastball, the pain in his arm was unbearable. He changed his motion, and he was never the same again. “The reason my motion changed was because I hurt my elbow, and I overcompensated for it and ended up with some bad habits,” Score said much later. “I didn’t throw quite as hard before my arm injury. But what killed me was that my ball no longer moved. It went up to home plate as straight as an arrow.”vii

Score pitched eight seasons in the majors and compiled a 55-46 won-loss record with a 3.36 ERA. He struck out 837 batters in 858.1 innings. McDougald played his last season as the Yankees’ starting shortstop in 1957. The transition to Tony Kubek was complete in 1958. McDougald was relegated to a backup infielder’s role once Bobby Richardson and Clete Boyer established themselves at second and third base, respectively.

McDougald had a fine careerviii and he was a member of five world championship and eight pennant-winning teams with the Yankees. Unfortunately, and perhaps unfairly, his career was overshadowed by the batted ball off his bat that struck Score. 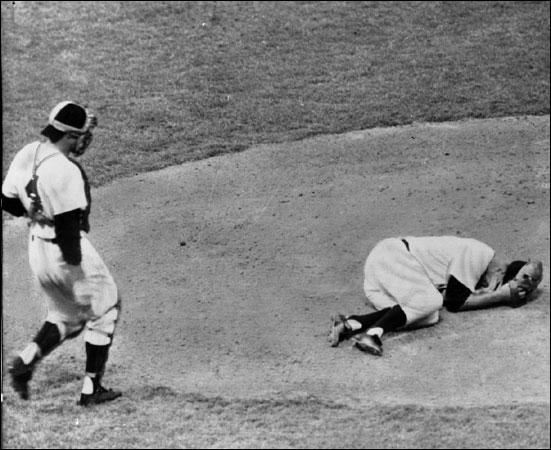 8 Even after McDougald was relegated to a backup role in 1959, he was a member of that year’s AL All-Star team.