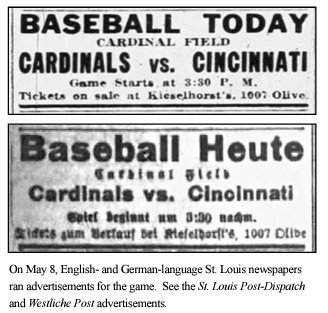 “The outlook wasn’t rosy for the Redland tribe that day;
The score was six to nothing with one inning left to play.
But in the final session they got busy with their sticks,
And when the smoke of battle cleared, the score was nine to six.”1

In New York, the Giants were pulling away from the rest of the National League with a blistering 16-1 start, while in Boston a Red Sox pitcher and part-time first baseman named Babe Ruth was cause for awe by hitting a home run in a record-tying2 third straight game, but the biggest news in the sports pages on May 8, 1918, came out of St. Louis.

The Cardinals’ rising star, Rogers Hornsby, had announced he would be retiring from baseball at the end of the season to care for his invalid mother. “No more baseball, no more jaunting round where I can’t be home of nights,” the 22-year-old shortstop told the press.3

In 1917 Hornsby had finished second in batting in the NL at .327 while leading the league in triples and slugging percentage. Eventually he reconsidered and carried on with the profession that put him in the Hall of Fame, but for this day he was out of the lineup with a pulled groin muscle.4

Filling in for the young star at shortstop was 44-year-old Bobby Wallace, playing in the 25th and final season of his own Hall of Fame career. Wallace had retired from the St. Louis Browns in 1915 to become an American League umpire for a season, then managed Wichita in the Western League before joining the Cardinals as a free agent in July 1917.

The fourth-place Cardinals couldn’t afford to lose a promising batsman like Hornsby. Mired in a collective hitting slump since the start of the season,5 the team had been held hitless for seven innings the day before by the Cincinnati Reds’ Rube Bressler until they broke through in the eighth and rallied to win the game. Except for first baseman Gene Paulette, off to a hot start at .375, no other Cardinals batter had a batting average approaching .300; second-best to Paulette was Hornsby’s meager .273.

By contrast, the Reds were socking the ball for a good average, second in the league behind the heavy-hitting Giants, but poor pitching had the team behind the Cardinals in seventh place. Center fielder Edd Roush, the defending NL batting champion, was off to a slow start at .282, but third baseman Heinie Groh was hitting .324, and second baseman Lee Magee was close behind at .319.

First baseman Hal Chase and his .314 average was out of the lineup for the third of what would be 10 games with a sore shoulder, necessitating a shift to first by Sherry Magee (no relation to Lee). The veteran left fielder would take over as the team’s regular first baseman in August when Chase was suspended for “indifferent play.”6 The notoriously troublesome Chase was dropped by the Reds after the season, charged with offering bribes to teammates and opponents to influence the outcome of games on which he had bets.

For this day’s matchup before 1,200 fans, Cardinals manager Jack Hendricks handed the ball to left-hander Jakie May. The rookie May had pitched almost exclusively in relief since joining St. Louis during the 1917 season, but earned a place in this season’s starting rotation by pitching seven innings of two-hit, scoreless ball in relief against the Pirates on April 23. With a won-lost record of 2-0 and an earned-run average of 1.27, “May’s work since the team came north from Texas has bordered on the sensational.”7

Starting for Christy Mathewson’s Reds was right-hander Pete Schneider. Since tossing a one-hit shutout against the Pirates on Opening Day, Schneider had pitched in poor luck and, despite a 1.57 ERA, took the mound with a record of one win in four decisions.

In attendance at the game was the baseball legend of a previous generation, Adrian “Cap”  Anson, in St. Louis to appear in a theatrical engagement with his daughters, Dorothy and Adele. Members of both the Cardinals and the Reds were invited to be Anson’s guests for the evening’s performance at the Forest Park Highlands amusement park.

The Cardinals scored a run in both the second and third innings against the “wild and ineffective”8 Schneider before driving him from the mound with a three-run rally in the fifth, helped along by a base hit and stolen base by Wallace. Snipe Conley replaced Schneider and successfully put the Cards away, although they scored once more in the sixth. The spitballing Conley had joined the Reds during the offseason after pitching in the Federal League in 1914-15 and winning 27 games, including 19 in a row, in 1917 for the Dallas Giants of the Texas League; he pitched only once more for the Reds before returning to pitch for Dallas.

For their part, the Reds did little at the plate through the first eight innings, knocking out only four singles and never threatening to score. With Cincinnati down by six runs in the bottom of the eighth, Mathewson sent in right-hander Mike Regan, 0-2 with an ERA of 22.85, to mop up for the Reds. Regan retired the Cardinals in order.

Taking the hill for the final frame, May, who had been wild all day, seemed to lose any semblance of control. He walked Roush leading off, then after a single by Sherry Magee, walked right fielder Tommy Griffith to load the bases.

“What’s comin’ off here?” shouted Mathewson from the first-base coach’s box,9 upon which May nicked left fielder Greasy Neale in the back with a pitch, forcing in Roush with the Reds’ first run of the game. May then fell behind 3-and-1 to light-hitting shortstop Lena Blackburne. “It looked like bad baseball”10 when, rather than take the next pitch, Blackburne swung and lined out to center field. With the bases still full and one out, May still couldn’t find the plate, issuing a pass to catcher Harry Smith that forced home Sherry Magee with the Reds’ second run.

Skipper Hendricks pulled May and sent in right-hander Lee Meadows to face Ivey Wingo, batting for Regan. Nicknamed Specs for being the first big-league ballplayer to wear eyeglasses since Will White in 1886, the side-armer Meadows got two quick strikes on Wingo before the batter lifted an easy fly ball to right-center. Converging beneath the ball were center fielder Red Smyth and right fielder Jack Smith, each thinking the other had it, allowing the ball to fall between them with Griffith trotting home. Meadows, appearing “unstable”11 and perhaps rattled, then hit Groh with a pitch. Neale crossed the plate, and suddenly the Cardinals found their lead cut to two runs. With catcher Frank Snyder calling to the bench, “Get him out of there!”12 Hendricks opted to stick with Meadows.

“There were entirely too many ‘ifs,’ ‘ands,’ and ‘buts’ connected with the horrible finish to state in detail what might have happened had Hendricks played his Cards differently,” commented an anonymous St. Louis sportswriter.13 The next batter, Lee Magee, tapped a pitch back to the mound and Meadows fumbled the ball, blowing the chance at a double play. Meadows recovered to toss to first to retire Magee, but Harry Smith scored on the play to cut the Cardinals’ lead to a single run. Roush was walked for the second time in the inning and fourth time in the game, and, with the bases again loaded, a walk to Sherry Magee forced Wingo home to knot the score, 6-6.

The improbable rally continued with Griffith driving a pitch into right field for a single, scoring Groh and Roush and putting Cincinnati ahead. Neale then poked another single to right, bringing home Magee. Blackburne finally “brought the agony to a close”14 by grounding to Wallace, who forced Neale at second.

Five walks, four singles, and two hit batsmen had pushed nine Reds across the plate and turned the tables on the Cardinals. Right-hander Hod Eller was brought in to face the stunned Redbirds in the bottom of the ninth, and set them down in order. Despite it being May’s wildness that ignited the Reds’ incredible comeback, it was the rattled Meadows, unable to put the fire out, who was tagged with the loss; Regan, for his single inning of work, got the win.

“It was the wildest, wobbliest, weirdest windup to a ball game that has been staged on a local lot in years,” wrote one St. Louis sportswriter.15 Cracked another, “They ought to have saved that explosion for the Fourth of July.”16