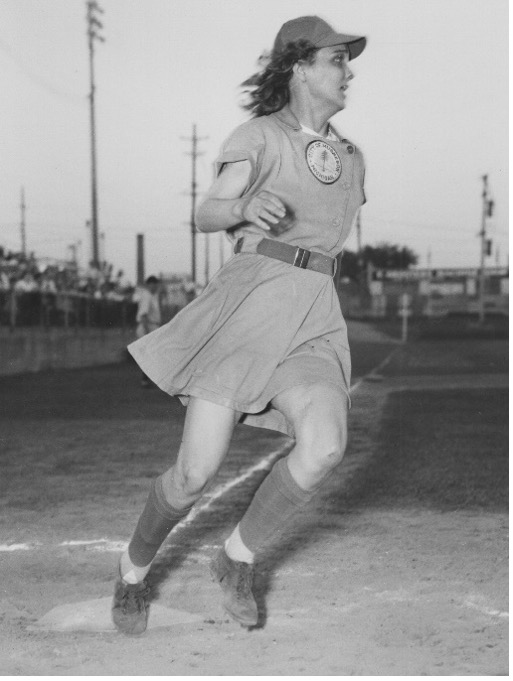 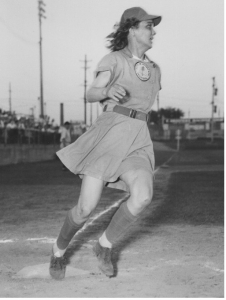 Springfield Sallies hurler Erma “Bergie” Bergmann looked in for the sign from her catcher, Sonia Vialat,1 wound up, and delivered the first pitch of the 1948 All-American Girls Professional Baseball League (AAGPBL) season.2 It’s not known whether the pitch was a ball or a strike, or if it was put in play by Helen Callaghan Candaele of the Fort Wayne Daisies. What is known is that not only was it the first pitch in Sallies franchise history, but Bergmann’s toss ushered in the age of overhand pitching in the AAGPBL, and it marked the official end of the league’s Deadball Era.3

League President Max Carey was keen to eliminate any lingering suspicion that the women’s game was a modified form of softball.4 In 1948 the league introduced overhand pitching, moved the pitching rubber from 43 to 50 feet away from home plate, and reduced the circumference of the ball from 11 to 10⅜ inches.5 Carey defended the regular tweaks to AAGPBL rules. “It has taken men’s baseball 50 years to settle on its distances and rules,” he explained. “We have made tremendous strides in five years and feel that we are well on our way to accomplishing our aims − to bring about the best-looking sports spectacle.”6

After a successful 1947 campaign, the league expanded from eight to 10 teams with the addition of franchises in Springfield and Chicago.

It was no surprise that Springfield manager Carson Bigbee selected Bergmann for the Opening Day start.7 The 23-year-old right-hander was coming off a career year in which she tossed a May 22 no-hitter against the Grand Rapids Chicks and posted a 1.74 ERA for the pennant-winning Muskegon Lassies.8 Since the pitching-rich Lassies could protect only two hurlers in 1948,9 Bergmann was left exposed to reallocation, resulting in her assignment to the expansion Sallies.10

The Daisies’ Opening Day starter was 25-year-old Catherine “Kay” Blumetta. The New Jersey native had come into the league as a first baseman and outfielder in 1944, and she was starting her third season as a full-time pitcher. Blumetta had gone 9-14 with a 2.80 ERA for Peoria and Fort Wayne in 1947.

The Sallies roster was made up largely of rookies,11 and they appeared jittery with more than 4,000 fans in attendance for their inaugural game.12 Fort Wayne took advantage of the situation by pressuring the Sallies defense in the top of the first inning. The game’s first batter, Callaghan Candaele, reached on a bunt single.13 She stole second, went to third on a sacrifice by Vivian Kellogg, and scored on Bergmann’s wild pitch. After Thelma “Tiby” Eisen was hit by a pitch, she stole second and third.14 Eisen scored on Dorothy “Dottie” Schroeder’s single to left field.

Perhaps no player was as nervous as Vialat, Springfield’s 18-year-old catcher.15 The rookie backstop, who was victimized for three stolen bases in the first inning, had just become the first Cuban to appear in an AAGPBL regular-season game.16 Four other Cuban players made their AAGPBL debuts later in the 1948 season.17

In the bottom of the first, Springfield cut the lead to 2-1 when June “Moneybags” Schofield tripled home Doris Neal.

The Daisies continued their aggressive play in the top of the fourth. After Eisen walked and stole second base, Fort Wayne put the hit-and-run on with Schroeder at the plate.18 The 20-year-old star — already in her sixth year in the league — grounded out to shortstop Marge Wenzell. The speedy Eisen kept on running, and she scored all the way from second base, putting Fort Wayne ahead 3-1.

The inexperienced Sallies defense let Bergmann down in the late innings. Fort Wayne scored a single run in the seventh on three Springfield errors. Two more Sallies errors in the top of the ninth led to another unearned run, and the Daisies pulled out in front, 5-1. Three of the five errors were committed by Springfield’s rookie third baseman, Schofield.

Blumetta shut down the Sallies in the bottom of the ninth to earn the complete-game victory. She limited Springfield to five hits and two walks, while striking out seven batters.

Bergmann pitched almost as well as Blumetta, but she was done in by five errors and a whopping eight stolen bases by the Daisies.

Vialat was replaced in the early innings by Dorothy Whalen “in an effort to stave the base thefts,” although it is unclear how many bases were swiped with Vialat in the game.19 Whalen also struggled in her first AAGPBL game, as the rookie from New York went hitless in three plate appearances and was charged with a passed ball. The play of the Springfield catchers was sharply criticized in the Illinois State Journal.20

It was not the first time that Vialat had received negative press. Three weeks earlier, Jim Costin of the South Bend Tribune had been highly critical of Vialat’s defensive skills and her inability to speak English.21 Vialat never appeared in another AAGPBL game. She finished her brief career 0-for-1 at the plate, with no putouts, assists, or errors.22

Terrible weather in the Midwest resulted in all five league games being rained out the next day.23 The Sallies and Daisies wrapped up their abbreviated series on May 11 with a single game, which was won, 4-2, by Fort Wayne.24 The battery of Doris Barr and Whalen managed to hold the Daisies to only two stolen bases. Chilly weather limited the turnout to only 500 fans.

From that point forward, Springfield’s attendance was a major problem, “resulting in practically no cash customers at any game.”25 On June 16 the league decided that at the conclusion of Springfield’s current homestand, it would become a road team for the remainder of the season.26 Like the Minneapolis Millerettes in 1944, the Sallies spent the rest of the season living out of their suitcases.

The Sallies had held their own in the season’s early going − they had a respectable 15-20 record and were only 3½ games out of a playoff spot when the league decided to turn them into road warriors.27 Not surprisingly, the bottom soon fell out of the Sallies’ season, and they went 25-62 (.287) after their final home game. Springfield’s 84 losses set the all-time AAGPBL record for futility.28

Fort Wayne qualified for the playoffs by finishing fourth in the Eastern Division with a 53-72 record. Just before the start of the playoffs, the Daisies fired rookie manager Dick Bass because of a “personal relationship” that he had with one of his players,29 and he was replaced by a triumvirate of player-managers composed of Eisen, Kellogg, and Mary Rountree.30 It was the first — but not the last − time that a woman managed an AAGPBL team.31 The rejuvenated Daisies went on to become the Cinderella team of the playoffs, as they upset Muskegon and Grand Rapids in the first two rounds before dropping the championship series to the powerful Rockford Peaches.

The AAGPBL had reached its apex in 1948, as league attendance hit close to one million fans. Despite the increase at the turnstiles, profits failed to grow, in part because of the two struggling expansion franchises.32 The league reverted to an eight-team circuit in 1949 by converting the Sallies and Chicago Colleens into development teams. The two squads traveled throughout the United States and Canada over the next two seasons playing exhibition games that also helped promote the AAGPBL.33

Since the Springfield team had been repurposed, Bergmann was reassigned to the Racine Belles in 1949. The St. Louis native toiled with the struggling Belles for three seasons before ending her six-year AAGPBL career with a 64-91 record and a 2.56 ERA.34 Bergmann’s knack for getting assigned to the league’s weaker teams prevented her from ever appearing in a playoff game.35

In 1952 she jumped to the rival National Girls Baseball League, a fast-pitch softball circuit based in Chicago.36 Bergman spent one season with the Chicago Bluebirds and the next two with the Chicago Queens.

After her playing career ended, Bergmann entered the police academy. She graduated in 1956, becoming one of the first female police officers in St. Louis. She retired in 1981 after 25 years of distinguished service.37

In 2007 Bergmann was inducted into the Missouri Sports Hall of Fame.

In addition to the sources cited in the Notes, the author consulted AAGPBL.org, The All-American Girls Professional Baseball League Record Book, and Ancestry.com. Standings were referenced in the Kenosha Evening News, South Bend Tribune.

1 Newspaper articles from 1948 referred to her as either Zonia Vialat or Vialat Zonia. She appears in the box score for this game as Zonia. As of December 2021, her name was still believed to be Zonia Vialat. However, three 1948 flight manifests found on Ancestry.com, which are based on travel documents, list her name as Sonia Vialat. The flight manifest from February 25, 1948, lists her full name as Sonia Herrera Vialat. George B. Casey, “4000 See Sallies Drop 5 to 1 Opener to Ft. Wayne; Local Gals Leave 9 on Bases; Outhit Daisies 5-4,” (Springfield) Illinois State Journal, May 10, 1948: 9; Jim Costin, “Blue Sox Break Even in Florida Twin Bill,” South Bend Tribune, April 19, 1948: 18; Zonia Vialat Player Profile, All-American Girls Professional Baseball League, https://www.aagpbl.org/profiles/zonia-vialat/462, accessed December 16, 2021.

11 Five of the nine players in Springfield’s starting lineup were rookies. Four of the five were playing in their first AAGPBL game, while first baseman Mildred Meacham had only two previous at-bats in the league.

16 Eulalia Gonzales was the first Cuban to play in an AAGPBL preseason game. She played for the South Bend Blue Sox and the Racine Belles in the spring of 1947. Gonzales did not play in any regular-season games. Don H. Black, “Havana’s Brightest Diamond Star, Viyalla, Tours with Racine Belles,” Racine Journal-Times, May 7, 1947: 16.

17 The four other Cubans to play in regular-season games in 1948 were Luisa Gallegos, Mirtha Marrero, Migdalia “Mickey” Pérez, and Gloria “Baby Face” Ruiz. Georgina Ríos played in at least one preseason game for the Springfield Sallies in April 1948, although it does not appear that she played in any regular-season games. “Grand Rapids, Racine Tied,” Miami News, April 13, 1948: 27.

21 Vialat had played for the South Bend Blue Sox in the preseason. Costin was normally supportive of the
AAGPBL and its athletes. “Blue Sox Break Even in Florida Twin Bill.”

22 As of December 2021, it was unclear whether she returned to Cuba and few details about her were known.

28 The 1948 regular-season schedule consisted of 126 games, the longest in AAGPBL history. Springfield’s .328 winning percentage (41-84) was not the lowest in league history. According to The All-American Girls Professional Baseball League Record Book, the Battle Creek Belles went 30-79 (.275) in 1951.

29 The player was believed to be 26-year-old second baseman Marge Callaghan. Bass was 43 years old at the time. Browne, 168-69; Sue Macy, A Whole New Ballgame: The Story of the All-American Girls Professional Baseball League (New York: Henry Holt and Company, 1993), 27.

31 The highest-profile example was Mary “Bonnie” Baker (later George), who was player-manager of the Muskegon and Kalamazoo Lassies in 1950.

34 Bergmann played two seasons in Racine and one in Battle Creek. The Racine Belles ceased operations after the 1950 season and the franchise was awarded to Battle Creek, Michigan, where they became the Battle Creek Belles. Keith Brehm, “It’s This Way…,” Racine Journal-Times, February 12, 1951: 13.

35 Bergmann was a member of the pennant-winning Muskegon Lassies in 1947. However, her 1.74 ERA ranked fifth on the team and she did not appear in any of Muskegon’s four playoff games. The Lassies were defeated three games to one in the first round by the Racine Belles.