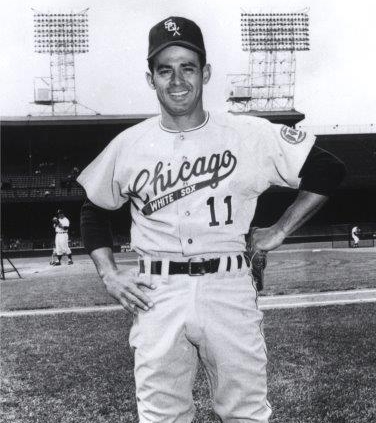 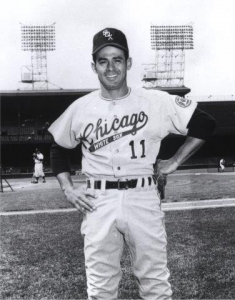 The 1959 White Sox were noteworthy for getting maximum results out of minimal offensive production. That was never truer than on April 22 against the Kansas City Athletics.

With the season in its infancy, the White Sox entered the game at Kansas City’s Municipal Stadium tied for third place in the American League standings with a record of five wins and four losses. They trailed the first-place Cleveland Indians by 2½ games. Kansas City was in sixth place, 3½ games behind Cleveland with a record the opposite of Chicago’s, four wins and five losses.

Chicago had finished second in the American League in 1958, 10 games behind the New York Yankees. The White Sox were led by the double-play combination of second baseman Nellie Fox and shortstop Luis Aparicio and a trio of pitchers, Dick Donovan, Billy Pierce, and Early Wynn. Kansas City had finished the 1958 season in seventh place in the American League with a record of 73 wins and 81 losses, 19 games behind New York. On offense the 1958 Athletics were led by outfielder Bob Cerv (.305/38 home runs/104 RBIs). During the ’58 season the A’s had acquired young slugger Roger Maris (28 home runs, 80 RBIs) from the Cleveland Indians, and the team was hoping to improve in 1959.

Garver mowed the White Sox down one, two, three to begin the game on a groundout by Billy Goodman and fly outs by Fox and Jim Landis. Wynn gave up a leadoff single to Bill Tuttle, who stole second base with Whitey Herzog at the plate and moved to third when Herzog grounded out. Hector Lopez singled to left field to drive in Tuttle with the first run of the game. After retiring Maris, Wynn walked Kent Hadley but struck out Hal Smith to end the inning.

Chicago quickly tied the game in the top of the second inning on doubles by Sherm Lollar and  Jim Rivera. In the bottom half, Kansas City knocked Wynn out of the game with five runs, obtained on run-scoring singles by Garver and Herzog and a three-run home run by Maris. Lopez had seen enough and out came Wynn and in came Bob Shaw, who began what Richard Dozer of the Chicago Tribune called “another magnificent relief effort.”1 At that point in his career, Shaw was primarily a reliever, having started only five games in the previous two seasons while pitching in a total of 53 games for the Tigers and then the White Sox.

Chicago narrowed the gap to 6-5 in the third and fourth innings on a run-scoring double by Fox in the third and a three-run homer by Aparicio in the fourth. It was the Chicago shortstop’s second home run of the season. The light-hitting Aparicio would have just 29 extra-base hits during the season. After Aparicio’s blast, Garver was replaced on the mound by Bud Daley.

Chicago tied the game in the top of the fifth inning. Goodman led off with an infield single and left the game for pinch-runner Sammy Esposito. After Fox had singled, Landis advanced the runners with a sacrifice. The A’s then issued an intentional walk to Lollar to load the bases. Ray Boone, pinch-hitting for Cash, brought home Esposito with a fly ball.

Despite giving up a leadoff double to Maris in the fifth inning, Shaw got out of the inning unscathed. The White Sox then went ahead 8-6 in the top of the sixth. An error on a wide throw by second baseman Hector Lopez allowed Aparicio to streak home with the first run, and Fox drove home the eighth run of the game for Chicago with a single to left.

Tom Gorman assumed the pitching duties for Kansas City at the start of the seventh inning, and what followed is a story perhaps worthy of Ripley’s “Believe It or Not.”

Ray Boone, the first batter, reached first on a throwing error by Joe DeMaestri. Al Smith bunted and was safe when Hal Smith bobbled the ball trying to make a barehanded pickup. Johnny Callison lined a single to right to score Boone, and when Maris fumbled the ball, Smith scored and Callison advanced to third.

Aparicio walked and stole second base and Shaw walked to fill the bases. Gorman was removed from the game after throwing two balls to Earl Torgeson. Mark Freeman took over and walked Torgeson to score Callison.

Fox walked to force in Aparicio with the fourth run of the inning.  Landis forced Shaw at the plate, but Freeman passed Lollar and the fifth run strolled home. George Brunet, the sixth Athletics pitcher of the day, then took over. A walk to Boone saw Fox trot home with the sixth run of the inning. Al Smith walked to score Landis, and Callison was hit by a pitch, scoring Lollar with the inning’s eighth run. Lou Skizas ran for Callison, who had suffered a bruised arm, but nothing more serious.

Aparicio walked to force home Boone. Shaw struck out, but Brunet passed Bubba Phillips and Fox, pushing across the final two runs of the inning. The 10 walks in one inning fell one short of the major-league record, set by the New York Yankees against the Washington Senators on September 11, 1949. (New York walked 11 times in the third inning of the game.) Brunet got the final out of the inning (which took 45 minutes to complete) when Landis tapped a grounder to the mound. The White Sox now held a 19-6 lead. What was truly remarkable was the scoring of 11 runs in one inning on just one base hit.

Chicago scored another run in the ninth without the benefit of a walk to complete the 20-6 win over Kansas City.

The White Sox received 13 walks in the game. Wrote Richard Dozer: “The Chicago White Sox proved again Wednesday night that you can score without hitting. But never before were they so forceful in presenting their case.”2 It was a case that the White Sox — who would win the 1959 American League pennant despite ranking sixth in the league in both runs scored and team batting average — continued to present all season long.

In addition to the game-story and box-score sources cited in the Notes, the author consulted the Baseball-Reference.com and Retrosheet.org websites and the game story by Joe McGuff in the April 23, 1959, Kansas City Times.