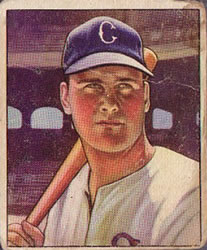 The October 1, 1950, doubleheader between the Chicago White Sox and St. Louis Browns didn’t have much to offer fans in its pregame billing. Both teams were ending dismal seasons in the second division of the American League. These final games of the season didn’t have any consequence for the 1950 campaign in terms of the league standings, postseason play, or league honors. The relatively low attendance of 4,548 was perhaps the best evidence that the game offered little fan appeal.

But what actually emerged in the final contest of the season was a personal-best performance by Gus Zernial, who slammed three home runs in the second game of the doubleheader, after hitting a home run in the first game. The day’s accomplishment would be a preview of seasons to come for Zernial, who wound up among the American League home run leaders of the 1950s.

Entering the three-game series that began on Saturday, September 30, the White Sox held a one-game lead over the Browns for sixth place in the American League. The White Sox took the Saturday game, 8-2, as the 6-foot-2, right-handed-batting Zernial contributed a home run and a single to the cause. Chicago took the first game of Sunday’s doubleheader, 4-3, a walk-off victory, settling the issue of which team would finish in sixth place. Zernial again chipped in by slamming a two-run homer, his 26th of the season.

In the second game of the day, White Sox manager Red Corriden put 19-year-old rookie Gus Keriazakos on the hill for his major-league debut. The right-hander earned a call-up after finishing with an 11-8 record with Memphis.

Browns skipper Zack Taylor countered with eight-year veteran Stubby Overmire as his starting pitcher. The left-hander was 8-12 in his first season with the Browns, after having spent the previous seven years with Detroit. Five of Overmire’s wins had come in his last eight starts.

Keriazakos gave up a single to Browns center fielder Ray Coleman in the top of the first inning without yielding a run, but then ran into a buzz saw in the second, as the Browns batted around, combining four singles and four walks to put across four runs. Singles by Bill Sommers and Overmire and a walk to Dick Kokos drove in the Browns’ runs.

Zernial led off the bottom of the second inning with a home run. Keriazakos tried to help his own cause with a hit but was thrown out at second trying for a double, leaving the score 4-1.

In the top of the third inning, the Browns picked up where they left off on leadoff singles by Hank Arft and Tom Upton. Arft scored on a fielder’s choice by Sommers and an out by Overmire. After Keriazakos issued his fifth walk of the game, Corriden replaced him with Marv Rotblatt, who was making only his ninth major-league appearance.

Overmire had his own problems in the bottom of the third inning. Gordon Goldsberry singled to score Nellie Fox, who had led off the inning with a single. Zernial then homered again, scoring Goldsberry, to close the gap to 5-4.

Kokos hit a solo homer for the Browns in the top of the fourth, making the score 6-4.

After scoreless fifth and sixth innings by both teams, the Browns widened their lead with two tallies in the top of the seventh. Singles by Don Lenhardt and Owen Friend preceded a run-scoring double by Sommers, and Friend scored an unearned run on Goldsberry’s error to make the score 8-4.

In the bottom of the eighth, Zernial attempted to keep the White Sox in the game with his third home run of the day, this time off Jack Bruner, who had replaced Overmire in the sixth inning. Johnny Ostrowski, who had led off with a double, also scored on Zernial’s blast.

However, the Browns scored two more runs in the ninth inning on a two-run home run by Friend, resulting in a final score of 10-6.

Overmire got the win, yielding four runs on nine hits in five innings pitched. Keriazakos took the loss, allowing seven hits and five walks in 2⅓ innings. He would pitch in only 27 more games during his major-league career. Even though the two teams combined for 30 hits, seven walks (all by White Sox pitchers), and 16 runs, the game lasted only 2 hours and 3 minutes.1

Two noteworthy players for the White Sox that day were shortstop Luke Appling, appearing in his last major-league game at age 43, and second baseman Nellie Fox, who was playing in his second full major-league season at age 22. Both players eventually were inducted into the Baseball Hall of Fame.

Zernial, then 27 years old, finished 1950 with 29 home runs, good for fifth place among American League batters. He set a White Sox record for most home runs in a season, surpassing the 27 hit by Zeke Bonura in 1934 and tied by Joe Kuhel in 1940.2 Zernial led the American League with 110 strikeouts, but he also drove in 93 runs.

Years later in an interview, Zernial recalled his record-setting 1950 season. “I hit 29 home runs that year, but I was not really aware that anything special was going on until the season was over,” he said. “Then I read that Zeke Bonura and Joe Kuhel had hit 27. I felt pretty good about it. I was bright-eyed, bushy tailed and a pretty naïve young kid. And here I set a record. It was not an easy park to hit homers in either.”3

With four home runs for the day, Zernial became only the fourth player to accomplish the feat in a doubleheader. Stan Musial broke that mark with five homers in a twin bill on May 2, 1954.4

Zernial probably wished he could have played against the Browns every day of the season, since 11 of his 29 home runs in 1950 came at their expense.

His five-home run performance during the last three games of the season was a prelude to his overall performance in the decade of the 1950s. He led the American League in home runs (33) and RBIs (129) in 1951, when he was traded by the White Sox to the Philadelphia A’s after only four games played as part of a monster 13-player transaction among the White Sox, A’s, and Cleveland Indians.

Zernial is not as recognizable as other power hitters of his era. Part of that comes from the fact that he primarily played for second-division teams, and he was selected as an All-Star in only one season (1953). However, his historic game on October 2, 1950, is among the most memorable in Comiskey Park lore.

1 At the time of this writing in 2018, the length of games was being addressed as a concern by Major League Baseball for maintaining fan interest.  With today’s average in excess of three hours per game, it seems remarkable this White Sox-Browns game could be played in such a short amount of time.