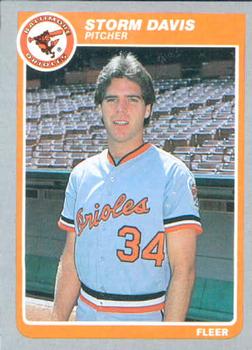 It was a story that could only happen in baseball. On the morning of October 1, 1982, the Baltimore Orioles arrived home from Detroit trailing the Milwaukee Brewers by three games. For Baltimore’s beloved manager Earl Weaver, who had announced in March that he would retire after the season, his final mission at the helm was clear. Win each game of the weekend series with the Brewers and he would lead the Orioles to their seventh division title in his 14 seasons. Lose any of the four games and the Brewers would win their first-ever division title. Long before the season, the major-league schedulers had seen fit to assure that these teams would square off at Memorial Stadium starting with a Friday night doubleheader.

Both teams started the season slowly. Weaver’s impending retirement did not seem to inspire his team and the aging Orioles lost 10 of their first 12 games. On Memorial Day they were in fifth place with a 23-24 record. Milwaukee, managed by Buck Rodgers, was a half-game behind at 22-24. Preseason expectations for the Brewers had been high and owner Bud Selig lost patience; on June 2 he replaced Rodgers with the team’s popular hitting coach, Harvey Kuenn.

Weaver and Kuenn couldn’t be any more different. Weaver started his playing career in the St. Louis Cardinals organization and was never able to make the big-league club. “The only thing I’d ever wanted in my life was to be a major-league ballplayer, but I had to admit to myself that I wasn’t good enough, it broke my heart,” he once said.1 As a manager Weaver was famous for his quick temper and was ejected 97 times during his career.2 He kept his distance from his players because “you’re the person who decides all the worst things in their lives.”3 Weaver was ahead of his time, favoring a combination of pitching and three-run homers. He once stated that ‘your most precious possessions on offense are your 27 outs.”4

Kuenn, on the other hand, had a successful big-league career, finishing with a career batting average of .303. After his playing career ended, Kuenn suffered from several health issues that ultimately led to the amputation of his leg in 1980.5 As a hitting coach for the Brewers, the laid-back Kuenn developed good relationships with Selig and many of the players.

Immediately after the hiring, Kuenn told his players to just go out and have fun.6 Led by the stellar play of MVP Robin Yount, Paul Molitor, and Cecil Cooper as well as the solid pitching of Cy Young Award winner Pete Vuckovich and closer Rollie Fingers, the team responded to the new manager’s style by going 71-40 before the final weekend series. They finished the season with 216 homers and earned the moniker Harvey’s Wallbangers.

The struggling Orioles also needed a spark and Weaver made two decisions that seemed to bolster his team. He moved rookie slugger Cal Ripken from third base to become the starting shortstop. He also inserted 20-year-old Storm Davis into the team’s pitching rotation. Those moves, coupled with the consistent excellence of Eddie Murray and a rejuvenated Jim Palmer, proved to be a successful formula in 1982. Like the Brewers, the Orioles rallied by going 68-43 before the final weekend series.

While pursuing the Brewers, the Orioles found time to honor their beloved manager. On September 19, before 41,127 appreciative fans, the team retired Weaver’s number 4 in a pregame ceremony before taking on the Indians. Fittingly, the Orioles won the game when Rich Dauer hit a walk-off two-run homer in the bottom of the ninth inning. It was Dauer who had coined the phrase “Let’s win for the Duck” as a team rallying cry in reference to his manager’s lame-duck status.7

Despite the excitement created by that game and their hot September, it seemed as if Weaver’s final pennant drive would fall short as the team could get no closer than a game out of first place.

Nonetheless, prior to the first game of the series, it seemed as if Baltimore was bursting at the seams. A raucous crowd of 51,883 poured into Memorial Stadium on that Friday afternoon. John Fairhall of the Baltimore Evening Sun likened it to a World Series atmosphere.8 Two young men carried a banner on which was scrawled “Sweep Four!” around the ballpark. It wasn’t long before the rest of the fans were screaming the message.9 Orioles superfan Wild Bill Hagy stood on top of the home-team dugout folding his arms into a semblance of each letter imploring the crowd to spell out Orioles.10

The Orioles responded to the enthusiasm by chasing an ineffective Vuckovich after 4⅓ innings before winning the first game, 8-3. Trailing 1-0 in the second inning, the Orioles scored three times when, with one out, Jim Dwyer singled, Ripken walked, and Joe Nolan singled, scoring Dwyer. Dauer followed with a hit-and-run groundball. Yount fielded it but his throw to Jim Gantner was too late to force Nolan. Gantner’s relay throw to first was wild, allowing Ripken and Nolan to score.11 The Orioles extended the lead in the third on Ken Singleton’s 14th homer. In the fourth Nolan tripled and scored on Dauer’s double to make it 5-1. The Brewers showed some life in the sixth when Ted Simmons and Ben Oglivie hit back-to-back homers, cutting the gap to 5-3. But Orioles starter Dennis Martinez settled down and in the bottom of the frame Terry Crowley’s pinch-hit single brought two runs home to push the lead back to four runs. Weaver handed the ball to Tippy Martinez in the seventh and he retired eight of the next nine batters to close out the win.

Davis started the second game by retiring Molitor, Yount, and Cooper in order. The Brewers sent Mike Caldwell to the mound. With one out in the first, Dauer reached on his fourth hit of the evening. One out later, Caldwell served a high fastball over the plate to Murray. The future Hall of Famer deposited the ball in the left-field seats for his 32nd homer, giving the Orioles a 2-0 lead. With the crowd whipped into a frenzy, Benny Ayala reached on an infield single and scored on Gary Roenicke’s double, increasing the lead to 3-0.

Davis ran into trouble in the second when he issued three consecutive two-out walks to load the bases. At one point during this stretch, Davis tossed 11 consecutive balls.12 After the third walk, Weaver and team trainer Ralph Salvon paid him a visit.13 “I looked out and saw Mike Boddicker warming up and Earl has a thing late in the season of taking a guy out earlier,” Davis said later. “But Earl just came out and said, ‘Relax and throw the fastball. You’ve got a good fast ball tonight.’”14 Davis took Weaver’s advice to heart, striking out Gantner to end the inning.

In the bottom of the inning, the Orioles continued to feast on Caldwell’s pitching when ex-Brewer Lenn Sakata homered to increase the lead to 4-0. It was Sakata’s 14th career homer and his fifth against his former team. Later in the locker room, Molitor said, “When they got those four runs the crowd got in the game and we were in trouble.”15

The Brewers got on the board in the seventh when Moore led off the inning with a double and came home on Gantner’s one-out single to left. The Orioles again responded in the bottom of the inning. John Shelby hit his first career homer and two batters later Ripken established a new team standard for rookies16 by hitting his 28th, increasing the lead to 7-1. Kuenn lifted Caldwell in the eighth but the damage was done. After a late-season hot streak in which he won 10 of 11 starts while holding opponents to a .215 average and a 0.93 WHIP in his last two starts, the Orioles got to him for 25 hits and five homers.

The score was still 7-1 when Davis allowed a one-out ninth-inning single to Charlie Moore. Weaver once again visited the mound. With the club’s second-largest regular-season crowd ever17 imploring him to let the young starter finish the game, Weaver returned to the dugout. Davis then retired Bob Skube and Gantner to finish the first complete game of his career and cut the Brewers’ lead to one game.

Inside a jubilant locker room Ripken sounded a cautiously optimistic note: “They still have the upper hand. They just have to win one game. But the mood on the club now is not to let them win.”18 The Wisconsin State Journal‘s Bill Brophy wrote, “It was so quiet in the Milwaukee Brewers clubhouse here late Friday night that you could almost hear a division lead vanish.”19 The always optimistic Kuenn said, “I’ll tell my club the same thing I’ve said, play, relax, and have a good time. Why not? We’re still one game up. It will not carry over into tomorrow.”20

Weaver managed the Orioles to an 11-3 win the next day, but the Brewers won the final game of the set, 10-2, on Sunday afternoon, and thus won the division by one game.

In addition to the sources cited in the Notes, the author consulted Baseball-Reference.com for the box score and play-by-play.