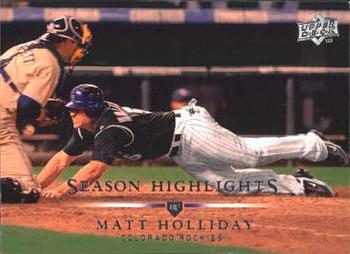 After the full 162-game schedule had been played, the Colorado Rockies and San Diego Padres were tied for second place in the National League West at 89-73. That was better than any other wild-card contender, so a 163rd-game tiebreaker was required to determine the wild-card team. On both September 29 and 30, the Padres had lost potentially clinching games in Milwaukee. The Rockies had won 13 of their last 14 games, to squeeze into the tie on the scheduled last day of the season.

The Rockies had won the season series, going 5-4 in Denver and 5-4 in San Diego. Josh Fogg took the mound for the Rockies in front of a raucous Coors Field crowd of 48,404. He quickly dispatched Brian Giles and Scott Hairston, but after getting ahead 0-and-2 to Kevin Kouzmanoff gave up a bloop single to right. Fogg then got Adrian Gonzalez swinging on a full count to end the inning.

Jake Peavy took the mound for the Padres. Peavy led the league in wins, ERA, and strikeouts that season, and won the Cy Young Award.1 Rockies manager Clint Hurdle had told the media that his team would be aggressive against the Padres ace, and the truth of that statement showed in the bottom of the first.

Second baseman Kazuo Matsui led off by lacing a ball to right-center, sprinting around first, and taking second. Rookie shortstop Troy Tulowitzki, who would finish two points behind the Brewers’ Ryan Braun in NL Rookie of the Year voting, slapped a grounder up the middle from his deep crouch. Padres shortstop Khalil Greene knocked the ball down, but Tulowitzki reached and Matsui moved to third. Matt Holliday approached the plate to deafening “M-V-P!” chants from the crowd, and worked a walk to load the bases. The Rockies then got on the board with a sacrifice fly from Todd Helton. Third baseman Garrett Atkins then dropped a single into shallow right that drove in Tulowitzki and made the score 2-0. Brad Hawpe’s pop fly in foul territory and Ryan Spilborghs’ fly to center ended the inning.

Rockies catcher Yorvit Torrealba’s leadoff home run in the bottom of the second extended the Rockies’ lead to3-0. But Fogg ran into trouble quickly in the top of the third. Peavy smacked a single up the middle past a diving Tulowitzki, and then Fogg walked Giles and allowed a broken-bat single to Hairston to load the bases with nobody out. After Kouzmanoff flied to left, Gonzalez furthered his reputation as a Rockies killer by taking Fogg’s first pitch, a sinker that didn’t sink, into the stands in right field for a grand slam that gave the Padres a 4-3 lead and silenced the crowd. Greene’s single, Josh Bard’s double, and an intentional walk to Geoff Blum loaded the bases again. On Brady Clark’s groundball to shortstop, Tulowitzki fired to Matsui at second for the out, but the throw to first skipped in front of Helton, allowing Clark to reach and Greene to score, and giving the Padres a 5-3 lead.

In the Rockies’ third, Helton smashed a low pitch into the right-field seats, bringing the Rockies to within one run.2 The game settled for a bit after that, as Peavy retired the side and both teams went down 1-2-3 in the fourth inning.

After a leadoff double by Gonzalez in the fifth, Taylor Buchholz took over for Fogg and retired the side.

In the Rockies’ fifth, Tulowitzki doubled and Holliday singled him home with the tying run. This locked up the batting title for Holliday, and tied him with Ryan Howard for the NL RBI lead. A combination of Buchholz, Jeremy Affeldt, and Ryan Speier held the Padres scoreless in the top of the sixth. In the bottom of the inning, the Rockies grabbed the lead again when September call-up Seth Smith tripled to center and Matsui brought him home with a sacrifice fly.

Blum began the Padres’ eighth with a single off new pitcher Brian Fuentes, the ball reaching Cory Sullivan, who had replaced Spilborghs in center. Clark hit a foul pop to the right side, where Helton, who led all NL first basemen in 2007 with a .999 fielding percentage, made an over-the-shoulder Willie Mays-style catch for the first out. Michael Barrett struck out swinging, but a wild pitch on the third strike allowed Blum to make it to second. On a 1-and-1 count, Giles hit a fly ball to left field, where a misplay by Holliday allowed Blum to score and tie the game, 6-6.

Neither team scored in the ninth, 10th, 11th, or 12th, though each had runners in scoring position in the 11th and the Padres did again  in the 12th.

In the 13th inning, Rockies manager Hurdle called on Jorge Julio to pitch to the Padres. Julio walked Giles on five pitches, and San Diego had its leadoff batter on base for the third straight inning. Hairston then drove a ball to left-center. Like a ball Atkins hit in the seventh, the ball appeared to hit the top of the wall. Hairston’s bounced into the stands for a two-run homer. After Chase Headley’s pinch-hit single, Ramon Ortiz came on to pitch for the Rockies — their 10th pitcher of the night — and retired the next three batters.

The Rockies’ predicted win percentage for the game had dropped to 8%.3

As the Rockies came to bat in the bottom of the 13th down by two runs, the fans at Coors Field cheered as loudly as they had all night, donning their rally caps in hopes of swaying the baseball gods. Coming off their stretch drive, the Rockies had cultivated a reputation as a team that wouldn’t give up.

This time they had to overcome Trevor Hoffman, who was at the time baseball’s all-time saves leader.4 First to face him was Matsui, who after two quick balls watched a ball go by him for the first strike, then slapped two fouls down the third-base line. Finally, he smacked a ball into right-center, where it rolled to the wall before Jason Lane, who had come into the game the previous inning, could track it down and fire it to second; Matsui was already there. Tulowitzki, at this point just a home run short of the cycle, worked a full count, then lined a pitch high in the strike zone to left-center, Lane once again firing in to second, where Tulowitzki got in just before the tag, popped up and pounded his fists in elation.5 The Rockies now had the tying run in scoring position with nobody out.

Holliday, who had misplayed the ball in the eighth that allowed the Padres to tie the game, strode to the plate. He went after Hoffman’s first pitch, driving it to right field where it hit the bottom of the manual scoreboard, bounced over the head of right fielder Giles, and ricocheted back toward the infield. Tulowitzki, who held at second until the ball hit the wall, scored easily and Holliday slid headfirst into third with a triple. Padres manager Bud Black then called for Hoffman to intentionally walk Helton, leading to derisive boos from the home crowd. Black and catcher Michael Barrett went to the mound to chat with Hoffman, and Black motioned for the outfielders to come in as shallow as they dared to fend off the winning run on a sacrifice fly.

Jamey Carroll approached the plate, kicked at the dirt, and adjusted his batting gloves. He then swung his bat toward Hoffman a few times, glanced back at third for the briefest of moments, and settled the bat above his shoulder. Connecting on Hoffman’s first pitch, Carroll drove the ball to right field. “I was just trying to get a ball up in the zone,” he said after the game.6 Giles reached over his head to catch it, and at that moment Holliday, who had tagged up as soon as the ball was in the air, put his head down and ran. “The ball appeared to beat Holliday to the plate,” wrote the New York Times.7 Holliday slid headfirst, and his head bounced off the ground as Barrett reached back to tag him. The ball popped loose. Dazed, and with blood dripping down his chin, Holliday lay on the ground for what seemed like an eternity until home-plate umpire Tim McClelland finally called Holliday safe, ending the game and sending the Rockies to their first playoff berth since 1995.8

1 Against the Rockies, however, his record coming into the game was only middling. He’d gone 4-4 lifetime against them, including a 3-3 record at Coors Field.

2 It was only the second time all season that Peavy had allowed more than one home run in a game.

5 Adrian Gonzalez also finished one hit short of a cycle, lacking only a triple.

8 Holliday admitted he didn’t know if he’d been safe or out, blocked by Barrett’s foot. “I don’t know. He hit me pretty good. I got stepped on and banged my chin. I’m all right.” Padres manager Bud Black allowed that Holliday was probably safe, “It looked to me like he did get it.” Associated Press. Ortiz got the win, and the Padres had lost their third consecutive opportunity to clinch.