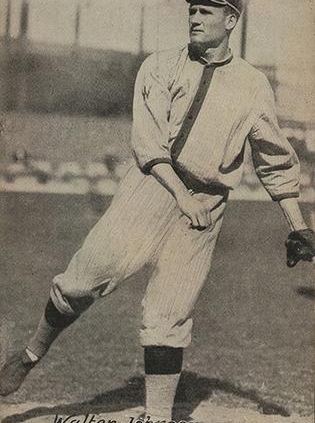 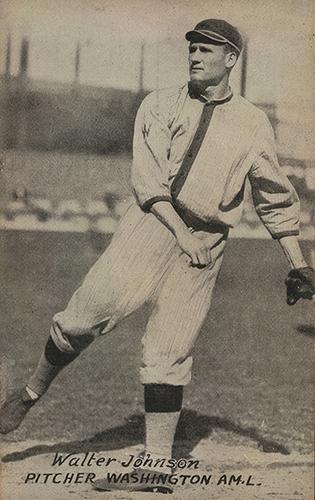 The accolades came pouring in after Walter Johnson’s resounding six-hit shutout of the Pittsburgh Pirates in Game Four of World Series. “Johnson vindicated the judgement of the world that he is the greatest pitcher of all time,” gushed syndicated sportswriter High Fullerton.1 Though Johnson’s performance was not as overpowering as his 10-strikeout, five-hit, 4-1 victory in the Series opener, sportswriters seemed in awe of the Big Train. “The king of pitchers returned to his throne,” mused Chester L. Smith of the Pittsburgh Gazette Times.2 Edward F. Balinger of the Pittsburgh Post raved about Johnson’s “bewildering delivery”;3 “his easy sidearm motion was a delight to watch,” cooed Harry Cross of the New Yok Times;4 while Ralph S. Davis of the Pittsburgh Press lauded his “clever, heady ball.”5

Johnson’s pitching and what Regis M. Welsh of the Pittsburgh Post described as a “relentless attack which combined great pitching, opportune hitting and superior thinking power” put the Washington Senators one win away from capturing their second consecutive title. “The battle along the Potomac has turned into a rout,” continued Welsh, whose Pirates were nominal favorites entering the World Series. “The situation looks darker than midnight in a dungeon as far as Pittsburgh’s chances are concerned,” wrote Balinger poetically.6

Skipper Bill McKechnie’s NL pennant winners were in disarray as they prepared to play the fourth game of the fall classic. They were still smarting from the controversial call on the Senators’ Sam Rice’s acrobatic catch while tumbling into the stands, robbing Earl Smith of a potential game-tying home run in the eighth inning of the previous game. Even more concerning was the Bucs’ offense, described as “pitiful” by Davis.7 Featuring seven starters who batted at least .308, and easily leading the major leagues by averaging 6.0 runs per game, the Pirates had managed only 20 hits (in 96 at-bats) and scored seven runs through the first three games of the Series. The vaunted hitters, opined James B. Harrison of the New York Times, have shown “nothing like the fast whirling attack which tore the National League open from stem to stern.”8 The Pirates had pitching trepidations, too. Game One starter Lee Meadows, who had led the team with 19 wins, was suffering from a sore elbow, reported Smith, forcing McKechnie to send Emil Yde to the mound, a decision that would eventually be lambasted by Smoky City scribes.9 A southpaw, Yde (17-8) had made only one start since September 13.

Unlike the previous cold, blustery, and windy day in the nation’s capital, the weather was not a factor in this contest. On a sunny, though gradually increasingly cloudy Sunday afternoon with temperatures in the 50s, Griffith Stadium was packed with 38,701 spectators.

“The thrills, the chills and enthusiasm of the Saturday’s game,” opined Fullerton, “were entirely lacking.”10 Save for one disastrous inning when all of the runs were scored, the game was about the Big Train. The 37-year-old right-hander finished the season with a 20-7 slate, the 12th and final time he reached the 20-win plateau, pushing his career record to 397-257. He had also showed his age, missing a month of the season and also struggling with leg pain down the stretch.

Johnson was in complete control of this game, yielding only six hits, four of them of the scratch variety to the infield, and not a hard-hit ball. His only scare came in the second inning when Pie Traynor led off with a single to third base, the Nationals’ weakest link. Regular starting third sacker Ossie Bluege, considered among the best fielders in the AL, missed his second straight game after a beaning in Game Two. In his stead was rookie Buddy Myer, who had played only four games all season. Myer knocked the ball down, but was unable to make the throw. Two batters later, George Grantham hit a high, slow bounder to Myer, whose throw was late. Bluege, opined Davis, “would have turned [those hits] into putouts.”11 Johnny Gooch’s two-out grounder pushed runners to second and third, then Yde’s grounder ended the inning. It was the only time the Pirates had a runner on third base.

The game was essentially decided in the third inning when the Nationals combined hard hitting with some good luck. The Big Train, who batted .433 and drove in 20 runs in the regular season, led off with a single. He approached first tentatively, then inexplicably, coach Everett Scott waved him to second, where left fielder Clyde Barnhart “nailed him easily.”12 That play subsequently had consequences for Johnson. Rice followed with a tricky bouncer to second baseman Eddie Moore. Moore stopped the ball but slipped and fell, and was unable to make the throw. Grantham fielded player-manager Bucky Harris’s routine grounder and threw to Glenn Wright, attempting to retire the lead runner. According to sportswriter Charles L. Doyle of the Pittsburgh Gazette Times, the “ball either hit the runner on the shoulder or it crashed against Wright’s arm.”13 In a lefty-lefty matchup, Goose Goslin, who led the club with 18 round-trippers, while batting .334 with an AL-most 20 triples, whacked what speared to be an “ordinary long ball” to Barnhart in left field.14 Bothered by the sun, Barnhart lost track of the ball, which went over his head and bounced into the bleachers for a home run (according to pre-1931 rules, balls that traveled 250 feet and then bounced into the stands were credited as home runs, not ground-rule doubles), giving the Senators a 3-0 lead. It was Goslin’s record-breaking fifth home in World Series competition, eclipsing Babe Ruth’s mark of four. Joe Harris followed with a prodigious blast that landed almost in the same spot as Goslin’s “bounding liner.”15 “Yde looked bad,” declared Davis, “lacked good control, and was forced to groove the ball to get it over.”16 He walked Joe Judge before Johnny Morrison was summoned from the bullpen. The Senators kept the pressure on. After Judge was caught stealing, Roger Peckinpaugh singled and stole second and Muddy Ruel walked before Myer’s weak grounder ended the inning. In a scathing review of the Pirates, Fullerton opined, “A more subdued and heartless ball team seldom has taken the field and two terrific smashes in the third made them groggy and hopeless.”17

Johnson proceeded to give a pitching clinic. “Giving Walter Johnson four runs to work with is something like handing Henry Ford a flivver or presenting Germany another debt,” joked sportswriter Grantland Rice.18 Hurling with a severe charley horse since his ill-fated attempt to stretch out a single, the Big Train did not yield a baserunner in the third, fourth, or fifth inning. While Morrison pitched 4⅔ scoreless innings to keep the Pirates close, Bucs hitters continued their Series-long slump. “Pittsburgh’s batting power has been throttled,” opined Harrison.19 Johnson’s pain was evident when he made no attempt to cover first on Max Carey’s swinging bunt in the sixth; and he had a similar play an inning later on Grantham’s smash to first.20 Traynor led off the seventh with the Pirates’ first clean hit of the game. Reflective of the luck the Pirates had all afternoon, Wright followed with a bullet right at Bucky Harris, who jumped to snare the ball, then doubled up Traynor.

The Senators rallied in the seventh, leading off with singles by Bucky Harris and Goslin. Joe Harris belted a fly to deep left, but Barnhart made a leaping catch to save a potential home run. Two batters later, with runners on first and third and Peckinpaugh at the plate, the Senators tried a double steal. Grantham took Morrison’s throw to first and quickly fired home to nab Harris on a close call that elicited a round of boos from the crowd.21

A “thrill seemed to grip both benches,” declared the Pittsburgh Post, when McKechnie sent Babe Adams to the mound in the bottom of the eighth inning.22 The 43-year-old right-hander had debuted in 1906 and was the star of the Pirates’ only title thus far, when he tossed three complete-game victories over the Detroit Tigers in 1909. After yielding a double and a scratch single, Adams faced Johnson to the delight of fans. Catcher Johnny Gooch picked up Johnson’s easy roller in front of the plate and tagged Ruel at home. Adams then retired Sam Rice to end the innings.

Johnson “didn’t come near approaching the speed he showed in the series opener,” noted Davis, punching out just two batters, but the future Hall of Famer didn’t need to overpower hitters.23 He issued his second walk of the game to lead off the ninth before Traynor hit into a 6-3 twin killing. Wright hit another grounder to Bucky Harris in almost exactly the same spot to end the game in exactly two hours.

Johnson’s gem put the Senators on the precipice of another title. In two games against the Pirates, Johnson had yielded just 11 hits, fanned 12, and walked three. Many wondered if the Big Train had yet another miracle in him, yet hoped that the Senators’ other future Hall of Famer, 20-game winner and ’25 AL ERA-champ (2.84) Stan Coveleski, would make it a moot point in Game Five.

In addition to the sources cited in the Notes, the author accessed Retrosheet.org, Baseball-Reference.com, SABR.org, and The Sporting News archive via Paper of Record, as well as: