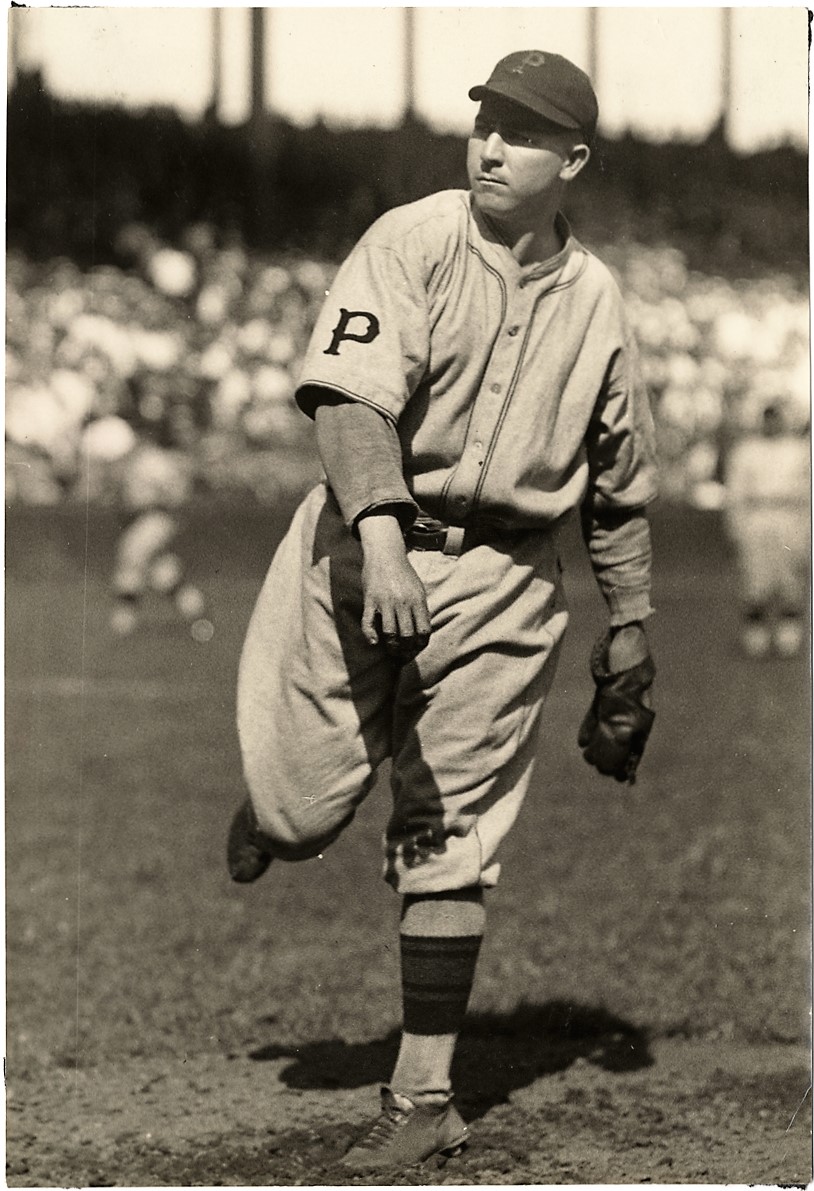 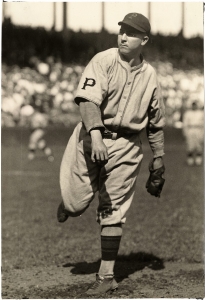 The Pittsburgh Pirates “played headier baseball this afternoon than they have at any time in the series,” gushed Smoky City sportswriter Chester L. Smith, as the NL pennant winners beat the Washington Senators, 6-3, in Game Five of the fall classic to stave off elimination.1 The Bucs’ offense, which had scored only seven runs in the first four contests, finally emerged from its Series-long slump. It was “hard to single out the heroes,” mused another Pittsburgh Gazette Times reporter, Charles J. Doyle, as each of the starting position players hit safely;2 however, one player stood out: pitcher Vic Aldridge. Praised by Smith for his “cool demeanor,” Aldridge tossed his second complete-game victory against the defending World Series champions.3

The Senators, led 28-year-old boy wonder player-manager Bucky Harris, were primed to capture consecutive titles in front of their partisan fans in the third and final game in the nation’s capital. Playing like a “well-oiled machine,”4 they were coming off victories in Game Three, preserved by center fielder Sam Rice’s eighth-inning tumbling catch into the bleachers and ensuing controversial call, and Walter Johnson’s shutout in Game Four. Pirates skipper Bill McKechnie, on the other hand, was searching for answers. The Bucs’ vaunted offense, which led the NL with a .307 batting average and 6 runs per game, had managed just 26 hits and a .205 batting average through the first four games. “The Pirates seemed to be whipped, not only in the box score, but in spirit,” opined sportswriter Westbrook Pegler.5 McKechnie shook things up by replacing starting first sacker George Grantham, who batted .326 in the regular season, but had managed just two inconsequential singles in the Series, with a 34-year-old backup and former World Series star with the Philadelphia Athletics and Boston Red Sox, Stuffy McInnis.

The pitching matchup featured a repeat from Game Two. Aldridge, known as the Indiana Schoolmaster because of his former job, had posted a 15-7 slate during the regular season (68-50 career). He owned the Pirates’ only Series win, a complete-game eight-hitter, 3-2, over Stan Coveleski. On paper, at least, the Senators had the advantage with their 36-year-old future Hall of Famer, the spitballing “Covey,” considered among the best hurlers of the era with 194 victories at the time. In his first season with the Senators, he won 20 games for the fifth time and led the AL in ERA (2.84) for the second time in three years. Coveleski was also a World Series hero, having tossed three complete-game victories to lead the Cleveland Indians to the title in 1920.

Griffith Stadium was packed with 35,899 spectators, including President Calvin Coolidge, for the 2 P.M. start time on Monday despite the “dull, leaden skies, with rain threatening at any minute,” noted syndicated sportswriter Hugh Fullerton.6 From the outset, the Pirates looked like a different team as they attacked Coveleski. After Max Carey and Kiki Cuyler hit consecutive one-out singles, left fielder Goose Goslin made a “spectacular catch,” opined Pirates beat reporter Edward F. Balinger, to rob Clyde Barnhart of a potential extra-base hit.7 (Goslin repeated the gem the next inning, snaring McInnis’s liner on the run.) Pie Traynor walked to load the bases, but the Senators, who had seemingly caught all the breaks in the Series thus far, had more good luck. Glenn Wright’s liner back to the mound “almost wrenched the glove from Coveleski,” noted scribe Pegler, but the ball caromed to Bucky Harris at second, who made a quick throw to nab Wright at first, ending the threat.8

Like his mound mate, Aldridge was battered in the opening frame. Rice led off with a single and moved up a station on Bucky Harris’s sacrifice bunt, then scored on Goslin’s Texas Leaguer along the foul line in short left field, stretching it to a double. Joe Harris coaxed a two-out walk, but both runners were left stranded.

Coveleski labored in the third. “It was evident from the second pitched ball,” mused Fullerton, that he “had nothing;”9 while sportswriter Harry Cross of the New York Times observed that “his wet ones did not have the hop and deception.”10 With one out Carey walked and then stole second, colliding violently with Harris, who was “momentarily injured.”11 The ball was jarred from Bucky’s glove and squirted into center field, but Carey was unable to advance. Senators gathered around their skipper, who was rubbing his shoulder, but he remained in the game. After Cuyler drew another walk, Barnhart singled to drive in Carey and tie the game, then Traynor’s sacrifice fly gave the Pirates a 2-1 lead.

The Pirates rallied again in the fourth. With two outs and runners on first and third, Senators first baseman Joe Judge produced “one of the most brilliant plays of the series,” according to sportswriter Regis M. Welsh of the Pittsburgh Post, to save a run.12 Judge “dove frantically” to snare Carey’s hard bounder over the first-base bag, according to Smith, stopped the ball with his glove, then “lying on his stomach” crawled several feet and touched the base with the ball.13

In the fourth the Senators pounded Aldridge, who like Coveleski seemed to lack his best stuff at this point. Joe Harris led off with a home run into the left-field bleachers to tie the score. His third round-tripper of the series tied a World Series record set by Babe Ruth (1923) and equaled by his teammate Goslin in 1924. After Muddy Ruel and Ossie Bluege, playing for the first time since he was beaned in Game Two, connected for a single and double, respectively, to move into scoring position with one out. At this critical juncture, McKechnie motioned for reliever Tom Sheehan to start warming up while Harris decided to let the struggling and weak-hitting Coveleski bat; it was a decision roundly castigated by sportswriters the next day. Coveleski fanned and then Rice grounded out, ending the threat.

Coveleski, like Aldridge, hurled a clean fifth and benefited from a double play to end the sixth, but met his demise in a disastrous seventh. With one out, he walked Eddie Moore, Carey singled, and then Cuyler grounded “through Bluege’s legs” to give the Pirates the lead again, 3-2.14 Coveleski was bothered by “fleetest runners in modern baseball” on first and third, according to Welsh.15 Barnhart followed with another single, driving in Carey and sending Coveleski to the showers. In came rookie reliever Win Ballou, who had logged only 27⅔ innings during the regular season. On his third strike to fan Traynor, Ruel caught Cuyler off third, attempting to steal home.

As they had all Series, the Senators responded to the Pirates’ tallies. Pinch-hitting for Ballou, Nemo Leibold led off with a double and then scored on Rice’s single. Once again on the ropes, Aldridge “closed in upon the American League champions with a grip of steel,” gushed sportswriter Grantland Rice.16 After Harris executed a sacrifice bunt, Aldridge dispatched the Senators’ most dangerous sluggers, Goslin and Joe Harris, sandwiched around a walk to Judge.

The Pirates’ offense was a “continual fusillade” in the final two innings, wrote Rice.17 Wright led off the eighth with a double down the left-field line off Tom Zachary (12-15). A left-hander whose 33 games started tied for the AL lead, Zachary was the odd man out as Harris leaned on his aces, Johnson and Coveleski, in the World Series. Standing out “like a beacon light” for his leadership, according to Doyle, Stuffy McInnis singled home Wright to give the Pirates a 5-3 lead. In the final frame, with Barnhart on second and Traynor on first via a walk and single respectively, Wright greeted Firpo Marberry, the Nationals’ fourth reliever of the game, with an RBI single.

Described by Damon Runyon as the “bulldog of baseball,” Aldridge cruised through the eighth and ninth innings, retiring all six batters he faced and completing the game in 2 hours and 26 minutes. Aldridge’s coolness under pressure was resolutely praised by reporters. In twirling his second complete-game victory of the World Series, Aldridge yielded eight hits, walked four, and struck out five, while permitting only two hits in nine at-bats with men in scoring position. As important as Aldridge’s hurling was the re-emergence of the Bucs’ offense. The thus-far dormant Pirates batters collected 13 hits, including five in 12 at-bats with runners in scoring position; in a balanced attack, five different players knocked in at least a run and five also scored at least one.

With their 6-3 victory the Pirates rekindled their aspirations for their first World Series championship since 1909. In order to do so, they would have to accomplish what had never been achieved in World Series history to that point: overcome a three-games-to-one deficit. Returning to Pittsburgh for Game Six and a potential Game Seven, the Pirates were suddenly brimming with confidence.

In addition to the sources cited in the Notes, the author also accessed Retrosheet.org, Baseball-Reference.com, SABR.org, and The Sporting News archive via Paper of Record, as well as:

5 Westbrook Pegler, “Capital Tearfully Turns Again to Scoreboard as Superstition That Bucs Are Sure Death to Lefthanders Gets Confirmation,” Pittsburgh Post, October 13, 1925: 11.