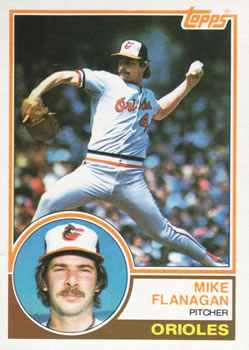 With the 1983 World Series knotted after two games, Philadelphia played host for Game Three. Both teams were concerned about their offense as the key hitter in each lineup was in a slump. Eddie Murray of the Orioles had been hitless since his single in the first inning of Game One. More importantly, he failed to produce in key situations. In Game Two when the Orioles took the lead in the fifth, he flied out to center with the bases loaded to end the inning. The Phillies’ Mike Schmidt was hitless with three strikeouts in eight at bats.

Phillies manager Paul Owens was concerned enough to make the unprecedented move of benching star first baseman Pete Rose and replacing him in the lineup with Tony Perez. “I got to do something to get more offense. I’ve got a good feeling on Tony,” said Owens. 1 Rose was so upset about the benching that he refused to talk to the press before the game except for a taped interview with broadcaster Howard Cosell. “Sure it hurts,” Rose told Cosell, “And it’s embarrassing.” 2

The slumping offenses were not going to have it easy due to the scheduled starters. Two former Cy Young award winners were facing off for the first time in World Series history. Despite spending time on the disabled list, 1979 winner Mike Flanagan of the Orioles had fashioned a fine year. The veteran pitcher had won 12 of his 20 starts and was healthy for the postseason. Four time winner Steve Carlton of the Phillies ended his season winning the 300th game of his career. The only concern prior to the game was his health. Removed with a stiff back after six innings in Game Four of the National League Championship Series, manager Owens had elected to rest him until Game Three.

On this cool and windy night, Carlton dominated early. He cruised through the first three innings facing the minimum nine batters. The only base runner, a lead off walk to Todd Cruz in the third, was quickly retired on a ground ball double play off the bat of Rick Dempsey. Carlton’s signature slider seemed to be working as he struck out seven batters but his control was off, as he walked three batters and threw two wild pitches. This was probably a sign of his back issues as he was not able to bend properly and was more upright during his delivery. The cracks started to appear in the fourth as the first three Oriole batters reached base. John Shelby led off with a single up the middle and then Carlton walked Dan Ford and Cal Ripken to load the bases. Murray stepped to the plate with a chance to break the game open, but on Carlton’s first pitch he popped up to second base. Carlton went to a full count on Gary Roenicke before retiring him on ground ball double play to end the inning.

Flanagan was not as successful as Carlton in his four innings of work. Gary Matthews hit a lead off home run in the second putting the Phillies on the board. It was the Phillies’ fourth solo home run of the series. The power bats were working but nothing else was, as all runs scored were on the homers. Batting next, Perez justified the faith that Owens had placed in him by lining a single to center. Three batters later, Ivan de Jesus singled but Carlton grounded out to end the inning. In the third, lead off hitter Joe Morgan struck another solo homer lengthening the lead to two. The Phillies were able to collect a walk and two more singles off Flanagan through the fourth inning.

With Carlton on the mound and a scarcity of offense in the Series, a two run lead looked insurmountable. He cruised through the first two batters in the fifth and then allowed a double to Dempsey. Orioles manager Joe Altobelli then had to make a strategic decision with Flanagan due to bat. He chose to pull Flanagan and use Ken Singleton as a pinch hitter. The move didn’t work as Carlton retired Singleton on a called third strike. With Flanagan out of the game, Altobelli would have to rely on his bullpen to pitch the last five innings. The first relief pitcher summoned was another former Cy Young award winner, Jim Palmer. Nearing the end of his Hall of Fame career, Palmer had pitched in only 14 games due to numerous injuries. It was the first season since 1968 that he failed to make 20 starts. During his two stints on the disabled list, rookies Storm Davis and Mike Boddicker had replaced him in the starting rotation, hence his role in the bullpen. After retiring the Phillies in the fifth he returned to the bench with a message for his teammates. “I told the guys on the bench to get me some hits, that I hadn’t won a World Series game since 1971.” 3

The team responded to Palmer with some timely hits over the next two innings. Ford stepped to the plate in the sixth anticipating a slider. When Carlton started with a slider, Ford connected with a long home run to left field. “I guessed right, that’s all,” said Ford. 4 The Orioles were on the board and starting to feel confident. Palmer returned for the sixth inning looking to maintain the deficit at one run. He allowed a two out single to Bo Diaz and walked de Jesus on five pitches. With Carlton due up, Owens now had the same decision to make that Altobelli had in the fourth. Should he pull Carlton for a pinch hitter or allow him to hit and keep him in the game? In an unprecedented move, Owens emerged from the dugout to speak with Carlton in the on deck circle. After conferring, Owens left him in to hit. Palmer struck him out to end the inning.

Carlton returned to the mound for the seventh inning and the Orioles took the lead. Dempsey smoked another two out double and Benny Ayala was sent in to hit for Palmer. After a wild pitch moved Dempsey to third, Ayala stroked a single to left scoring Dempsey with the tying run. Owens slowly made his way to the mound, removed Carlton, and brought in Al Holland to pitch. Shelby greeted Holland with a base hit, keeping the inning alive and sending Ford to the plate. With the count 1 and 2, Ford hit a blistering shot to short that skipped off de Jesus’s glove and rolled in to left field to score Ayala with the go ahead run. A drenching rain the previous day had left a few wet spots on the turf. “It was wet around there, towards second base, a little bit,” said de Jesus. 5 Still, he was not one to make excuses. “That’s a ball I’m supposed to catch.” 6

Sammy Stewart and Tippy Martinez pitched the last three innings for the Orioles, allowing only one base runner. Striking out three, Stewart was especially dominant in his two innings of work. Palmer’s first World Series win since 1971 propelled the Orioles to a two games to one Series lead. The Orioles sensed that one of the keys to winning the Series was to beat Carlton at Veterans Stadium. “We figured that if we beat the backbone of their pitching staff we’d be in good shape,” said Ford. 7 Watching from the mezzanine, White Sox manager Tony LaRussa liked the Orioles’ chances. “I felt that somebody had to do something extraordinary this weekend to take charge of this thing. Beating Steve Carlton tonight was that extraordinary thing.” 8 The Phillies had two more games at home to regain the momentum and return the series to Baltimore.

In addition the sources cited in the Notes, the author consulted the play-by-play information included with the box stores of this game at Baseball-Reference.com and retrosheet.org websites.