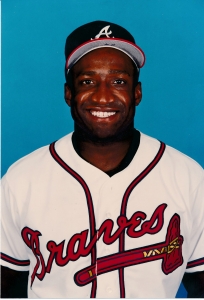 After winning their fourth division title in 1995, the Atlanta Braves were on a quest for their first World Series championship, having captured three division titles but losing two World Series in the first half of the decade. Their chances were looking optimistic after they defeated the Colorado Rockies in four games in the Division Series and winning the first three games of the Championship Series against the Cincinnati Reds. Then they completed the sweep of the Reds largely through the efforts of Steve Avery and Mike Devereaux, who weren’t the usual headliners of the team.

During the first three wins against the Reds, the Braves managed to limit the strengths of the Reds’ offense: the ability to hit home runs (third in the NL) and steal bases (first). Future Hall of Fame starting pitchers Tom Glavine, John Smoltz, and Greg Maddux, aided by relievers Greg McMichael, Alejandro Pena, and Mark Wohlers, had held the Reds to five runs. The Reds hadn’t hit a home run in the series and were prevented from stealing bases in two of the games.

With his team down three games to none, including two extra-inning games the Reds could have won, manager Davey Johnson expressed concern before the fourth game that the players had been pressing too hard.1 They had finished second in the league in runs scored and slugging percentage, so they weren’t accustomed to being held to meager offensive production.

While Braves manager Bobby Cox considered starting Glavine again in Game Four, he settled on left-hander Avery, who had just completed the worst season (7-13, 4.67 ERA) since his rookie year in 1990. Although he had shown improvement in his last three regular-season starts, Avery was still dropped from the rotation for the NLDS against Colorado. He made two brief relief appearances. However, Avery was no stranger to the playoffs, having been named the MVP of the 1991 NLCS against Pittsburgh and having started four World Series games in 1991 and 1992. Before the fourth contest against the Reds, Avery said, “I really wanted to pitch in this series. I’ve been throwing the ball well for the last couple of weeks and I feel I am ready.”2

Devereaux, who had been acquired from the Chicago White Sox six weeks before to serve as a platoon player, got the start in right field in place of David Justice, who had reinjured his knee in batting practice. Devereaux had also gotten starts in left field in Games Two and Three in order to get another righty (instead of Ryan Klesko) in the lineup against Reds lefties.

Left-hander Pete Schourek got the start for the Reds. He had pitched well against the Braves in Game One, yielding only one run on six hits in 8⅓ innings, while striking out eight in a no-decision. He had been 18-7 with a 3.22 ERA during the regular season and would finish as runner-up for the Cy Young Award.

Steve Bedrosian, the Braves relief pitcher who had been released in August, returned to the Atlanta stadium to throw out the ceremonial first pitch. A favorite of Braves fans, he had two stints with them during his 14-year career, 1981-1985 and 1993-1995.

Avery and Schourek were locked in a duel for the first six innings. The only score came in the bottom of the third when Mark Lemke drove in the Braves’ first run with a single that scored Rafael Belliard. Lemke’s hit came at an opportune time, considering that he had gotten only six hits in 34 plate appearances in the previous playoff games. The run would turn out to be the only one the Braves needed.

Schourek gave up eight hits, but had only one other difficult inning, the fifth, when he worked out of a bases-loaded jam.

Avery demonstrated that he was indeed ready for the Reds as he predicted. He struck out six and gave up only two hits and three walks in his six innings. He allowed only one runner past first base.

McMichael replaced Avery in the top of the seventh with his third relief appearance and retired the side in order. The reliever had already picked up a save and a win in the two extra-inning games.

Michael Jackson relieved Schourek in the seventh and immediately ran into trouble. Grissom led off with a triple and scored on a passed ball with Fred McGriff at bat. Devereaux came through with a three-run homer to widen the lead to 5-0. His excitable sprint around the bases didn’t give Braves fans much time to savor the moment.3 The Braves’ final score came on Luis Polonia’s infield single off Dave Burba that scored Lopez.

Pena and Wohlers closed out the eighth and ninth innings for the Braves to complete the shutout and clinch the National League pennant for the fourth time in five seasons.

The Braves’ pitching staff had led the league in ERA and WHIP during the regular season. They were again outstanding throughout the series as they recorded a 1.15 ERA and 1.026 WHIP. Atlanta turned eight double plays in the series, including three in the final game.

Devereaux’s performance earned him the Championship Series MVP Award. It was the only time he was recognized with such an honor during his 12-year major-league career.

Reds first baseman Hal Morris offered his explanation of the rout of his usually powerful team: “They’re definitely a cut above anyone else in our league and probably in baseball. I’m just amazed we didn’t score more runs. Some of it was bad luck, but the majority of it was the excellent job their pitching staff did.”4

The Braves were the first team to sweep a Championship Series since the best-of-seven format began in 1985. The Atlanta Constitution referred to Cincinnati as the “Big Dead Machine” for being swept.5 This was a takeoff of the Big Red Machine label they earned during their dynasty seasons in the 1970s.

Reds manager Johnson had high praise for his opponent, saying, “This is the strongest team they’ve had in the last few years. It is the best bullpen they’ve had since I can remember. Everybody knows about their starting pitchers and they are pitching better than they have ever pitched. They’ve held a very explosive club under two runs per game.”6 Johnson, whom the Reds’ front office planned to replace as manager by Ray Knight the next season, called his team “the best bunch of guys I’ve ever had to manage.” He added, “The future looks bright for Cincinnati, with or without me.”7

In a raucous clubhouse after the game, Braves owner Ted Turner celebrated as champagne was poured over his head while his players danced around him.8 The celebration wouldn’t end there. The Braves went on to win the World Series in six games against the Cleveland Indians. The only two previous Braves franchise World Series championships had come when the team was located in Boston in 1914 and Milwaukee in 1957.