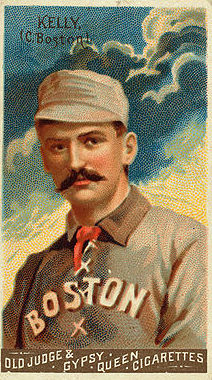 From mid-July until the final days of the 1889 season, the National League pennant race was a fierce, two-team battle, with the Boston Beaneaters, led by workhorse pitcher John Clarkson and team captain Mike “King” Kelly, trying to unseat the defending champion New York Giants from their throne.

At the end of play on September 26, with little more than a week left in the season, the two teams were deadlocked with identical 78–42 records. Over the next three days, Boston won two of three, while New York won one and tied two. The two teams were both 37 games over .500, but the Giants held first place with a winning percentage of .653 (79–42), barely ahead of the Beaneaters’ .650 (80–43).

As the teams headed into the October home stretch, the final five days of the season would be decisive. And New York stumbled right out of the gate, losing to Pittsburgh, while Boston beat Cleveland. The Beaneaters were back in command, 81–43 versus 79–43. The 1889 National League pennant was theirs for the taking. But then came October 2, 1889, the decisive day of the race. New York was playing Pittsburgh for the last time, while Boston was wrapping up its series in Cleveland. The Giants won their game, beating the Allegheny team, 6–3. For Boston, though, a huge drama was about to unfold, one that would ultimately cost it the pennant of 1889.

Pitching for Cleveland was Ed Beatin, a 23-yearold who had shut out the Beaneaters on consecutive days back in mid-September. He would be going up against the fantastic but overworked Clarkson, making his 70th start of the season for Boston. Clarkson, who had already logged nearly 600 innings pitched en route to an incredible 49–19 record, had started the Beaneaters’ previous six games and 11 of their previous 12.

The biggest news of the day, though, was that the Beaneaters’ captain—right fielder Kelly—claimed to have injured a finger in pre-game catching practice and would be relegated to a seat on the bench.1 However, it was clear to all of the onlookers that Kelly was “considerably under the influence of liquor.” Although dressed in his Boston uniform, Kelly sat on the Cleveland bench next to the Spiders team manager.2

Through the first three innings of the tense match, neither team could manage a single hit, let alone a run. Clarkson retired the first nine batters he faced, while Beatin allowed only one walk. In the top of the fourth inning, though, the Spiders hit Clarkson hard, scoring three runs on a double and three singles. At this point, Kelly began shouting at his own teammates. “You never win,” he said with characteristic modesty, “when I don’t play. Kelly is king. I am a king.” No attention was paid to his little pleasantries, which were muttered at times and shouted at others.3

Cleveland scored two more in the top of the sixth so that when Boston came to bat in the bottom of the sixth, they were in a desperate situation. With one out, Clarkson was walked by Beatin. Hardy Richardson followed with a hard hit to right field. On his way to scoring Boston’s first run of the game, Clarkson fell rounding third base, making it appear that he would have to go back to third, so Richardson returned to secnd. After another walk issued by Beatin, Billy Nash singled to right field. Richardson had plenty of time to score, and “did so as clearly as ever a man did.” But when umpire John McQuaid declared Richardson out on the throw home, it seemed to paralyze the visitors. The Cleveland spectators themselves did not believe Richardson was out “till he informed them himself.”4

When the inning ended (with no more scoring for Boston), Kelly sprang from his seat on the bench and “strode toward McQuaid with blazing eye and inflamed face.”5 He accused McQuaid of being a robber, charged him with having said he would give the Bostons a “roasting,” and finally made a motion as if to hit him. McQuaid called a police officer and told him to remove Kelly from the grounds. The officer at first tried to reason with Kelly, but this only added to Kelly’s anger. Breaking away from the officer, he again approached McQuaid in a threatening manner, but he was prevented from doing so by several additional officers, who, “with drawn clubs, made a ridiculous display of their power over one man.” Kelly struggled, but he was ejected from the grounds.6

“Lighting a cigarette, he strode into the street with the dejected air of Napoleon in exile.” Kelly attempted to enter the Payne Avenue grounds again, but the gate was locked, and the fence was too high to vault. Small boys harassed him, and the fans in the bleachers suggested that he buy a ticket and return to the grounds through the turnstiles.7

Boston team manager James Hart stated after the game that certain men in Cleveland induced Kelly to get drunk, so that he would make a scene at the grounds and thus give the policemen an excuse for ejecting him. The Cleveland club vehemently denied Hart’s story; Kelly, they said, became intoxicated on his own, and he alone was to blame for his actions.8

As for the game itself, Cleveland added a couple more runs in the top of the eighth to put the game away for good. With the loss, Boston again fell behind New York by mere percentage points, .650 (80–43) to .648 (81–44). But it was a deficit from which the Beaneaters would never recover, as the Giants won their final three games to clinch their second consecutive National League pennant. 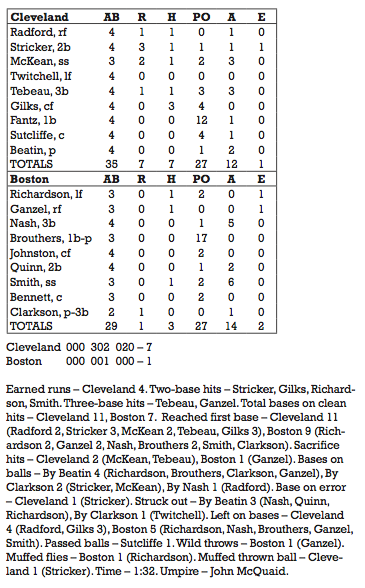