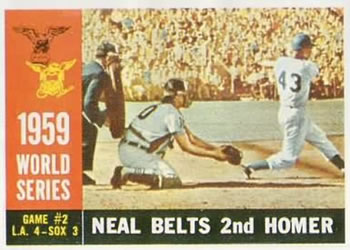 A swarm of excited White Sox fans converged on the South Side ballpark’s neighborhood to wait overnight for the bleacher gate to open at 8 A.M. on Friday, October 2, 1959. Through an intermittent drizzle, they passed the time by watching television, ringing cowbells, and playing bridge.1 A male foursome from Pearl City, Illinois, even asked for their names to be put in the newspaper, so their spouses would believe they had ventured to the city to attend Game Two of the World Series.2

Los Angeles manager Walter Alston had watched the Dodgers lose the Series’ first game, 11-0, the day before, and he did not want to go down two games before jetting back to the West Coast.  Alston tabbed left-hander Johnny Podres, the pitching hero of the 1955 world champions, to start Game Two. During the regular season, Podres posted a 14-9 mark with a 4.11 ERA. Podres, just turned 28, struggled at the Los Angeles Coliseum, but was 10-4 on the road. White Sox skipper Al Lopez selected 26-year-old Bob Shaw as his starter. The right-hander came of age in ’59 with an 18-6 record and 2.69 ERA.

With Senator John F. Kennedy a guest in Mayor Richard J. Daley’s field box,3 the crowd of 47,368 cheered loudly when the White Sox took the field. Earlier, a steeplejack scaled Comiskey Park’s 100-foot center-field flagpole to figure out why the American flag reached only half-staff for Game One. She diagnosed the problem as a defective pulley and repaired it.4 Nerves got the best of singer Nat King Cole when he erred on the words slightly at the end of the National Anthem. “I realized too late I had made a mistake and I couldn’t go back,” said Cole.5

Shaw retired the first two Dodgers before Wally Moon and Duke Snider stroked consecutive singles. Norm Larker stranded the pair when he lined out to McAnany in right. White Sox leadoff batter Luis Aparicio was kept off the bases the day before, but this time he bounced a double past first base and moved to third on a fly ball to right by Nellie Fox. Jim Landis walked, and rookie right-hander Larry Sherry got up to throw in the Dodgers’ bullpen.6 Ted Kluszewski strolled to the plate accompanied by deafening cheers from the White Sox faithful. He bounced a sure double-play grounder to the right side, but second baseman Charlie Neal bobbled the ball.  Neal managed to throw Kluszewski out, but Aparicio sped home with the first run and Landis went to second. Lollar hit a spinning grounder that squibbed past Neal and allowed Landis to race home with another tally.7 Al Smith smashed a hot shot to shortstop Maury Wills, who fumbled it for an error. Podres got Phillips to ground into an unassisted force out at third to escape the first frame down 2-0.

Both hurlers worked out of two-out trouble in the second inning. The third and fourth proved uneventful with Chicago still in front. The “goose egg” scoreboard indicators were way too familiar for Dodgers veterans. Dating back to October 1956, the proud franchise had zeros displayed in 40 of the past 41 World Series innings. With two down in the top of the fifth, “the worm finally turned” for Los Angeles, accompanied by a “surprise splash.” Neal connected off Shaw for a long drive to left. Al Smith backed up against the nine-foot wall only to watch the ball sail into the lower stands for a home run, and ended up drenched in the face by a cup of beer that was inadvertently knocked off the ledge by a first-row fan.8 The Dodgers now trailed 2-1.

Shaw maintained the slim White Sox advantage until the seventh. With two outs, Alston sent up Chuck Essegian, a former Stanford fullback, to pinch-hit for Podres. Essegian deposited Shaw’s 3-and-1 pitch into the left-center-field upper deck to tie the score.9 Then Shaw walked Jim Gilliam, and Charlie Neal smoked a one-strike pitch deep to center field that was caught by Billy Pierce. The trouble with the slick grab was that Pierce backhanded Neal’s blast while warming up in the White Sox bullpen.10 Neal’s second homer of the game put Los Angeles on top for the first time in the Series, 4-2. Shaw was replaced by right-hander Turk Lown, who tamped down the Dodgers’ sudden scoring momentum.

In the bottom of the seventh, Alston penciled reliever Sherry into Larker’s lineup spot. Ron Fairly entered as the right fielder and would bat ninth, while Don Demeter replaced Duke Snider in center. Sherry retired the top of the lineup with no problem while Chicago’s stunned spectators remained silent. Rivera was substituted for McAnany in right field in the eighth, and Lown dispatched the Dodgers in order. The 24-year-old Sherry, called up at midseason from Triple-A St. Paul, had initially been used as a starter. However, armed with a new-found slider, he won headlines as a valued relief specialist.11

In the bottom of the eighth, Sherry faced the heart of the White Sox order. Kluszewski started things with a bloop single to center, and Lollar reached when his hard bounder glanced off Gilliam’s glove.12 With a rally brewing, the crowd resurrected its vocal support and foot stomping. Earl Torgeson ran for Kluszewski at second and Lopez decided to play “small ball” to move both runners along. With orders to bunt, Smith fouled a pitch and took a strike before watching three pitches out of the zone.13 Both runners were moving on the full count when Smith boomed a deep drive to left-center. Torgeson played it past halfway before he headed home after the ball sailed over Moon’s head and one-hopped the wall. The slow-footed Lollar momentarily lost sight of Smith’s drive and paused briefly at second base.14

After hesitating, Lollar ran for third, where coach Tony Cuccinello was waving frantically and yelling, ‘Go! Go!’ since he was sure Lollar could make it safely home to tie the game. Cuccinello gambled that center fielder Demeter would have to chase Smith’s ball down, and that the Dodgers would throw to third to keep the potential winning run at second.15 But Moon swiftly grabbed Smith’s knock on its rebound from the wall, and wheeled to throw a strike to the cutoff man, Wills, in short left. Wills turned and cut loose a relay peg that catcher Johnny Roseboro caught chest-high with Lollar still over 10 feet from home plate. Lollar did not slide and tried to sidestep Roseboro, but the tag was made. Plate umpire Frank Dascoli had an easy call as he signaled the out.16

Smith advanced to third base on the throw home, but the Dodgers still held a 4-3 advantage.  Goodman struck out as a pinch-batter, and Rivera popped foul to Roseboro to strand the tying run. Los Angeles left a runner on second in its ninth, and Sherry induced groundball outs from pinch-hitter Norm Cash, Aparicio, and Fox to even the series at a game apiece in 2:21.

Line-score numbers showed four runs, nine hits, and one error for the Dodgers and three runs, eight hits, and no errors for the White Sox. Podres was the winning pitcher and Shaw, after allowing three home runs, the loser. Sportswriters surrounded Neal and Essegian to ask about their home run prowess,17 while Sherry sat relatively calm.18 Podres said he felt San Francisco and Milwaukee were better teams than the White Sox.19

Lopez was slightly ruffled as he described the Dodgers’ long-ball attack: “All the home runs came on bad pitches. Bob Shaw was a bit high all day.”20 Cuccinello was on the “hot seat” for sending Lollar home in the eighth, but Lopez backed his coach’s decision, saying, “I can’t criticize Cooch. It was the right play. It just didn’t work.”21

As he changed clothes, Alston showed reporters that he had mistakenly put on a pair of mismatched socks that morning before leaving for the game. Revealing a superstitious side, he laughed and said, “You can bet I’ll wear the same mixed-up pair of socks tomorrow and the next day.”22

On a sad note, and for the second successive day, a fan was fatally stricken at the ballpark. After complaining of chest pains, Herman Ruschel of Dubuque, Iowa, collapsed and was pronounced dead at Mercy Hospital.23

In addition to the sources cited in the Notes, the author accessed Retrosheet.org, Baseball-Reference.com, Newspapers.com, SABR BioProject, and The Sporting News archive via Paper of Record.