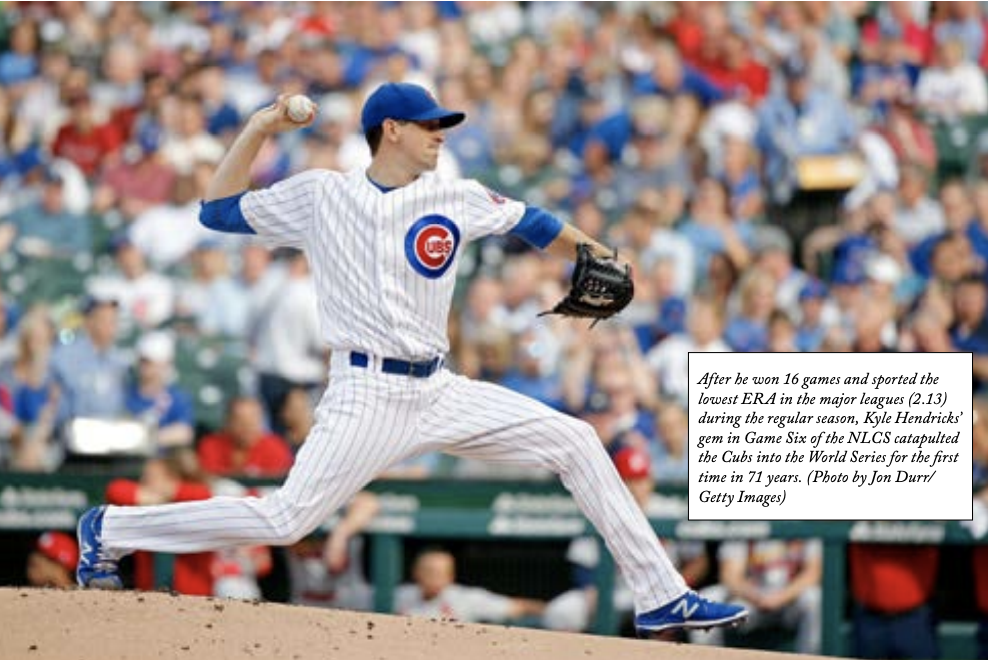 “The Cubs are going to the World Series,” gushed the North Siders radio broadcaster, Pat Hughes. “The Cubs win the pennant.”1 The long-suffering lovable losers systematically dismantled the Los Angeles Dodgers and beat the best pitcher on the planet to capture their first NL flag in 71 years.

There was an electric mood at Wrigley Field on Saturday night, October 22. That contrasted sharply with a sense of dread among Cubs fans just four days earlier in Los Angeles when the Dodgers knocked around staff ace Jake Arrieta for four runs in five innings to take a 2-1 lead in the best-of-seven NLCS. But following skipper Joe Maddon’s script to win every inning, the Cubs outplayed the Dodgers in the next two games at Dodger Stadium to move to the precipice of their first trip to the World Series since the end of World War II.

All the pregame hype centered on the contest’s two pitchers: Dodgers skipper Dave Roberts counted on Clayton Kershaw to prolong their season. The southpaw, a three-time Cy Young Award recipient, had been limited by back pain to just 21 starts in the regular season but posted a 12-4 slate with a 1.69 ERA. He copped the win in Game Two by tossing two-hit ball over seven innings; however, in his career he had uncharacteristically struggled in the postseason, as evidenced by his 4.79 ERA, more than two runs higher than in the regular season. Toeing the rubber for the North Siders was soft-tossing right-hander Kyle Hendricks, who had morphed from the team’s fifth starter to wunderkind, leading the majors with a 2.13 ERA to go along with a 16-8 slate in his third full season.

Two years removed from a 73-89 record and a last-place finish in the NL Central Division, the Cubs (103-58 in the regular season) were a loose, exuberant bunch, mirroring Maddon’s temperament. The former Tampa Bay Rays pilot arrived in 2015 and immediately established a laid-back culture of winning. It was a youthful team, too, with five starting position players for this game 24 years old or younger. One of those players was rookie Albert Almora, who surprisingly got the nod in right field over three-time Gold Glove Award winner Jayson Heyward (and his $184 million contract), whose season-long batting slump was well documented and had gotten worse in the playoffs (he was just 1-for-16 in the NLCS). Earlier in the afternoon the team received an emotional boost when club officials announced that slugger Kyle Schwarber, out since April 7 with a knee injury, would be available for DH duty if the Cubs reached the World Series.

The hundreds of Wrigleyville bars had been humming before noon in anticipation of the game. By the 7:09 P.M. start time, the 102-year-old stadium was packed with 42,386 partisan fans in a sea of Cubbie blue. They had been stirred up by former Cubs star Kerry Wood, of 20-strikeout fame. He threw out the ceremonial first pitch decked in a number-10 jersey in honor of Hall of Famer, Cubs icon, and longtime announcer Ron Santo, who had died in 2010.

The Dodgers came out swinging. Leadoff hitter Andrew Toles sent Hendricks’ first pitch to right field for a single. NL Rookie of the Year Corey Seager grounded the next pitch to second baseman Javier Baez, who chased Toles out of the basepath, tagged him, and swiftly tossed to first for a twin killing. The flashy infielder from Puerto Rico pumped his chest as the Wrigley crowd went wild. Hendricks, a model of consistency all season, retired Justin Turner to end the inning and was just getting his groove on. Save for a Baez error in the second, Hendricks set down every hitter he faced until he yielded a one-out single to Josh Reddick in the eighth.

Psychologically, the game was decided in the bottom of the first inning. Cubs leadoff hitter Dexter Fowler pounded a 1-and-1 pitch to right field for a ground-rule double. Kris Bryant, who followed his Rookie of the Year Award in 2015 with an MVP trophy in 2016 (39-102-.292), clubbed a single to right to drive in the first run. Toles took his eyes off Anthony Rizzo’s liner to left field and committed a costly blunder; and suddenly there were runners on second and third with no outs. Super sub Ben Zobrist, a longtime Maddon favorite on the Tampa Bay Rays and a World Series champion with the Kansas City Royals in 2015, knocked in Bryant on a deep sacrifice fly. Kershaw escaped without further damage but seemed taxed. He tossed 30 pitches, his most in the first inning of any game since 2011; it was also the first time he had given up two first-inning runs the entire season.

The Cubs tacked on another run in the second when Addison Russell led off with a line-drive double to left field and scored on Fowler’s two-out single. Fowler was thrown out at second trying to stretch the hit. The Cubs’ 3-0 lead recalled a few ghosts of games past. In Game Six of the 2003 NLCS, the Cubs were just five outs from the World Series and led the Florida Marlins, 3-0, in the top of the eighth when spectator Steve Bartman interfered with a potential catch by outfielder Moises Alou. The Marlins then scored eight runs that inning to win the game and captured the pennant in the next contest. In 1984, the Cubs led the San Diego Padres, 3-0, in the bottom of the sixth in the deciding Game Five of the NLCS, yet lost, 6-3.

This game offered no haunting images of lovable losers. Venezuelan native Willson Contreras led off the bottom of the fourth with a screeching line-drive home run and raised his hands over his head in celebration as he rounded the bases and crossed home plate for the Cubs’ fourth run. It was the eighth hit in 19 postseason at-bats for the 24-year-old rookie, who had platooned behind the plate with Miguel Montero.

In the fifth, the Cubs added their fifth and final run when Rizzo took Kershaw yard over the right-center-field fence. Just 26 years old, Rizzo was the only Cubs starter to have played on the team’s three horrendous last-place teams (2012-2014). When Theo Epstein was named team president and Jed Hoyer GM after the 2011 season, one of their first moves was the acquisition of Rizzo from the San Diego Padres, where Hoyer had served as GM. Since then Rizzo, who had also been in the Red Sox organization, had developed in to a three-time All-Star and team leader.

The rest of the game was a smile fest for the Cubs as the Dodgers could not figure out Hendricks’ array of cutters, sinkers, changeups, curves, and four-seam fastballs that topped out at about 90 miles per hour. The highlight for the rest of the game might have been when Chicago Bulls legend and NBA Hall of Famer Scottie Pippen sang “Take Me Out to the Ball Game” in the seventh-inning stretch. By that time, reliever Aroldis Chapman had replaced Hendricks with one out in the eighth and secured the last five outs. The Cuban-born flamethrower had been acquired in a blockbuster deal with the New York Yankees near the trading deadline and gave the Cubs a lights-out closer. Curaçaoan Kenley Jansen, himself one of the hardest throwers in baseball who vied for the mantle of best reliever in baseball, replaced Kershaw to start the sixth and set down all nine Cubs batters he faced. With Dodgers pinch-hitter Carlos Ruiz on first via a walk, Chapman induced his countryman Yasiel Puig to ground weakly to shortstop Addison Russell, who initiated a game-ending 6-4-3 twin killing, giving the Cubs the 5-0 victory in 2 hours and 36 minutes, and more importantly sent them to the World Series.

“The Cubs are celebrating on the mound,” said Hughes on WSCR 670. “Anthony Rizzo waving the to the fans. Bear hugs. High fives. Handshakes. Laughter. What a great scene.”2

“I thought we played one of our best games all year tonight,” said Maddon. “The defense, the pitching, the hitting – that was a complete game of baseball.”3 The Cubs dominated the last three games, outscoring (23-6) and outhitting (33-17) the Dodgers in a convincing team effort. Baez (7-for-22 with four doubles and five RBIs) was named series co-MVP with pitcher Jon Lester (two earned runs in 13 innings; one win). The story of this game was the Cubs starter, the David who outdueled the Dodgers Goliath. “Hendricks may not be the best pitcher on the planet,” gushed Cubs beat writer Paul Sullivan, “but he might be the smartest. He was lost in Kershaw’s shadow.”4

Three days later, the Cubs were in Cleveland to face the Indians in a much-anticipated World Series matchup between two clubs, each of which owned the longest championship drought in its respective league.