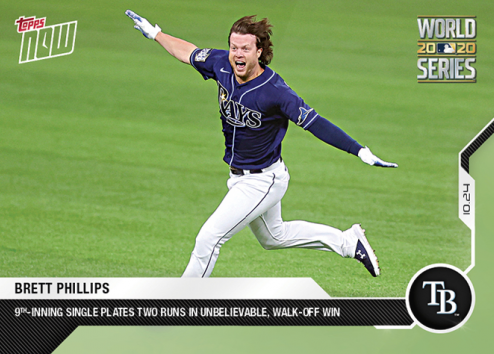 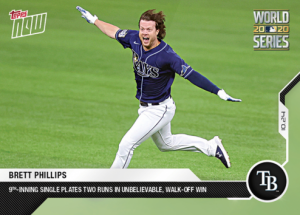 Momentum in the 2020 World Series had swung back and forth through the first three games. Tampa Bay tied the Series in the second game but lost to the Dodgers in Game Three to fall behind again. Now they were looking to swing the pendulum back in their favor in the fourth game.

Tampa was the home team at neutral Globe Life Field. Rays manager Kevin Cash went to Ryan Yarbrough for the start. Yarbrough, one of the Rays starters in the pandemic-shortened season, had gone 1-4 with a 3.56 ERA. He pitched two-thirds of an inning in relief of Tyler Glasnow in the Series’ first game.

The Dodgers jumped on the southpaw in the first when Justin Turner hit a two-out blast over the center-field wall, a repeat of the previous game, when his blast gave the Dodgers a quick lead. It was the first time a player homered in the first inning of consecutive World Series games. Turner’s 12th postseason round-tripper tied Duke Snider for the most in Dodgers history.

Yarbrough pitched a scoreless second, but the Dodgers added another run in the third, again with two outs. This time it was Corey Seager, who sent a two-strike curveball over the right-field fence to give the Dodgers a 2-0 lead. It was his eighth home run of the postseason, tying him with four other players—including Randy Arozarena, the Rays’ rookie phenom.

Dodger manager Dave Roberts handed the ball to Julio Urias for Game Four. The left-hander, just the fourth Mexican-born pitcher to start a World Series game, had finished the short season with a 3-0 record and a 3.27 ERA. He had also recorded victories in every postseason series for the Dodgers, including two wins against the Braves in the NL Championship Series.

Urias kept the Rays in check through the first three innings, striking out five and surrendering just one hit, a single by Arozarena in the first. But in the fourth, Arozarena led off and hit the first pitch from Urias, a fastball, over the center-field wall. It was his ninth round-tripper of the postseason, the most in a single postseason to date.

The Dodgers added another run in the top of the fifth. Pete Fairbanks, their third pitcher of the game, was now in the mound

Fairbanks surrendered a one-out single to Seager. A wild pitch moved him to second. With the Rays using a four-man outfield configuration to protect against a double, Max Muncy hit a line-drive single to right field. Hunter Renfroe’s throw was not in time to get Seager, but catcher Mike Zunino’s throw nailed Muncy at second to end the half-inning.

Renfroe made up for his errant throw in the bottom of the inning when he hit a leadoff home run, narrowing the gap to one run once again. After Urias struck out the next two batters, manager Roberts replaced him with Blake Treinen, who got the final out.

In the sixth Cash, who was not shy about using his bullpen, called on Diego Castillo. The right-hander walked two batters. After getting Chris Taylor to fly out for the second out, it appeared he might get out of trouble. But Enrique Hernandez doubled home a runner, putting the Dodgers back in front by two.

Treinen gave up a leadoff single to Arozarena in the bottom of the frame. It was the rookie’s 26th hit of the postseason, tying Pablo Sandoval’s record set in 2014. Pinch-hitter Ji-Man Choi drew a walk. After Treinen struck out Austin Meadows, Roberts replaced Treinen with Pedro Baez with the Rays’ Brandon Lowe coming to bat.

Baez, a right-hander, had been devastating against lefties during the season. After throwing three changeups and getting two strikes against Lowe, Baez switched to his fastball. Lowe watched the first one but was ready for the second, which he sent sailing over the center-field wall to put the Rays ahead for the first time, 5-4.

Cash went back to his bullpen again in the seventh, sending southpaw Aaron Loup to the mound. Seager singled and Turner doubled to start the inning. Loup struck out Muncy, then Cash replaced him with right-hander Nick Anderson, who struck out Will Smith and then intentionally walked Cody Bellinger with two outs. Joc Pederson lined a ball to right. Lowe, who was playing shallow right in a defensive shift, made a dive for the ball but it bounced of the tip of his glove and two runs scored. The Dodgers were back in front, 6-5.

Roberts made several defensive moves when the Dodgers took the field. He moved Taylor from left to center when Bellinger developed back problems and sent Pederson to left. Roberts had also planned to replace Baez but changed his mind when the Dodgers grabbed the lead.

With one out, Roberts watched Baez surrender a solo home run to Kevin Kiermaier to tie the game. “I take blame for having him go back out,” Roberts said later.1

The Dodgers reclaimed the lead in the eighth. Taylor led off with a double off Anderson. With two outs, Seager hit an opposite-field single to send Taylor across the plate. John Curtiss, the Rays’ seventh pitcher, replaced Anderson and got the final out, but the damage was done.

After the Rays failed to score in the eighth, they came to bat in the ninth facing Kenley Jansen. The Dodgers closer led the team with 11 saves during the season. But in his only appearance in the World Series, he had surrendered a home run to Arozarena the night before.

Jansen struck out pinch-hitter Yoshi Tsutsugo but Kiermaier hit a single to shallow right field. Joey Wendle then smashed a line drive straight into Pederson’s glove. Needing just one more out for the save, Jansen couldn’t come through and walked Arozarena.

This brought up Brett Phillips, who had entered the game as a defensive replacement in the top of the inning. He had joined the Rays in a trade with Royals in August for minor leaguer Lucius Fox. Phillips, who batted just .196 during the season, had two plate appearances in the postseason and neither had produced a hit.

After taking a ball and watching two strikes, Phillips was down to his last one. Jansen threw inside and Phillips made contact. The ball sailed into right field. For a moment, it looked as if the Rays might end up just tying the game. Then the craziness began.

The ball bounced off Taylor’s glove. Kiermaier scored the tying run as he bolted home from second. Arozarena was heading into third as he watched Taylor’s mistake. When he saw what happened, he dashed around third and headed for home.

But he stumbled halfway down the line. Minus his helmet, he backed toward third. When he saw catcher Will Smith lose the ball on the throw to the plate, he changed direction and slid headfirst across the plate with the winning run.

“[Arozarena] pounded home plate with his right hand while Phillips was chased down by teammates in left field.” Roberts, watching it all from the dugout, described the play as a “perfect storm.”2

Phillips suddenly became an unlikely hero. “Once I saw Randy slip, I was like ‘Aw shoot, at least we tied it up,’ and then he missed the ball. I don’t know what happened but then he scored. The next thing I know I’m airplaning around the outfield and I get dogpiled.”3

Kiermaier, who had been with the Rays longer than any other player, said, “The baseball gods were on our side. I was the happiest man on the planet to see Randy score just so the game could be over with. I couldn’t have taken any more.”4

The win tied the series at two games apiece. The surprise victory was the Rays’ third walk-off win in a postseason and the first time that they did it in the World Series. It also just the fifth time a World Series game ended with a walk-off sending the winning run across the plate on an error. The win gave Tampa renewed hope that they could still claim their first World Series crown after the Dodgers lost what many thought was a sure win.

Phillips grew up in the Tampa area watching the Rays and dreaming of playing for them some day. “It’s definitely crossed my mind like every kid out there,” he said. “Definitely want to extend some advice to all the kids out there. Keep dreaming big. These opportunities are closer than you think, and they can come about. So just keep dreaming big, kids. Things like this do happen. And it’s awesome.”5

In addition to the sources cited in the Notes, I also used the Baseball-Reference.com and Retrosheet.org websites for box score, player, team, and season pages, pitching and batting logs, and other pertinent material.